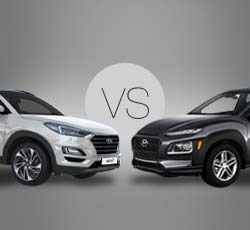 2020 Tucson vs Kona - How do they stack up? What are the differences?

SUVs have become the ideal family vehicle and do not seem to be losing popularity anytime soon. Hyundai has made a name for themselves by creating a line of SUVs that are both affordable and practical. Due to how many offerings they have, however, it can be difficult for a buyer to decide which model is best suited for their life.

Both the 2020 Hyundai Tucson and the 2020 Hyundai Kona have room for five people. On the one hand, the Tucson is larger. On the other, the Kona is more affordable. Looking closer at both options will also reveal a few more differences between these two very similar SUVs that may help consumers choose.

For this guide, the most important aspects of both vehicles have been broken down and compared. Things such as power, cargo space, and features are explored. After reading, the goal is for buyers to be able to make a more informed decision when picking between a new Tucson and new Kona.

Those wanting the bigger of these two SUVs will want the Tucson. At 176.2-inches, it is just over a foot longer than the Kona, which measures in at 164-inches even. The width of these two vehicles is closer, with the Tucson being 72.8-inches when not including the mirrors and the Kona being 70.9-inches.

Leg room for the front seats is actually identical between these two Hyundai SUVs. In the rear row, however, passengers in the Tucson get 38.2-inches, which can feel like quite a bit more than the 34.6-inches in the back of the Kona. Head room is also identical for both the Tucson and the Kona in the front. Numbers are similar between the two for the second-row as well, with the Tuscon once again have a bit more. Due to not being as wide as the Tucson, the Kona also has less shoulder room for both rows of seating.

As far as cargo goes, neither of these SUVs are especially roomy. That said, the Tucson will hold significantly more than the Kona. It gives drivers 31-cubic feet to fill behind the second-row and 61.9-cubic feet when that row is folded flat. Compare that to the Kona, which has only 19.2-cubic feet behind the second-row and a maximum capacity of 45.8-cubic feet. Both vehicles come with a 60/40 split-folding rear seat and can be equipped with a power liftgate.

The Kona's real claim to fame is its exterior appearance. This SUV has a quirkier look than the more traditional Tucson. Drivers will find that the Kona features more black accents as well as LED lighting, plus more dramatic shapes for the lights, making it feel a bit more modern. The more classic look of the Tucson may be more appealing to buyers. Wheel sizes for the Kona range from 16-inches up to 18-inches. The Tucson offers a range of 17 to 19-inches instead.

Unsurprisingly, Hyundai has given the Tucson a bigger standard engine than the Kona. For the Kona, lower trim levels are powered by an inline four-cylinder engine with the ability to create 147-horsepower and 132 lb-ft of torque. Drivers will find that higher trim levels of the Kona up their game with a turbocharged 1.6L four-cylinder that can make 175-horsepower and 195 lb-ft of torque. While the less powerful engine is paired with a six-speed automatic, the turbocharged option will give drivers a dual-clutch seven-speed automatic engine.

Now for the Tucson. Its standard engine is a 2.0L four-cylinder generating 161-horsepower and 150 lb-ft of torque. Upper trim levels of the 2020 Tucson go with a 2.4L four-cylinder engine that can produce 181-horsepower and 175 lb-ft of torque. A six-speed automatic transmission is standard across the board here. While the standard engines of these two SUVs are quite different in power, the upgraded options actually offer similar numbers.

As for the drivetrain, buyers will get front-wheel-drive standard for both the Tucson and the Kona. Both SUVs also offer all-wheel-drive models. The Tucson has a maximum towing capacity of 2,000 pounds with the more powerful engine and when properly equipped. While drivers can technically tow with the Kona, it is not recommended. This SUV has a ground clearance of just 6.7-inches, further reducing its practicality for certain uses.

The Kona will give drivers considerably better numbers than the Tucson when it comes to fuel efficiency. With its standard engine and front-wheel-drive, it offers 27mpg in the city and 33mpg on the highway. All-wheel-drive makes these number dip slightly, with 26mpg city and 30mpg highway. Buyers can also go with the turbocharged Kona engine without sacrificing too much. In fact, front-wheel-drive models do even better in the city, getting 28mpg. On the highway, the drop down to 32mpg. All-wheel-drive models with the turbocharged engine are able to get 26mpg city and 29mpg highway.

It is worth noting for drivers that the Tucson has a bigger fuel tank. This SUV can hold up to 16.4 gallons at a time. On the other hand, the Kona holds only 13.2 gallons. Despite being more fuel efficient, the Kona will likely need to make more frequent stops at the pump.

Despite the difference in size, these two vehicles offer pretty much the same turning radius, making their maneuverability very similar. That said, the Kona will obviously be easier to fit into tight parking spaces. While in motion, however, both vehicles offer responsive handling and a smooth ride.

Quality-wise, these two SUVs offer drivers very similar cabins. Cloth seating surfaces, which are both durable and stain-resistant, are standard for both. Going to the top of the trim ladder for either model will unlock the ability to have leather upholstery as well. Buyers can get either SUV with things like power-adjustment for the front seats, heated front seats, and a leather-wrapped steering wheel and shift knob.

Both the Tucson and the Kona call their top trim the Ultimate. They both have many luxury features for drivers to enjoy. At the same time, the Tucson Ultimate has things like ventilated front seats and heated rear seats, two features that are unavailable for any version of the Kona. Both of these trim levels do have more safety features and things such as navigation standard, however.

These two closely related SUVs also have similar technology inside their cabins. They both come with a 7-inch touchscreen, for example. Buyers can choose to have an 8-inch touchscreen with either model as well, provided they go with an upper trim level. Smartphone integration is standard for the 2020 Tucson and the 2020 Kona using Android Auto and Apple CarPlay. While a six-speaker audio system is standard for both, an eight-speaker premium system from Infinity is also available for either model.

A Multi-Information Display screen of 3.5-inches can be found in most trim levels of both these SUVs. This is where the vehicle shows drivers important information such as distance to empty, elapsed time, fuel consumption, and more. For the top trim levels of both models the screen size jumps up to 4.2-inches and gains color.

Standard for all models of the Tuscon and the Kona is a dual-level cargo floor. This is a handy way of hiding valuables and maximizing cargo space. For the Kona, this is a particularly important feature that may help make up for its other shortcomings as far as practicality goes.

Hyundai equips most of its vehicles with a similar setup of standard driver aids. Both the Tucson and the Kona have a driver attention monitor, lane-keeping assist, a rearview camera, and forward-collision warning with automatic emergency braking. With the exception of the entry-level model of both SUVs, all trim levels also come with a blind-spot monitor featuring rear cross-traffic alert.

At the Limited trim level, the Tucson adds a surround-view camera system. The Ultimate versions of both vehicles also add pedestrian detection as well as Hyundai's Smart Cruise Control feature to their list of standard equipment. Select trims of both models can also give buyers convenient features such as high-beam assist and rain-sensing windshield wipers.

Interestingly enough, the top-of-the-line Kona comes standard with a heads-up display. This is not a feature that is available for any version of the Tucson. The Kona Ultimate even has a fancy welcome animation sequence on the display when drivers start the vehicle. If a head-up display is a priority for shoppers looking at the Tuscon and the Kona, the list of options is quickly reduced down to one.

The Kona has received five out of five possible stars in crash testing from the National Highway Traffic Safety Administration. It got five stars in both front and side crash-testing and four stars in rollover testing. The 2020 Tucson received identical ratings from the NHTSA, making either SUV an option families should feel confident riding in.

These two SUVs both represent good vehicle options. The Kona is going to be cheaper up front and will save in fuel costs over time. In fact, buyers can get an entry-level model Kona for about three grand less than an entry-level Tuscon. However, it might be too small for families with older children or for those who like to pack up and go on road trips. The ability to fit into tighter parking spaces is really the only advantage of the size here.

The Tucson, on the other hand, has a lot more space. It may not be large by many standards, but it certainly feels like it is when compared to the Kona. The extra legroom and cargo space alone will be enough to entice some buyers. Plus, its standard engine is significantly more powerful than that of the Kona.

Despite not being as fuel efficient, the Tucson is going to be the right call for most drivers looking for a family vehicle. Its extra space does not come with too much extra cost and will do a better job of growing with families. The Kona may be better suited for someone looking for a daily commuter that can double for a weekend getaway vehicle with a couple of friends.

Save Money on a 2020 Hyundai Tucson:
Are you Shopping for a New Vehicle? Find the Best Deals with "Free - No Hassle" Prices Quotes.