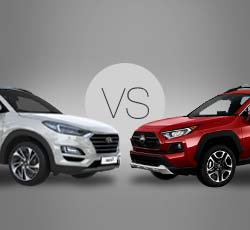 The 2020 Hyundai Tucson and 2020 Toyota RAV4 are both reliable, two-row SUVs that come with a lot of value. They share many features, such as available all-wheel drive, a roomy interior, and driver-assist systems. When looking at these two models, it's clear that the two companies have put a lot of effort into building modern vehicles that will appeal to drivers with high expectations. Upon further examination, though, some differences are revealed, and this guide will show potential customers how the Tucson and RAV4 stand out in their own ways.

It's a good idea to start the head-to-head match-up by going under the hood of these two SUVs. What first jumps out is the fact that both the Hyundai Tucson and the Toyota RAV4 give people a few options in terms of the powertrain. This makes the vehicles more appealing, in general, as it gives customers the opportunity to decide whether they want to pay more for more capability.

The Tucson's SE and Value trims are powered by a 2.0-liter engine that can provide 161 horsepower and 150 pound-feet of torque. The SEL, Sport, Limited, and Ultimate trims all get upgraded with a larger engine that has a displacement of 2.4 liters. It can generate 181 horsepower and 175 pound-feet of torque, a noticeable improvement. In comparison, the Toyota RAV 4 has a 203-horsepower, 2.5-liter engine as its standard version. There are hybrid trims of the RAV4 that can generate a net 219 horsepower with the use of a 2.5-liter engine and an electric motor.

By having a hybrid as an available model, Toyota has made its RAV4 appeal to a broader audience. Hybrids are becoming more and more popular, and it's a bonus that the hybrid RAV4 does better in many regards than its non-hybrid counterpart. No longer are the days in which hybrids were not as capable as other vehicles.

The hybrid RAV4 is very efficient, capable of achieving a combined 40 miles per gallon. If efficiency is important to potential customers, it would be hard to pass up the opportunity to drive one of Toyota's hybrid SUVs. The other RAV4 models can earn up to an estimated 30 miles per gallon. This is still a respectable number, but not quite at the same level. The Hyundai Tucson is estimated to be able to travel 28 miles per gallon on the highway and 22 miles per gallon in the city, giving it a combined fuel economy of 25 mpg.

With either vehicle, people can choose whether to get all-wheel or front-wheel drive. On the Tucson, the two available engines are paired with a six-speed automatic transmission with SHIFTRONIC, a system that allows drivers to manual shift gears if they want to.

The RAV4, since it has many more trims than the Tucson does, gives customers a lot more to think about. The LE, XLE, XLE Premium, and Limited can come with front-wheel drive or all-wheel drive; the Adventure and TRD Off-Road trims are only offered as all-wheel drive models; and the LE Hybrid, XLE Hybrid, XSE Hybrid, and Limited Hybrid come with an electronic all-wheel drive system as a standard component. Drivers will appreciate having an eight-speed electronically controlled automatic transmission if the traditional engine is selected. It's responsive, and it allows the engine to perform well at various speeds. Likewise, the electronically controlled continuously variable transmission on the hybrids is a well-built component.

Towing capacity can highlight the similarities between the vehicles. The Tucson's base engine will give people a towing capacity of 1,500 pounds, and this is increased to 2,000 pounds if the more advanced engine is selected. On the RAV4, up to 1,750 pounds can be towed if the hybrid engine is utilized; otherwise, towing capacity is also 1,500 pounds. While these SUVs aren't suited for heavy-duty towing, they can do the job if someone only occasionally hauls cargo.

Both models provide a comfortable ride, with the RAV4 being a little more responsive give its more powerful engine. To some, the Tucson might feel more like a crossover than a traditional SUV like the RAV4, which has a sportier feel and a slightly louder cabin in terms of the engine noise that comes through. This means that the RAV4 might be more suited to more aggressive driving or dealing with difficult terrain, while the Tucson would be more ideal for people who spend most of their time on the pavement. As mentioned previously, Toyota makes the Adventure and TRD Off-Road versions of the RAV4. These would be perfect for those drivers who plan on doing a lot of driving in rugged areas.

Cargo area is an important consideration when looking at these types of vehicles. Either model will give people plenty of room to store their items. With rear seats up, the Tucson has 31 cubic feet of cargo room and the RAV4 has 37.6 cubic feet of cargo room. Those rear seats can be folded down in both vehicles to expand maximum cargo capacity to 61.9 cubic feet in the Tucson and 69.8 cubic feet in the RAV4. Since the rear seats in the two vehicles have a 60/40 split-layout, it gives people some flexibility in terms of how they arrange the cabin. One side or both sides can be lowered to create more room for gear.

To make the ride more pleasant, the Tucson and RAV4 have advanced infotainment systems. These do a great job of keeping people entertained and in touch with their friends or family while on the road. The base model of the Tucson has a seven-inch touchscreen, Android Auto, and Apple CarPlay. The mid-level trims get the addition of HD Radio and SiriusXM Radio, and the Ultimate (which is the highest trim) comes with an eight-inch touchscreen with navigation. For extra convenience, the top three Tucson trims have wireless charging.

The RAV4 has similar components. The lower trims also have seven-inch touchscreens and smartphone compatibility, but they come with Amazon Alexa and SiriusX Radio as well. The mid-level trims have the option to upgrade to an eight-inch touchscreen. This system includes HD Radio in addition to all of the previously mentioned features, and an enhanced version includes 11 JBL speakers. The upper trims have that JBL technology in their sound systems, and perhaps their biggest perk is navigation with voice recognition.

Hyundai and Toyota are two companies that have made it a priority to build vehicles with multiple safety mechanisms. Of course, there are the standard air bags that are in place to protect all passengers through their positioning in the front, sides, and roof of the vehicles. There is also a tire pressure monitoring system so drivers can recognize when their tires need more air. Stability control, traction control, crumple zones, and anti-lock brakes are other vital components in the Tucson and RAV4.

In addition to all of this, there are several driver-assist technologies built into these models. The Hyundai Tucson can come with collision warnings that can alert drivers to vehicles in their blind spots, behind them as they're backing up, or in front of them. With forward collision-avoidance assist, which is a standard feature, the Tucson can hit the brakes on its own if it determines that the action is necessary to prevent an accident. The Tucson also has available lane keeping assist and a driver attention warning system. On higher trims, a surround view monitor is included.

The safety package on the Toyota RAV4 is a bit more comprehensive, especially when taking a close look at what the base model comes with. Each RAV4 is equipped with Toyota Safety Sense 2.0. It consists of a pre-collision system that can detect other vehicles or pedestrians, a lane departure alert/assist program that can correct steering when necessary, and lane tracing assist.

Further, the RAV4 has automatic high beams, road sign assist, and a dynamic radar cruise control function makes adjustments to acceleration and braking to maintain safe distancing with other vehicles. This advanced cruise control program works at all speeds. On the Tucson, the system is called "Smart Cruise Control with Stop & Go". Unlike the Toyota's system, which is standard, the Tucson only offers this on the Ultimate trim.

It comes down to finances for many customers, and the Tucson is the more affordable option. Its base model starts at around $23,500, and on the other end of the spectrum, the Ultimate comes in at just under $32,000. In contrast, the LE trim of the RAV4 has a starting price of $25,950, and the prices jump pretty significantly from there. The most expensive RAV4 is priced at $36,880, and several models have MSRPs well above $30,000.

As the saying goes, people get what they pay for. This is true with the RAV4, as it feels a bit more high-end in a few key areas. If anyone prefers to drive a vehicle with comparatively more horsepower and more safety features, the RAV4 would seem to make the most sense. However, not everyone has the extra money to spare. When taking all of its advantages into consideration, the Tucson is still impressive given its competitive starting price.

When deciding between the 2020 Hyundai Tucson and the 2020 Toyota RAV4, there doesn't need to be any concern that one would be making the wrong choice. The truth is that both of these vehicles are nicely equipped with quality components under the hood, on their exteriors, and inside their cabins. It basically comes down to what people find to be most important.

For anyone who wants a very comprehensive safety and infotainment system, along with a more exciting engine, the RAV4 would be the winner. If someone thinks 181 horsepower would be plenty, the Tucson would be a fine choice. It's a model that would appeal more to customers on a limited budget, but it gives them a treat with all of its high-tech components.

Note that the RAV4 is the only model with the hybrid option, so this is definitely something to pay close attention to if anyone wants to limit his or her gas consumption.

Save Money on a 2020 Hyundai Tucson:
Find New Car Clearance Prices - Many Vehicles are Selling Below Dealer Invoice Prices.