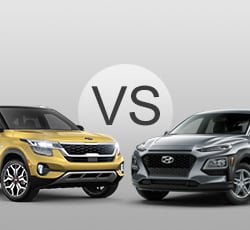 SUVs that are smaller than average may be very appealing to certain customers. While being agile, efficient, and easy to park, they also have some versatility in their cabins. Plus, the open layout of compact SUVs is preferred by many drivers. The 2021 Hyundai Kona and Kia Seltos are two models that are sure to attract a lot of attention from customers who want to drive stylish and modern vehicles that are priced competitively.

There are six trims of the Hyundai Kona, and the first half of the lineup run on 2.0-liter engines with four cylinders. With one of these engines, there would be 147 horsepower and 132 pound-feet of torque. The trims in the top half of the lineup also use four-cylinder engines, but they have turbochargers. These engines are actually a bit smaller than the standard engines, as they have displacements of 1.6 liters. They're able to generate 175 horsepower and 195 pound-feet of torque. This boost in capability should please people who like to have some fun behind the wheel.

It's nearly the same story with the Kia Seltos. Out of the five available trims, the first three use 2.0-liter engines. This engine has the exact same amount of torque as the Kona's standard engine, and the company's specifications state that it has 146 horsepower. (This is one number shy of the mark that the Kona has set.) The turbocharged engine that the top trims get to have is the same engine that the premium trims of the Kona use.

People can definitely feel comfortable buying either a Hyundai or a Kona. These two companies have powertrain warranties that are good for 10 years or 100,000 miles. These warranties are much more generous than what some other companies offer.

Though they may seem about the same size when looking at them from afar, there's a definite difference in the dimensions of these vehicles. The Kona has a length of 164 inches, compared with the Seltos's length of 172 inches. This may affect drivability for some people, especially those that have to park in urban areas. The two models have the same width, but the Kia Seltos is taller and sits higher off the ground. In many ways, it feels more like an SUV while the Kona may seem more like a crossover.

The interior dimensions paint a similar picture. In the Kona, passengers in the second row have 34.6 inches of leg room. The cargo volume in the back measures about 19 cubic feet, and it can be expanded to about 46 cubic feet by folding the rear seats down.

In the Seltos, rear-seat passengers have 38 inches of leg room. Those additional inches can make a big difference in comfort for taller riders. Cargo volume with the rear seats in their upright positions is about 27 cubic feet, and maximum cargo capacity is approximately 63 cubic feet. People who plan on using their new vehicles to transport full loads of passengers or gear are definitely going to want to pay attention to this size discrepancy.

Another factor to consider when thinking of the whole driving experience is the type of infotainment system that a vehicle has. Hyundai has given the Kona a seven-inch touchscreen in most of its trims. That touchscreen comes with Android Auto and Apple CarPlay, as well as Bluetooth. SiriusXM is found on all of the trims except the base model. Wireless charging and a premium sound system with eight speakers are found on four out of the six trims. The top trim of the Kona is upgraded with navigation and it features an eight-inch touchscreen.

From a certain standpoint, the Seltos wins the technology race, since it comes standard with an eight-inch touchscreen and its highest trim has a 10.25-inch touchscreen with navigation. There are other things to consider, though. Every trim has Bluetooth, Apple CarPlay, Android Auto, and Siri Eyes Free, but only the top trim has SiriusXM Satellite Radio. A Bose audio system is found only in the top trim, with the others having six-speaker sound systems. Wireless charging is part of the technology package in two trims.

There are a few safety elements that are standard across the entire lineup of both the Hyundai Kona and Kia Seltos. All of the trims have the LATCH system to tether child seats, three-point seatbelts in every position, traction and stability control systems that can make adjustments as necessary, and tire-pressure monitoring systems.

The Kia Seltos has two things that the Kona does not. The first is Hill Start Assist Control, and the second is Downhill Brake Control. Hill Start Assist Control can be useful when stopped on a slope, facing uphill. It can keep pressure on the brakes while the driver switches from the brake to the gas pedal, and by doing so, it prevents the vehicle from rolling backwards. Downhill Brake Control works in the opposite situation, when the vehicle is going downhill. It engages the brakes so that the drive down a steep hill can be smooth and steady.

However, the Hyundai Kona does better in terms of its driver-assist technology. Starting with its base model, the Kona has automatic emergency braking and forward collision warning to reduce the likelihood of a driver hitting the vehicle in front of him/her. It also has lane keeping assist so that it can stay centered in a lane. An additional component can alert the driver when it seems like he/she isn't completely focused on the road. In a pretty stark contrast, the base model of the Kia Seltos has none of those features.

When moving to the next trim of the Hyundai Kona, many more components are included. People will appreciate having blind spot monitoring, rear cross-traffic alert, and a lane change assist function. The top trim of the Kona is enhanced even further with a parking distance warning system and pedestrian detection.

As mentioned, the Seltos doesn't start out with any driver-assist technology. It's only found in the other trims. On the second trim in the lineup, there are actually many features, including frontal collision warning and emergency braking, driver attention warning, lane keeping and lane following assist, and lane departure warning. At this level, the Seltos has automatic high beams, too. With the Kona, only the top trim of the Kona has automatic high beams.

The mid-level trim of the Seltos has the addition of blind spot monitoring and rear cross-traffic alert. Both of these systems can do more than just monitor; they can also mitigate the situation by correcting steering or hitting the brakes.

The top trim of the Seltos, like the most premium trim of the Kona, has pedestrian detection. Its technology allows it to sense the presence of cyclists in the road as well.

Smart cruise control is found in both the Seltos and the Kona, but only in their most advanced trims. This program can be nice to use on an open stretch of highway. If traffic is moving at a steady pace, these vehicles can maintain a set speed. If traffic slows down, the two models can adjust their speed accordingly.

Hyundai and Kia are known for designing affordable vehicles. The Kona starts out with a competitive price of $20,500 for the S trim. The most expensive trim is the Ultimate, which costs $28,150. The Seltos's LX has a starting price ($21,990) that's a bit higher than that of the Kona. The SX Turbo is the most premium Seltos available, and it costs $27,990.

Since there are six trims of the Kona and five trims of the Seltos, it's not quite a one-to-one comparison across the board. Basically, with each model, there's a modest jump up in price when moving up a trim. For that additional, people can get some nice upgrades.

Some examples are that the Kona's SEL has remote keyless entry and heated front seats, the SEL Plus has a power-adjustable driver's seat and wireless charging, and the Night has special exterior upgrades along with the turbocharged engine. The Limited and Ultimate have leather seats, auto-dimming rearview mirrors, and automatic climate control, with the Ultimate having the best technology.

Regarding the Seltos, the S is the trim at which some driver-assist technology becomes standard. The S trim has a combination of cloth and SOFINO (which is a synthetic leather) upholstery and a leather-wrapped steering wheel. The EX has SOFINO seats and heated front seats, so it feels a little more refined. The S Turbo and SX Turbo feel much more athletic because they have turbocharged engines and 18-inch wheels, with the SX Turbo being the most well-equipped from a technology standpoint.

It's true that the Hyundai Kona and Kia Seltos have some of the same qualities. First of all, they have the same available engines, and they're in a similar price range.

They may seem to be about the same size, but upon closer examination, the Seltos is the larger of the two. It's taller and longer, and it has more interior space. This would make it more ideal for those who need the extra size for their passengers and/orcargo.

In general, the Kia Seltos has a sportier, edgier vibe to it. Perhaps the fact that most of its trims have standard all-wheel drive should be a signal to prospective customers that this model is fairly durable. It has a good amount of technology and safety features, but some might not be satisfied with what's available on the lower trims.

The Kona will likely catch the eye of people who need something for suburban or urban use. It has a decent-sized cargo area, but it should still fit into compact parking spots. On the higher end of its spectrum, it does have some sophisticated elements like leather upholstery. Plus, the standard driver-assist programs should help the Kona stand out.

In the end, it comes down to what factors are the most important for a particular customer. If people prefer all-wheel drive, a generously sized cabin, and a sportier aesthetic, then the Kia Seltos would be a great choice. The Kona would be better suited for drivers looking for compact vehicles that are dependable and somewhat upscale.

Save Money on a 2021 Hyundai Kona:
Are you Shopping for a New Vehicle? Find the Best Deals with "Free - No Hassle" Prices Quotes.