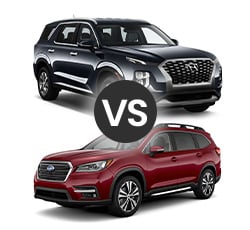 2021 Palisade vs Ascent - How do they stack up? Which is Better?

Three-row SUVs are attractive for many reasons. First and foremost, they have the size that some customers need. They're generally quite capable, and today's models have many high-tech features. The 2021 Hyundai Palisade and Subaru Ascent have many nice qualities, and they're fairly comparable vehicles. This in-depth overview will review how they may be similar, and most importantly, how they differ so that customers can decide which would be the better choice.

While the V6 engine in the Palisade is larger than the four-cylinder version in the Ascent, the two models perform in a similar fashion. An average customer will likely feel that both models handle themselves well and feel responsive. They're strong and capable, as they both have a towing capacity of 5,000 pounds when properly equipped.

There are minor differences, though. The 3.8-liter V6 engine in the Hyundai Palisade has 291 horsepower and 262 pound-feet of torque, and the 2.4-liter Subaru Boxer engine in the Ascent has 260 horsepower and 277 pound-feet of torque. Enthusiasts and professionals would know exactly how this difference in numbers could affect performance in specific situations, but most people would likely be happy to know that either model would give them plenty of power.

A point of interest is that the Subaru Ascent comes standard with symmetrical all-wheel drive. This system is able to monitor how each wheel is doing, and if power needs to be directed to particular wheels because of issues with traction, then the change can be made immediately. Further, every Ascent has X-Mode and Hill Descent Control. X-Mode enhances performance when conditions are really challenging, and Hill Descent Control can limit the SUV's speed when traveling down steep hills.

Hyundai provides the opportunity to get a Palisade with all-wheel drive. If this option is taken advantage of, then the SUV would be able to shift power around when necessary. A Palisade can be locked into all-wheel-drive mode in low-traction situations, and there's also a snow mode that can be engaged. If the Palisade doesn't have all-wheel drive, it would have front-wheel drive. Hill Start Assist Control, which holds pressure on the brakes when it's stopped on a hill, is standard across the lineup, and Downhill Brake Control is found on every model that has all-wheel drive.

The Subaru Ascent uses a lineartronic continuously variable transmission, while the Hyundai Palisade has an eight-speed automatic transmission. The Palisade's transmission comes with a SHIFTRONIC feature that allows drivers to manually shift whenever they want to. It can make a regular drive a little more exciting, and it would certainly appeal to more aggressive drivers who want to be in control over shifting.

The Hyundai also has something called Drive Mode Select. A driver would be able to choose Sport Mode if he/she wants things to be exhilarating, and Eco Mode would make acceleration much less rapid in order to save gas. There's a Normal mode that would strike a balance in the middle.

Given their size, they may take some getting used to if someone has driven a sedan or smaller SUV for many years. That being said, they can be a pleasure to drive, and they offer a little excitement, too.

Since they have very similar exterior dimensions, one would assume that inside their cabins, there would be a comparable amount of space. First, second, and third-row leg room in the Hyundai Palisade is 44.1, 42.4, and 31.4 inches, respectively. In the Subaru Ascent, those numbers are 42.2, 38.6, and 31.7 inches.

In either model, people up front won't have to worry about comfort at all, but those in the third row won't have as much space as they might be used to. It can be a perfect place for kids, and many adults could ride back there on short trips around town. The second row of the Palisade has a generous amount of leg room. The Ascent definitely has enough space in this row for passengers to be comfortable, but the amount of leg room is not particularly remarkable.

With both models, customers have the choice of getting captain's chairs or bench seats in their middle rows. Captain's chairs can make things feel more stately and more spacious, and people will have an easier time getting in and out of the third row. Having bench seats, though, does provide an extra seat.

It's great that SUVs of this size can have three rows of seats, but having the extra row does come at the expense of cargo space. The back cargo area of the Palisade has a volume of 18 cubic feet, and that of the Ascent is slightly smaller. However, a major benefit of SUVs is their versatility. All of the rear seats can be folded down to maximize cargo space. If this is done, the Ascent would have a maximum cargo capacity of 86.5 cubic feet, and the Palisade would have a cargo capacity of 86.4 cubic feet.

As drivers of these vehicles travel around town or go on road trips, they'll be able to rely on smartphone compatibility to stay in touch with others and look up certain types of information. Plus, every Ascent trim has SiriusXM to keep people entertained.

The Palisade's lower trims have eight-inch touchscreens, and the higher ones have 10.25-inch touchscreens with integrated navigation. Bluetooth, Android Auto, and Apple CarPlay are standard, and there's a Rear Seat Quiet Mode in case passengers want to have peace and quiet or prefer to listen to their own media content. Available on the Pasliade are an in-vehcile intercom, a Harman Kardon 12-speaker sound system, and wireless charging. All trims have at five USB ports in the first and second rows, and higher trims have two additional USB ports in their third rows.

A 6.5-inch touchscreen is found in the base model of the Subaru Ascent. Higher trims can have eight-inch touchscreens with navigation. If one is focusing on size only, the Palisade would win this competition. Keep in mind, though, that the Ascent has SiriusXM and available Wi-Fi capability. Its higher trims can have Harman Kardon sound system as well. These systems come with 14 speakers. Like the Palisade, the Ascent comes standard with USB ports in the first and second rows. It only has four USB ports in comparison to the Palisade's five ports. The top half of the Ascent lineup has two more USB ports in the third row.

In this area, both SUVs do very well. Subaru has long been known for its commitment to safety, and Hyundai has pushed hard to integrate driver-assist technologies into its vehicles in recent years.

In every trim of the Subaru Ascent, there is a package called EyeSight Driver Assist Technology. This package has pre-collision braking to reduce the risk of a frontal collision, lane departure and sway warning, lane centering, and adaptive cruise control. There are also automatic high beams and a rear-vision camera. The top trim of the Ascent has an additional camera that provides a 180-degree perspective of what's in front of the vehicle. The top trims have reverse automatic braking to prevent certain types of low-speed accidents, and most trims have blind spot and rear cross-traffic monitoring.

The Palisade has many of those same features in every trim, such as forward collision alert, automatic high beams, adaptive cruise control, automatic emergency braking, lane following, and lane keeping assist. It has a driver attention alert that can warn people when it seems like they're not focused on the road. Most of its trims have rear cross-traffic and blind-spot collision-avoidance assist, and its top two trims have surround view monitors. This should be very helpful when parking, but just in case, there is also a parking distance warning function.

One other available feature that the Palisade has is a head-up display. This lets drivers know about things like the speed limit, warnings systems, and other information that would be important to keep track of. The information is displayed on the windshield, unobtrusively, right behind the steering wheel.

Vehicles of this size and capability aren't going to be super affordable, but these two models are still reasonably priced. The Ascent has a starting cost of $32,295, which is really close to the starting cost of the Palisade, which is $32,675. These two trims are comparable in many ways in terms of exterior and interior features.

The Palisade's SEL trim costs $35,325, and the Limited costs $45,275. This significant price increase is likely due to the trim's Nappa leather seats, heated and ventilated front seats, heated rear seats, larger touchscreen with navigation, surround view monitor and other advanced safety components, ambient lighting, sunroof, and hands-free smart liftgate. Plus, there's a Calligraphy trim that has even more refined elements than the Limited does. It costs $46,200.

The second-available trim of the Subaru Ascent is the Premium, and it's priced at $34,795. Like the SEL trim of the Palisade, it has more convenient amenities and higher quality components like heated front seats. The Premium trim of the Ascent costs $39,595, and the Touring is priced at $45,445. The Ascent Limited has fewer features than the Palisade Limited, but its more than $5,000 cheaper. The Touring is closer to what the top trims of the Palisade, but it doesn't have quite as many sophisticated features.

These are two great options for anyone in need of a three-row SUV. They have about the same amount of interior space, though the second-row of the Palisade is more spacious. The Palisade has several more high-tech elements as well, so it may be able to appeal to the consumer who really values innovation and likes everything to be modern.

On the other hand, the Subaru Ascent just feels like the more practical choice. On average, its trims are less expensive than those of the Palisade are, and its standard all-wheel drive and X-Mode contribute to its durability.

One model has many extra features that would come at an additional cost, and the other one is sure to be a reliable vehicle to drive on a daily basis. Customers just have to determine if the additional benefits of the Palisade are worth it to them.

Save Money on a 2021 Hyundai Palisade:
Are you Shopping for a New Vehicle? Find the Best Deals with "Free - No Hassle" Prices Quotes.