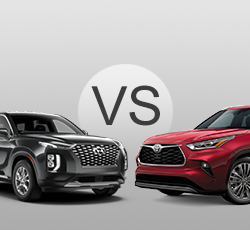 2021 Palisade vs Highlander - How do they stack up? Which is Better?

Three-row SUVs are appealing to many customers. They have the size that many people need, and they can be ideal for both regular commuting and for taking large households on long road trips to potentially rugged areas.

The Toyota Highlander and Hyundai Palisade are two of the highly sought-after three-row SUVs in today's market. The Palisade is a relative newcomer, while the Highlander has been around for awhile. Either one would be an excellent choice since they're both well equipped with advanced technology, comprehensive safety packages, and powerful engines. This guide should hopefully help potential buyers decide between the two.

With vehicles of this size, it's important that they run on reliable, high-quality engines. In the Hyundai Palisade, there's a fairly large V6 engine that has a displacement of 3.6 liters. This engine gives the Hyundai 291 horsepower and 262 pound-feet of torque. The Palisade is able to tow up to 5,000 pounds, so it can certainly handle some tough work.

In the Toyota Highlander, there's a comparable engine. It's a 3.5-liter V6 that has 295 horsepower and 263 pound-feet of torque, which is just about the same amount of capability as seen with the Palisade. Again, there's a towing capacity of 5,000 pounds with this model.

There is another choice for the Highlander, and it's a hybrid powertrain. It's not quite as strong, as it has a towing capacity of 3,500 pounds. Its 2.5-liter engine and electric motor give it a net horsepower of 243.

All-wheel drive is something that most SUVs offer. The Hyundai Palisade and Toyota Highlander both come standard with front-wheel drive, with all-wheel drive being an option.

When shopping for new vehicles, it can be nice to know that they come with warranties. This gives people peace of mind as they prepare to make big purchases. The Palisade's powertrain is covered for ten years or 100,000 miles, which is pretty generous considering that the Highlander's powertrain is covered by a warranty for only 60 months or 60,000 miles. The basic warranty on the Toyota is 36 months or 36,000 miles, and that of the Palisade is 60 months or 60,000 miles. There is a special warranty for the hybrid system, which is good for 96 months or 100,000 miles.

Both of these models have been designed with everyday drivers in mind. Even though they're on the larger side, they're relatively easy to handle. When parking, people just have to keep in mind that they're fairly long. The Palisade has a length of 196.1 inches, and the Highlander is about an inch shy of that mark. They both sit about eight inches off the ground, giving them the height needed to clear various obstacles and drive over bumpy terrain.

As mentioned at the beginning of this overview, these vehicles have three rows of seating. In either model, there could either be room for eight or seven. The eight-seat configuration would have a bench seat in the middle row and another bench in the third row. If someone chooses to get a pair of captain's chairs in the second row, then the cabin could feel more spacious but the number of seats would drop down to seven.

Since these models have a similar cabin arrangement, it's useful to specify the dimensions of each. In the Palisade, leg room in the front is up to 44.1 inches, and it's 42.4 inches in the second row. People in that area will have plenty of room to spread out. In the third row, though, there's only 31.4 inches of leg room.

Things are somewhat similar in the Highlander, as it has 42.0, 41.0, and 27.7 inches of leg room in the first, second, and third row, respectively. This cramped third-row space might make people think twice about the Highlander. However, it's perfectly suited for children, who may really love being in a row of their own.

Given how busy many people are these days, it can be important to have a vehicle with technology that allows them to stay in touch with others. Fortunately, Hyundai and Toyota have concentrated their efforts on building modern, high-tech vehicles.

Both the Palisade and Highlander come standard with an eight-inch touchscreen. The list of accompanying features includes Android Auto, Apple CarPlay, and Bluetooth. The Toyota Highlander's package might be slightly better, as it has Amazon Alexa and SiriusXM as well. SiriusXM is not offered with the base model of the Palisade, though it's part of the package on the higher trims.

Buyers with refined tastes will likely be looking at the higher trims of these models. On the Palisade, there could be a 10.25-inch touchscreen with integrated navigation and a Harman Kardon sound system, along with wireless charging and an in-vehicle intercom that makes it easier to communicate with passengers. On the higher trims of the Toyota, there could be an even larger touchscreen that measures 12.3 inches. The premium sound system has 11 JBL speakers, and there would be navigation, too. The Highlander has an available intercom system as well.

Wireless charging is available in the two models. This can make it so simple to keep a device charged when traveling since it eliminates the need to keep track of cables and cords.

Tire pressure monitoring, a full array of air bags, stability and traction control systems, and sturdy frames are some of the components of the Palisade and Highlander that can keep people safe. In addition, there are multiple driver-assist technologies in these SUVs that can actively work to prevent accidents.

The two models have pre-collision alert, pedestrian detection, and automatic emergency braking to reduce the chances of getting involved in frontal collisions. They also have the ability to warn drivers when they're veering out of their lanes, and they could even correct steering for drivers. Plus, they have adaptive cruise control, a system that adjusts steering if necessary to maintain a safe distance from other vehicles.

With the Hyundai Palisade, there is a Driver Attention Warning system that can sense when drivers aren't paying close enough attention to the road. Blind spot and rear cross-traffic alert are standard on the higher trims of the Palisade, as they are on the Highlander. A parking assist feature is part of the upgraded safety package on the Toyota Highlander. It can do what its name suggests; it can take control of steering when parking. While the Palisade has parking distance warning features, it doesn't have the "assist" capability. Another available feature found on only the Toyota Highlander is a Bird's Eye View camera that provides an all-around perspective of the SUV.

When deciding which SUV has the better value, it can be tricky. Neither one is particularly cheap by any standards, and both have an impressive number of amenities. The Hyundai Palisade's lineup starts with the SE trim, which costs $32,675. The SEL is a few thousand dollars more expensive, and for that additional cost, people can get a sunroof, roof rails, proximity key entry, and dual-zone climate control.

There's a fairly large jump up to the Limited, which costs $45,275. This is likely because it has much more advanced technology, in the from of a 12.3-inch digital instrument gauge, wireless charging, and a larger touchscreen with navigation. It also has things that people can appreciate but don't necessarily need, like leather upholstery, a heated steering wheel, customizable interior lighting, and heated and ventilated first- and second-row seats. The Calligraphy is even more expensive, priced at $46,200, and it has the most premium materials and exterior accents.

There are many trims of the Toyota Highlander. The lineup starts off with the L trim, which has a starting price of $34,910. This is already about two thousand dollars more expensive than the entry-level trim of the Palisade. As the Highlander moves up in trim, it goes without saying that the prices rise as well. The most expensive Toyota Highlander costs more than $50,000.

Hybrids are going to be more expensive than their non-hybrid counterparts. Hopefully, people can recoup that extra cost by saving money each month at the gas station. In the various trims, the upholstery ranges from fabric to leather, with SofTex synthetic leather being a third option. Seats in the front could be heated and ventilated, and the second row seats could be heated, too, though they can't be cooled like they can in the Palisade.

There are a few key things to keep in mind when deciding whether to get a 2021 Hyundai Palisade or a 2021 Toyota Highlander. Right off the bat, the Palisade can be eliminated from contention if a prospective customer wants a hybrid. Only Toyota offers this with its three-row SUV. Otherwise, the fuel economies and capabilities of the two models are quite similar.

That brings the discussion to the issue of size. The two SUVs are both sizable and sit high off the ground, but the Palisade has more overall cargo capacity and more third-row leg room.

In the areas of safety and technology, the Toyota Highlander has the advantage. It can come with a larger touchscreen than what's found on the Palisade, and it has a more impressive safety package, especially since it has an available 360-degree camera and available parking assist. While the Palisade isn't lacking anything important, it just doesn't have those same extra features.

When price is taken into consideration, the Hyundai Palisade will attract more attention than the Highlander. It's the more affordable model, both when looking at the lower trims and the higher trims. This, plus the fact that it has more interior space, will make it a more practical choice for many buyers. On the other hand, the Highlander has so many trims that people have plenty of opportunity to customize their new SUVs. If they want the best amenities, then the higher trims of the Highlander will definitely meet their expectations.

Save Money on a 2021 Hyundai Palisade:
Are you Shopping for a New Vehicle? Find the Best Deals with "Free - No Hassle" Prices Quotes.