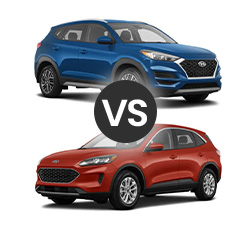 When a sedan is just a bit too small, the compact SUV market is the place many buyers turn. These vehicles have the extra cargo and passenger space that people are looking for without becoming difficult to maneuver or park. Due to their popularity, the small SUV market is flooded with options.

The Ford Escape is one such option that has been around for a long time. It launched a new generation in 2020 and addressed some of the issues drivers had with the SUV. This year, minor changes are made to the SUV. Examples include the hybrid powertrain becoming available on the SE and SEL trim levels, as well as a new wheel design for the Titanium trim level.

Hyundai's Tucson is an option that has gained popularity since making its debut. The SUV is going to be completely redesigned for 2022, meaning the 2021 Tucson sees almost no changes. In fact, the only difference this year involves the names of paint colors, with Gemstone Red being replaced by Red Crimson, Black Noir Pearl being replaced by Ash Black, and Sage Brown being replaced by Coliseum Gray.

Ford has built a reputation for building family-friendly vehicles, while Hyundai is known for offering great value. On the surface, these two SUV options may be hard to choose between. The following breakdown of the 2021 Hyundai Tucson and 2021 Ford Escape can help clear things up.

The first two trim levels on the 2021 Tucson ladder, known as the SE and the Value, get a 2.0L four-cylinder engine. They produce 161-horsepower and 150 lb-ft of torque. The remaining four trim levels use a 2.4L four-cylinder engine instead, resulting in them making up to 181-horsepower and 175 lb-ft of torque. Either way, buyers will be looking at a six-speed automatic and front-wheel drive. All-wheel drive is available on all trim levels.

In total, there are three engine options for the 2021 Escape. Most trims come standard with a turbo 1.5L three-cylinder that has them making 181-horsepower and 190 lb-ft of torque. This engine works with an eight-speed automatic transmission. Standard for the top-of-the-line Titanium trim, and optional for the SE and SEL, is a 2.5L hybrid setup. It has the ability to create 200-horsepower in total and pairs with a continuously variable transmission.

So which SUV wins the fuel economy war? The Hyundai Tucson gives up rather disappointing numbers in 2021, with the standard engine estimated to get 23mpg city and 28mpg highway. As for the more powerful engine, it is only estimated to give drivers 22mpg on the city but holds at 28mpg on the highway. Many rivals can do better.

On the other hand, the Ford Escape shines when it comes to fuel efficiency. The standard engine has the SUV seeing 28mpg in the city and 34mpg on the highway. With the turbocharged four-cylinder, the Escape gets 23mpg city and 31mpg on the highway, which is what the base engine of the Tucson can do. When the hybrid powertrain is underneath the hood, this SUV gets 44mpg city and 37mpg highway.

The 2021 Hyundai Tucson received a score of 3.5 out of five from J.D. Power when it comes to predicted reliability. Ford's 2021 Escape got 4.5 stars, something that may heavily sway buyers in its favor. The Escape Hybrid got 3.5 stars.

Most critics agree that the handling and comfort of the Tucson are hard to beat. Buyers who are after an engaging drive for themselves but also want a smooth experience for their passengers will love this SUV. The suspension is phenomenal, absorbing the majority of bumps in the road with ease. It is easy to maneuver as well.

The Ford Escape is also regarded highly when it comes to handling. It corners well and has no problem with the majority of road bumps. Many would agree that it is the more fun option between the 2021 Tucson and Escape.

Inside the Tucson, there are supportive front seats and great forward visibility. The back seats are not quite as comfortable and are best reserved for small children. In the Tucson's plus column is the fact that it is quiet in the cabin. On the downside, the rear pillars are too large and impact visibility when backing out or changing lanes.

The Ford Escape is a bit more generous in the backseat. Both rows are spacious and comfortable, even on longer journeys. The rear seats have the ability to slide forward and back, depending on whether the driver needs cargo or passenger space. Visibility is adequate in all directions.

The entry-level Tucson has a 7-inch touchscreen to run features like Android Auto, Apple CarPlay, and Bluetooth. A single USB port and a six-speaker audio system are also included. The available upgrades for the Tucson include an 8-inch touchscreen, navigation, wireless device charging, an eight-speaker audio system, and an extra USB port. Select models also have HD and satellite radio.

In comparison to the Tucson, the entry-level Escape is a little disappointing when it comes to tech features. It has only a 4.2-inch display, Bluetooth, a USB port, and a six-speaker stereo system going for it. From the second trim level up, the Escape goes up to an 8-inch touchscreen and adds smartphone integration. The drivers that choose this Ford SUV can also get a Wi-Fi hotspot, navigation, and a 10-speaker Bang & Olufsen sound system.

The Tucson's infotainment system was clearly designed with drivers in mind. Whether it is equipped with the 7-inch or 8-inch touchscreen, the high placement on the dashboard makes it easy to reach while driving. The touch controls respond quickly, and drivers always have the option of using the physical knobs if they prefer. Most critics are also fans of Ford's Sync 3 infotainment system, which is standard across the board in the 2021 Escape. The Escape also has physical controls for its infotainment and climate control features.

Both the Hyundai Tucson and Ford Escape are good choices for drivers concerned with safety scores. These SUVs both got five out of five stars from the National Highway Traffic Safety Administration when it came to their overall scores. They both also received five stars in frontal and side collision testing, along with four stars in rollover testing.

The Insurance Institute for Highway Safety also rated these two 2021 SUVS similarly. They got the top "Good" score in all of the six categories that the IIHS tested them in. When it came to headlights, the standard Tucson ones got a "Poor" while the LED options were "Good." The standard Escape headlights rated "Marginal", and the upgrades rated "Acceptable."

Drivers will find that the Tucson comes with a respectable list of driver aids, although it is not quite as impressive as some rivals. Standard on all models are things like lane departure warning, driver attention monitoring, forward automatic emergency braking, and lane keep assist. Blind-spot monitoring, adaptive cruise control, and a surround-view camera system are among the available options on higher trim levels.

As for the Escape, it has everything that the Tucson has standard, minus the driver attention monitoring. It also adds blind-spot monitoring, rear cross-traffic alert, and automatic high beams to its standard feature list. The Escape is available with a few features that cannot be had on the Tucson, including a head-up display and parallel and perpendicular park assist.

The 2021 Tucson and 2021 Escape clearly each have their own strengths and weaknesses. Drivers may have to make their decision based on value. The entry-level Tucson model starts out at $23,700, while the top Ultimate model will set buyers back $32,050. These are below-average numbers for the class. On the other hand, the Escape starts at $24,900, and its top trim will cost at least $36,400. These are slightly above average numbers.

Of course, the initial cost is just a part of the financial story. That is why Kelley Blue Book provides a five-year cost-to-own estimate for new vehicles. The 2021 Tucson should cost drivers around $18,663 out-of-pocket in its first five years. At the same time, its value will be reduced by approximately $14,236. That makes its five-year cost-to-own $32,899, or $0.44 per mile.

There are no official estimates for the 2021 Escape currently. Still, the 2020 model is similar enough to give buyers a good idea of what they will be facing. This vehicle's out-of-pocket expenses are estimated to be $18,681 and the depreciation hit will be about $17,440. This makes its total cost-to-own for five years $36,121, or $0.48 per mile. While these numbers are considered better than average, they are clearly not as good as what the Tucson has to offer.

It is worth noting that the Escape has lower fuel costs. Due to its shorter warranty, however, it is expected to cost buyers more of their own money in repairs than the Hyundai SUV. The Escape also loses value much quicker than the Tucson.

When deciding which is the better value, drivers cannot ignore the amount of technology that the Tucson comes standard with. Buyers can get this SUV for two grand less and enjoy smartphone integration, something they would not get in the entry-level Escape. On the other hand, the Escape comes standard with the popular blind-spot monitoring feature. Still, this is not enough to justify the extra expense when the standard tech features of the Escape are so underwhelming.

The 2021 Ford Escape is a fine SUV. Its predicted reliability is impressive, and its fuel economy is certainly appealing. That said, the Hyundai Tucson is the better choice for those looking for value. This is due not only to its lower purchase price and cost to own, but also its impressive warranty. If blind-spot monitoring is a deal-breaker, buyers only have to step up to the second Tucson trim level to find it.