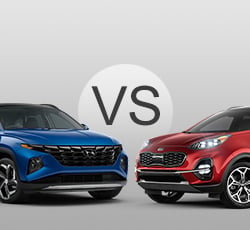 2021 Tucson vs Sportage - How do they stack up? Which is Better?

There's a large group of customers in the market looking for affordable and practical SUVs that aren't too big or bulky. The Hyundai Tucson and Kia Sportage both fit this description perfectly. Hyundai and Kia are very similar brands; in fact, Hyundai owns a share of Kia Motors. Taking this into consideration, it makes sense that these two SUVs are popular amongst people who want compact SUVs with excellent value.

In this guide, the two models will be matched up in various areas. This should hopefully give prospective customers a better sense of which model would be best for them.

In the Tucson, there could either be a 2.0-liter inline four-cylinder engine or a slightly larger engine of the same type with a displacement of 2.4 liters. The 2.0-liter engine provides the SUV with 161 horsepower and 150 pound-feet of torque. Those numbers get a pretty significant boost, up to 181 and 175, respectively, when the larger engine is running the show.

There's a similar story with the Sportage, in a few ways. The Kia has two options as well, and the first choice is actually the same exact engine that's found in the higher trims of the Tucson. That's right, the lower trims of the Sportage have 2.4-liter engines with the same amount of horsepower and torque as the more premium Tucsons. The SX Turbo trim of the Sportage benefits from having a 240-horsepower 2.0-liter turbo engine that has 260 pound-feet of torque.

With both models, there's a six-speed automatic transmission. In addition, both models can have front-wheel or all-wheel drive. If anyone has plans to tow cargo, these SUVs can handle a moderate amount of weight. The Kia Sportage can tow up to 2,000 pounds, as can the Hyundai Tucson with the 2.4-liter engine. With the smaller engine, the Tucson can tow up to 1,500 pounds.

The Tucson and Sportage are both easy to handle. Their smaller engines aren't too loud, and that's a good thing since there aren'r really any special noise-cancelling features in these SUVs. All of the available engines aren't going to blow anyone away in terms of how fast or responsive they are, but they'll get their jobs done without an issue.

What is great about these models is their versatility. They have 60/40 split rear seats, giving people the option of lowering only one side or folding down the entire row. In the Tucson, the rear cargo area has a volume of 31 cubic feet, and cargo capacity can be expanded to almost 62 cubic feet when the rear seats are folded down.

The relatively open cabins make it easy for drivers to see all around their vehicles. The large window in the back gives people a wide range of vision when they're backing up.

Of course, it's important to go over the technology packages that each of these vehicles features. In the Tucson, the standard touchscreen measures seven inches. It comes along with Android Auto, Apple CarPlay, a six-speaker sound system, Bluetooth, and steering-wheel-mounted controls. Moving a trim up from the entry-level SE gives the Tucson the addition of SiriusXM, HD Radio, and the Blue Link Connected Car System. This last component gives people the ability to use their smartphones to remotely start their engines, unlock or lock their doors, and check on vehicle diagnostics. On higher trims, there are eight-inch touchscreens with navigation, wireless charging, and Infinity Audio sound systems.

With the Sportage, every trim has an eight-inch touchscreen, so this is an advantage over the Hyundai Tucson. The Sportage's base package comes with Apple CarPlay, Android Auto, Bluetooth, and Siri Eyes Free, which lets people use voice commands. SiriusXM is only an option on the mid-level trims. It is standard on the highest trim, though, as is a navigation program. On the highest trim, there's a Harman Kardon premium sound system that rivals what the Tucson offers.

When looking at these vehicles from a safety standpoint, there are many similarities, as both have many advanced features.

That being said, the Sportage may offer slightly more than the Tucson does. For instance, it comes standard with pedestrian detection, a feature that's only available on the mid-level and higher trims of the Tucson. Also, the Sportage's base model has available blind spot and rear cross traffic monitoring. These are not available on the entry-level trim of the Hyundai Tucson.

Smart cruise control, a system in which a vehicle can adjust its speed to stay a safe distance from other vehicles, is only a part of the highest trim of the Tucson. In contrast, it's available on the mid-level trims of the Sportage and standard on the highest trim.

Most of the other features are the same when comparing the two models. They have vehicle stability control, anti-lock brakes, multiple air bags, and three-point seat belts in every position.

There is one other notable difference, though. Only the Kia Sportage has Hill Start Assist Control. When the vehicle is stopped on a hill and the driver presses down hard on the brakes for about a second, the brakes will be held for a few seconds when pressure is taken off the brake pedal. This prevents the Kia from rolling backwards. It can come in handy when someone is at a stop sign or stop light and needs some time to transfer pressure to the gas pedal.

When comparing these vehicles to other SUVs, it's evident that these two models are offered for affordable prices. The Hyundai Tucson starts out at $23,700 and goes up to $32,050. The base model of the Kia Sportage has a starting price of $24,090, and it tops off at $33,750. Just looking at these numbers, the Sportage does seem to require a bigger investment. However, these prices are all so similar that a difference of less than a thousand dollars might not be very significant to someone who's preparing to make a big purchase.

It will be useful to go over the various trims that are available with each model. The Kia Sportage has four trims, which are the LX, S, EX, and SX Turbo. The LX has some notable features, like an eight-inch touchscreen, LED Daytime Running Lights, 17-inch wheels, remote entry, and cloth seats. The S is priced at $26,590, and it comes with several upgrades, such as metal-look skid plates, heated side mirrors with LED turn signals, fog lights, and 18-inch wheels. In the cabin of the S, there are seats covered in a Sofino synthetic leather, and the steering wheel is wrapped in leather.

The top two Sportage trims are the EX ($27,390) and SX Turbo ($33,750). They have power liftgates, smart key entry, dual-zone climate control, heated front seats, and power-adjustable driver's seats. The SX Turbo takes performance to a different level with its more advanced engine, and it treats people to ventilation in the front seats, leather upholstery, a heated steering wheel, a panoramic sunroof, sporty accents, and parking assist.

The lineup of the Hyundai Tucson is a bit more varied. As mentioned earlier, this model starts out at $23,700. That price is for the entry-level SE trim, which has a seven-inch touchscreen with smartphone compatibility, numerous driver-assist mechanisms, and cloth seats. The Value is the next available trim, and it's offered for $25,150. It has a power-adjustable driver's seat, heated front seats, smart entry (also called Proximity Key entry), and LED exterior accents.

In the middle of the collection are the SEL and Sport. At the SEL level, there is dual-zone automatic climate control as well as second-row vents. This trim is priced at $26,100, about one thousands more than the Value, primarily because it has the larger engine. The Sport looks more athletic, with fog lights, LED headlights, and LED Daytime Running Lights.

Both the Limited and Ultimate shine with their chrome exterior door handles and window trim moldings. Note that the Ultimate has a panoramic sunroof. Inside their cabins, there are leather seats and heated steering wheels that add to their upscale feel. The Ultimate really takes care of people, as it has heated rear seats and ventilation in the front seats. Taking everything into account, it's reasonable that the Limited costs $29,400 and the Ultimate costs $32,050.

It can be hard to compare the 2021 Hyundai Tucson and 2021 Kia Sportage because they are so similar. They basically have the same frame and identical dimensions. They even share an available engine. However, this brings up the point that the Sportage has the turbo engine as its second option while the Tucson starts out with a relatively small engine. For those who value performance, the Sportage definitely wins.

From a financial perspective, there's nothing that sets the two models too far apart from each other. Some people may appreciate that the Tucson has more available trims, giving them more opportunity to pinpoint on an exact package that speaks to them. While it was mentioned that a one-thousand dollar difference isn't really a huge difference, it's still a difference. Budget-conscious drivers can't help but notice this discrepancy, which helps the Tucson.

Finally, there's the question of which SUV has better amenities. Yes, the Sportage has a larger touchscreen and a few more standard driver-assist technologies than the Tucson does, but the Tucson is nicely appointed as well. The Value trim, in particular, has great benefits like heated front seats and a power-operated driver's seat.

In the end, the Sportage will likely win over customers who want an extra edge in performance. On the other hand, the Tucson may appeal more to drivers who simply want something that's practical. There are many people who will do whatever they can to save a few bucks, and if that's the case, then the Tucson should come out of the head-to-head matchup as the winner. If people can spare some money, though, the Sportage would be the more exciting choice.

Save Money on a 2021 Hyundai Tucson:
Are you Shopping for a New Vehicle? Find the Best Deals with "Free - No Hassle" Prices Quotes.