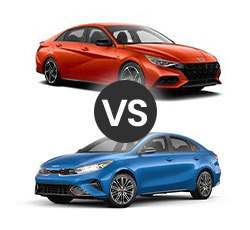 Lately, the automotive world seems to be flooded by large trucks and SUVs. For some drivers, however, a compact sedan remains the most logical choice. Not only are they easy to drive, but they are also typically very affordable. That is certainly true of the 2022 Hyundai Elantra and the 2022 Kia Forte.

Kia and Hyundai are very similar. This is partially due to the fact that Hyundai actually owns Kia, although these two companies continue to operate independently. While these two sedans have some striking similarities, they also have differences that need to be noted. The following guide will help consumers make an informed choice between the two.

The base engine for the Elantra in 2022 is a 147-horsepower 2.0L four-cylinder. It is mated to continuously variable transmission and front-wheel drive. That is just the tip of the iceberg for the Elantra, however. Buyers can choose a model with a hybrid powertrain, which is based on a 1.6L four-cylinder engine and creates a total of 139-horsepower. It pairs with a six-speed automatic transmission.

If power is more important than efficiency, drivers can choose the N-Line trim level. It has a turbocharged 1.6L four-cylinder that produces 201-horsepower. It can pair with either a six-speed manual transmission or a seven-speed dual-clutch transmission. The most powerful version of the 2022 Elantra is the N, which has a 2.0L four-cylinder that generates 276-horsepower. It pairs with either a six-speed manual or a dual-clutch eight-speed automatic.

So how does the 2022 Forte compare when it comes to power? The standard engine is also a 2.0L four-cylinder that creates 147-horsepower, just like the Elantra. There is currently no hybrid version of the Forte, although that appears to be something coming in the next few years.

If buyers want a more powerful version of this Kia sedan, they can choose the GT trim. It has the same 201-horsepower engine that the Elantra uses in its N-Line trim level. Just like the Elantra, the Forte can mate that engine with a six-speed manual or a dual-clutch seven-speed automatic transmission.

Both of these compact sedans give drivers a 10-year or 100,000-mile powertrain warranty and a five-year 60,000-mile limited warranty. The Forte does have a better reliability score, however. It received a score of 87 out of 100, while the Elantra received 80 out of 100.

The Hyundai Elantra, with its standard or hybrid engine, is pleasant to drive. Responsive steering and a tight turning radius make it easy to maneuver this sedan around town. The N-Line model is downright sporty to drive, thanks to its sophisticated rear suspension and bigger brakes. The Elantra N has even larger front brakes, plus adaptive shock absorbers, making it exhilarating to get behind the wheel.

As for the Forte, it has a perfectly acceptable ride. It does a respectable job of absorbing the bumps in the road, and the brakes provide reassuring stopping power. Some drivers find that the steering is a bit vague, however, which takes away from the joy of driving it.

When it comes to trunk space, the 2022 Elantra has 14.2 cubic feet. This is considered average for a compact sedan. The Forte, on the other hand, has 15.3 cubic feet, which is one of the roomiest trunks in the class.

Perhaps more important is the amount of space that these vehicles offer to passengers. The Forte has plenty of head and legroom in both rows. Although there are technically enough seats for five, no more than four adults would want to ride in the Forte for any extended period.

The Elantra also can technically seat five but is better off sticking to four. The seats are comfortable and supportive, but the backseats are a bit more cramped in this sedan. The Elantra also has a fastback roof, meaning that it slopes dramatically. Not only does that reduce the amount of headroom in the back, but it also makes it a bit difficult to see out of the rear. Forward visibility is not an issue for either sedan.

As for the infotainment setups, the 2022 Forte and Elantra are very similar. They both have an 8-inch touchscreen standard, and they both have wireless versions of Android Auto and Apple CarPlay. Both of the entry-level models are also equipped with a four-speaker sound system.

Upper trim levels of the Forte and Elantra have a 10.25-inch touchscreen but go with wired versions of the smartphone integration tools. Similarly, both can be upgraded to sound systems with either six or eight speakers. HD radio, satellite radio, and wireless device charging are also available on both the Elantra and the Forte.

The entry-level models of the Elantra and Forte are relatively bare-bones when it comes to comfort and convenience features. They both have durable cloth upholstery and manually-adjustable climate controls. The Elantra SEL and Forte GT-Line have extras such as dual-zone automatic climate control and push-button start. While no version of the Forte has genuine leather upholstery, this is a feature that can be found on the Elantra Limited.

When comparing safety scores, the 2022 Elantra is preferable over the 2022 Forte. It received a score of five out of five stars overall from the National Highway Traffic Safety Administration. The score is broken down to five stars for side crash and rollover tests, and four stars for the frontal collision test.

The Forte received an overall score of four out of five stars. While it did get five stars for side crash testing, it received only four stars for both frontal collisions and rollover testing. The NHTSA also wants buyers to know that the Forte has a potential issue where the left rear door may strike a rear passenger in a side crash.

When it comes to driver assistance features, both the 2022 Elantra and Forte have a solid list of standard equipment. They come with forward-collision warning, pedestrian detection, lane departure warning, lane-keeping assist, and forward automatic emergency braking. Both also have a driver attention monitor.

While that concludes the list of standard safety features for the Forte, the Elantra keeps going. It comes with blind-spot monitoring, rear cross-traffic alert, automatic high beams, and a rear-seat alert. The Elantra also has the safe exit warning feature.

Automatic high beams, safe exit assist, rear cross-traffic alert, and blind-spot monitoring are all available on select Forte models. Both offer cyclist detection, rear parking sensors, and adaptive cruise control on upper trims. Highway drive assist, a feature that uses cruise control and radar to keep the vehicle in the center of the lane and prevents speeding, is also available on the Elantra and Forte.

Between the two, the Forte is slightly more affordable than the Elantra. It has a base price of $19,090, which is lower than most of its competitors. The base model of the Elantra starts out at $19,850. Despite being more expensive than the Forte, the Elantra is still one of the cheapest new compact sedans buyers can buy.

Buyers will also need to consider what they are getting for these prices. Despite being more expensive, the Elantra comes standard with important extra safety features, including blind-spot monitoring and automatic high beams. These features more than justify the higher price.

If buyers are more interested in the performance-oriented versions of these sedans, the Forte is more affordable again. The Forte GT has a starting price of $23,490, while the Elantra N-Line starts out at $24,250. These vehicles make the same amount of horsepower, but the N-Line will be easier on the wallet at the gas pumps.

This leads to the next step, which is to take a look at the projected costs to own each of these vehicles over the course of five years. To make things simple, the following comparison will use the entry-level Elantra SE and the entry-level Forte FE. The numbers are assuming that these vehicles are driven around 15,000 miles a year.

Despite having the same base engine, the Elantra is more fuel-efficient. As a result, it will cost around $8,600 in fuel over the course of five years. At the same time, the Forte will cost around $9,100. That makes the Forte about $100 more expensive to drive each year.

On the other hand, the Forte holds its value better. It will lose $7,750 of its value over the course of five years. As for the Elantra, it will lose $8,100. This may not make a difference on a day-to-day basis, but it could be a factor when it is time to trade in or sell the sedan.

Minor repairs will likely need to be made to either the Elantra or the Forte. Both are estimated to cost a bit over $500 for these repairs. When it comes to the routine maintenance these sedans need, however, the Elantra wins. It has an estimated maintenance cost of $2,500, while the Forte maintenance will cost around $3,200.

It is easy to see why buyers are interested in both the 2022 Kia Forte and the 2022 Hyundai Elantra. These vehicles are efficient and very well-equipped, especially considering their low price tags. The number of standard technology features is also enticing.

When looking at the Elantra, it has better safety scores from the NHTSA. It is also offered as a hybrid as well as with a heart-pounding 276-horsepower engine. It is also the more efficient of the two, which will save drivers money over the years. The lower projected maintenance costs are also nice.

As for the Forte, it has a smaller initial price tag. It will also hold onto its value better than the Elantra. The cabin of the Forte is also larger, as well as the trunk, which makes the Forte a possible option for smaller families.

Either the 2022 Hyundai Elantra or the 2022 Kia Forte will make a good choice for anyone after an affordable sedan. If having more space is the priority, go with the Forte. If having a more engaging drive is more important, go with the Elantra.