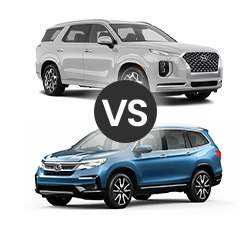 The Hyundai Palisade is a relative newcomer to the market, while the Honda Pilot has been around for some time. Both of these SUVs offer three rows of seating and great capability, and these are main reasons why they've had a lot of success.

This year, Honda has tweaked the lineup of the Pilot. It has taken the a few trims off the list of options; these trims happen to have been the most affordable trims available in recent years. As a result, the new version of the Pilot now has more standard features, but it also has a more expensive starting price than it did previously. It's entry-level trim is almost $5,000 more expensive than that of the Pilot.

Customers have many choices in terms of trim. There are seven option for the Pilot and four trims of the Palisade. All models are pretty impressive when it comes to technology and safety, so it may be a little difficult to determine which model would be more ideal. This overview will go over how each SUV might be different than the other.

Both models run on V6 engines. The Palisade's engine is a bit larger than the Pilot's is, and it has slightly more power than the Pilot does. Under the hood of a Hyundai Palisade, there's a 3.8-liter V6 engine. It can make 291 horsepower and 262 pound-feet of torque. In comparison, the Pilot runs on a 3.5-liter V6 that can deliver 280 horsepower. It actually makes the same amount of torque that the Palisade's engine does.

The Hyundai also has a mode that's more eco-friendly. It's the Eco mode that's part of the Drive Mode Select program. The other available modes are Comfort and Sport. Note that the Palisades with all-wheel drive come with Snow mode, and they can be locked in AWD mode.

Considering their size and strength, it makes sense that these SUVs can tow fairly heavy loads. If the Pilot is set up with front-wheel drive, it can tow up to 3,500 pounds. Having all-wheel drive results in an increased towing capacity of 5,000 pounds. This matches the maximum towing capacity of the Palisade. The Palisade, though, does have an additional safety system that can help with towing. It's called Trailer Sway Control, and it can work to ensure that drivers can stay in control when pulling cargo with them.

The two vehicles both ave hill start assist, and this can keep them from rolling backwards after begin stopped on a slope. The program does so by holding pressure on the brakes until the pressure has been applied by the driver on the gas pedal. In addition, the Palisade has downhill brake control so that it doesn't pick up too much speed coming down from the mountains.

One thing that helps the Pilot stand out on a test drive is its relatively quiet cabin. It has active noise cancellation, so it feels pretty peaceful. The Palisade's cabin feels somewhat quiet as well.

People who haven't had much experience driving vehicles of this size will have to get used to them, especially when parking. That being said, these SUVs aren't as big as some of the extremely large ones, so they should be easily maneuvered. The Pilot has a length of 196.5 inches. It has a ground clearance of 7.3 inches, which actually isn't that high.

The Palisade sits a bit higher off the road, having a ground clearance of 7.9 inches. It has just about the same length as the Honda does, measuring 196.1 inches. The Palisade is just slightly narrower and shorter than the Pilot is, but most people won't even notice this discrepancy.

It makes sense that these SUVs have just about the same amount of passenger room. In either model, the first-row and second-row passengers will have plenty of space to stretch out their legs. The Pilot has 40.9 and 38.4 inches of first- and second-row leg room, respectively. People in the first two rows of the Palisade will have a bit more space, with there being 44.1 and 42.4 inches of leg room in those areas.

It's a different situation when sitting in the third row. The Palisade has 31.4 inches of third-row leg room, and the Pilot has 31.9 inches of leg room for its passenger sitting in the back. These aren't generous amounts, and they may make this row uncomfortable for taller riders.

Some adults might have a hard time getting back there in the first place. What can help is having a pair of captain's chairs in the middle row, instead of a bench seat. This configuration really opens up the center of the cabin. The second-row bench seat provides an additional seat, though, so customers will have to think carefully about which configuration they prefer more. It is convenient that both the Palisade and the Pilot has second rows that can easily be slid or tilted forward to provide access to the back row.

Modern customers are looking for vehicles that have great technology packages, and the Palisade and Pilot certainly have this. The Palisade comes standard with an eight-inch touchscreen, and its higher trims have 10.25-inch touchscreens with navigation. The larger touchscreens also comes along with a 12-speaker Harman Kardon sound system, and all infotainment systems have Android Auto, Apple CarPlay, and Bluetooth.

In the Honda, there's an eight-inch touchscreen. This is the only option. It comes with Bluetooth and smartphone compatibility, and it's been equipped with SiriusXM. Higher trims have standard navigation and a traffic program that can assist people as they figure out the quickest routes to their destinations. The standard sound system has seven speakers, but higher trims have premium systems with ten total speakers.

One impressive aspect about the Palisade is how many USB ports are available. The first few trims have three USB ports in their first rows and two more in their second rows. Higher trims have another pair of USB ports for third-row passengers, and they have wireless charging, too.

The cabins of these vehicles can be busy, loud places if they're loaded down with passengers. An intercom system can make it easier for the driver to communicate with passengers. Both of these models have that kind of system. They also offer rear passengers the opportunity to turn the volume in their areas down. This way, people up front can listen to a radio station or podcast while those in the back find another way to stay entertained.

Speaking of entertainment, it's important to discuss the fact the Pilot can be set up with a cool feature that passengers will love. It's an advanced rear entertainment system that comes with two 10.2-inch high-resolution screens. It has a BluRay player and offers a pair of wireless headphones, and the screens can be used with certain apps.

To keep things convenient and to keep people comfortable, these Hyundai and Honda SUVs have several other features. The Palisade has second- and third-row air vents and dual-zone climate control and it can have a heated steering whee and heated and ventilated first- and second-row seats. The driver's seat can offer lumbar control, and it can have a leg cushion extension.

With the Pilot, a tri-zone climate system is standard. The steering wheel can be heated, and the seats in the first two rows can be seated. The front seats can be ventilated, too, but the second-row seats don't have that available feature. Power-lumbar support is offered on the Pilot, but its driver's seat doesn't have the option of coming with a leg cushion extension.

These two SUVs are decked out with all kinds of driver-assist technologies. They come standard with blind spot monitoring, rear cross-traffic alert, and automatic high beams. They have the ability to sense frontal collisions, and if an issue is detected, they can warn drivers and hit the brakes. They have a similar ability to sense when they're veering out of the center of a lane, and they can correct steering if necessary.

On top of this, the Palisade and Pilot have adaptive cruise control. This can come in handy on long stretches of highway, as the program keeps the vehicle ready to make adjustments to speed. If the leading vehicle slows down, these SUVs would slow down appropriately in order to maintain safe distancing.

While the Pilot is solid in this regard, the Palisade does even better. It comes standard with a parking distance warning function that works when the vehicle is in reverse, and it has a driver attention warning system. Further, it has safe exist assist, an available semi-autonomous driving program called highway driving assist, an available heads-up display, and an available surround view monitor. These last two programs provide the driver with useful information, and it can be nice to be more fully informed when one is behind the wheel.

It's hard for most people to ignore price when they're shopping for a new vehicle, and since the Palisade is so nicely equipped with refined materials and advanced technology, it seems like it has the better value.

These models are very comparable in key areas. In most ways, though, the Palisade has the slight edge. It has a little more capability, a more comprehensive technology package, and more advanced safety components. Importantly, it's also cheaper than the Pilot is.

Some people may prefer the Pilot over the Palisade because of brand loyalty or its slightly bigger third row of seats. Plus, it has the available rear-seat entertainment system that might work well for some households.