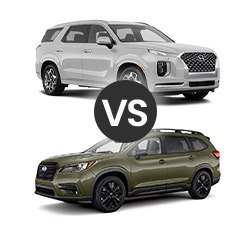 2022 Palisade vs Ascent - How Do They Stack Up? Which is Better?

The Palisade and Ascent, both three-row SUVs, are relatively new to the market. Hyundai debuted the Palisade in 2020, and Subaru first released the Ascent in 2018. Over the past few years, these models have done very well. There's clearly a demand for three-row SUVs, and these vehicles have been able to stand out because of their capability, size, practicality, and modern amenities.

Overall, the Palisade and Ascent seem fairly similar, so they should be able to attract the same type of buyer. To help prospective customers, this overview will review how what these SUVs have in common and, more importantly, how they are distinct from each other.

All five Ascent trims run on the same type of engine. It's a 2.4-liter version that has four cylinders and a turbocharger. The engine is capable of making 260 horsepower and 277 pound-feet of torque, which is a solid amount. It's paired with a Lineartronic continuously variable transmission that comes with an eight-speed manual mode and paddle shifters, in case a driver wants to exercise more control.

As many people may already know, the Ascent comes standard with symmetrical all-wheel drive, just like most of the other vehicles in the company's lineup. This all-wheel-drive system provides excellent traction, as it can adjust power delivery when the roads or trails are difficult to grip. If things are especially challenging, a driver can engage the Ascent's X-MODE function. X-MODE enhances traction even more. Further, there are traction control and active torque vectoring programs that are always working to improve performance.

The entry-level Ascent has a towing capacity of 2,000 pounds. All of the others in the lineup, when properly equipped, can haul up to 5,000 pounds. This gives people much more flexibility in terms of what they bring with them on their trips. Trailer Stability Assist is standard, too. It's able to sense when the trailer seems unstable, and if so, it can apply braking pressure to specific wheels in order to get things under control again.

Hill Descent Control is another included component on every Ascent. It can be useful when the SUV is making its way down steep hills. In this case, it's very easy to pick up unwanted speed, and this program can limit acceleration and make it so that the driver doesn't have to ride the brakes so much.

Instead of going with a turbocharged engine, Hyundai decided to give the Palisade a V6. It has a displacement of 3.8 liters, and with its size, it can do quite a bit of work. It delivers 291 horsepower and 262 pound-feet of torque, so it has the slight advantage over the Ascent's engine. This V6 is matched with an eight-speed automatic transmission with SHIFTRONIC, which provides an option for manual shifting.

All-wheel drive is optional on the Hyundai Palisade. If it's not selected, then the vehicle would have front-wheel drive. With all-wheel drive, the Palisade would also have Snow mode and AWD Lock so that it can do better in rough conditions.

Like the Ascent, the Hyundai has Downhill Brake Control to limit its speed, but this is only found on all-wheel-drive Palisades. Regardless of drivetrain, the Palisade has Hillstart Assist Control, a program that can hold pressure on the brakes while the driver gets ready to move forward. In addition, the Hyundai SUV has Trailer Sway Control. Towing capacity is 5,000 pounds, matching what the Ascent is capable of.

The Palisade has one more function that some people may appreciate. It's called Drive Mode Select. With the turn of a knob, a driver can select the appropriate mode. Comfort is the default option, and the other choices are Eco, Sport, and Smart. Eco focuses on enhancing efficiency, while Sport makes the vehicle feel more aggressive. In Smart mode, the vehicle pays attention to driving patterns and then can adjust gear shift intervals based on the driver's tendencies.

It may take some time to get used to the size of these vehicles. They are sturdy and durable, and they're on the larger side of the spectrum. The Palisade is 196.1 inches long and fairly tall. The Ascent is a touch longer, measuring 196.8 inches. It's not quite as wide as the Palisade is, but it's slightly taller.

Plus, the Ascent rides higher off the ground than the Palisade does. The Subaru has a ground clearance of 8.7 inches, and the Hyundai sits 7.9 inches off the ground. This small difference might be noticeable when driving through uneven terrain where there may be ruts or other obstacles that need to be cleared, or when people with limited mobility are trying to get in and out of the cabin.

Both vehicles have a total seating capacity of eight. The standard seating arrangement consists of two front seats, a bench seat in the middle row, and another bench seat in the back. Each of those bench seats can fit three people.

There is an alternative configuration that's used for the more premium trims in each lineup. Instead of the middle-row bench seat, select models of the Palisade and Ascent have a pair of captain's chairs. This provides more room for passengers to move around or spread out.

Out of the five available Ascent trims, two have options for either eight- or seven-passenger seating. The base trim is only offered as an eight-seat vehicle, and there are two trims that are exclusively available with seven seats. Three out of the four Palisade trims come standard with captain's chairs, with one of those trims having an optional second-row bench seat.

To make it easier to reposition seats, the companies have given these vehicles available power-adjustable driver's seats and front-passenger's seats. The Palisade can come with power-folding/unfolding third-row seatbacks as well. Its second row can be upgraded to have a button that can be pushed so that the seats can slide forward. This would make it easier to access the back row.

Cargo space is something that these models have a lot of. The Palisade has 18 cubic feet behind its third row of seats and a maximum cargo capacity of 86.4 cubic feet when the second and third rows have been folded down. An available hands-free liftgate is nice to have when someone is loaded down with bags or other items.

In the Ascent, the area behind the seats has a volume of 17.8 cubic feet. Total cargo capacity in this model is 86.5 cubic feet, so it's nearly identical to the Palisade in terms of interior space. The Ascent can come with a power rear gate, but it doesn't have a hands-free option.

Technology is impressive in the Palisade and Ascent. The first two trims of the Palisade have eight-inch touchscreens, and the top two trims have 10.25-inch touchscreens. Across the lineup, there are several standard components, including Android Auto, Apple CarPlay, Bluetooth, and five USB ports. The top two trims get to have integrated navigation, two additional USB ports in the third row, wireless charging, and 12-speaker Harman Kardon sound systems.

Subaru has put in four USB ports in its first few Ascent trims. The higher ones benefit from having an additional pair of USB ports that third-row passengers can use. Like Hyundai, Subaru uses Harman Kardon sound equipment, and the top Ascent trim has an audio system that consists of 14 Harman Kardon speakers.

There are two different sizes of touchscreen for the Ascent. The first is a 6.5-inch touchscreen that's found on the entry-level trim. It comes with SiriusXM, HD Radio, Bluetooth, Apple CarPlay, and Android Auto. The other trims have eight-inch touchscreens, with the most premium trim being set up with integrated navigation.

Since a crowded cabin can be a noisy place, the Palisade has an additional feature that some people might like to take advantage of. It's an in-cabin intercom that projects the driver's voice through the rear speakers so that passengers can hear him/her more clearly.

These vehicles provide peace of mind since they can warn drivers about problems and can take action to help prevent accidents. They come standard with automatic emergency braking and frontal collision warning, and they have lane keep assist and adaptive cruise control.

Almost all of the Ascents have blind-spot monitoring and rear cross-traffic alert, and some have rear automatic braking. One trim has a 180-degree front view monitor in addition to the standard rear-view monitor.

At one point, Subaru seemed to be ahead of the game with all of its advanced safety mechanisms. Subarus are still known to be safe and reliable, but the rest of the industry has worked hard in this area as well. Hyundai is a company that's been making great strides and has been able to equip its vehicles with many impressive components.

First of all, the Palisade comes standard with blind-spot and rear cross-traffic collision-avoidance assist programs. It further has a driver attention warning program and a feature that lets people know when they can safely exit the vehicle after parallel parking. It has a rear occupant alert system, which can hopefully prevent an incident from occurring in which a pet or small child is left alone in the back seat. Higher Palisade trims have a more advanced form of adaptive cruise control called Highway Driving Assist, and they can have surround view monitors and heads-up displays.

The Palisade starts out at $33,600. The next trim is reasonably priced with a cost under $36,000. Next in the lineup are the Limited and Calligraphy, which cost $45,840 and $47,290. These two trims are decked out with all kinds of high-end items, such as dual panel sunroofs, premium Nappa leather seats, and a memory system for the driver's seat and side mirrors, so their high prices seem to be justified.

The Ascent has a base price of $32,795, but that's with all-wheel drive already factored in. Mid-level trims are priced between $35,000 and $40,000, and the Touring is the most expensive option with a price of $45,945. For this price, a customer would get a panoramic moonroof, leather upholstery, and navigation.

With a more affordable price tag, the Ascent may seem more attractive. It does have a solid engine and a nice technology package, but the Palisade feels like more of a luxurious model. Hyundai included a few elements on the Palisade that aren't available on the Ascent, and some buyers will definitely notice this.

These vehicles are very comparable in terms of capability and size. When deciding on a vehicle to purchase or lease, though, the little things really matter. For this reason, the Hyundai Palisade may seem more like more of a treat. It can appeal to more sophisticated buyers with all of its interior upgrades and extra high-tech components.

On the other hand, the Subaru Ascent feels like more of a practical vehicle. People won't have to pay extra for all-wheel drive, and the price of the Ascent is a little lower than that of the Palisade. The Ascent can navigate its way through a variety of terrain, and it has plenty of room for people and cargo.