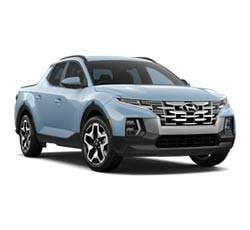 Compare the 2022 Hyundai Santa Cruz Trims - SE vs SEL, SEL Premium and Limited. What is the difference between them?

The Santa Cruz is a brand new model for 2022. It has an interesting look, with a front that resembles an SUV and a back end that's similar to the bed of a pickup truck. The Sant Cruz is easy to handle and not too big, so it should appeal to those who like having vehicles that are versatile but not cumbersome. Hyundai calls the Santa Cruz a Sport Adventure Vehicle, but most people would consider it to be a compact pickup truck. It comes with a comfortable cabin and plenty of convenient features, along with a competitive starting price.

There are four trims of the 2022 Hyundai Santa Cruz. Fortunately, they all have driver-assist technologies and touchscreens with smartphone compatibility. This is kind of becoming a hallmark of Hyundai vehicles. The company is continuing to do a great job of delivering quality to its consumers, and the Santa Cruz is a fresh take on what it means to be practical.

Compare the SE vs SEL Trims. What is the difference?

These trims run on the same type of engine, which is a 2.5-liter version with four cylinders. It's able to generate 191 horsepower and 181 pound-feet of torque. This is a decent amount of capability that should please most drivers. Hyundai has given the SE and SEL front-wheel drive, though all-wheel drive is optional on both trims. It may be a good idea to get all-wheel drive if anyone predicts having to occasionally deal with snowy, icy, muddy, or otherwise slippery conditions.

One advantage of having an SEL trim is that it has a proximity key entry system. With this program, the vehicle can sense the presence of the key fob. When it's within a few feet of the truck, the driver just needs to touch the door handle to unlock it. In addition, there's push-button start. With the SE, someone would need to physically press the unlock button on the key fob to enter the cabin, and the key would have to be put in the ignition to start the engine.

On the exterior of the SEL, there are heated side mirrors with LED turn-signal indicators. The SE just has traditional side mirrors without any of those extra features. The SEL can be upgraded with LEDs in the truck bed, a power sunroof, a tonneau cover, and a utility track rail and cleat system for the bed. Unfortunately, these are not available on the SE.

However, the SE does have some nice features. Integrated rear bumper steps help people more easily access their cargo, and D rings and storage compartments built into the sidewalls of the bed are very convenient. Plus, there's an under-bed storage compartment that can be locked for security purposes. The lighting on the Santa Cruz is refined, as there are LED Daytime Running Lights and LED taillights. The headlights and high beams are both automatic.

These two trims have cloth seats that are resistant to stains and odors. The SE has a manually adjustable driver's seat while the SEL has a power-operated one. It also has heated front seats and power-adjustable lumbar support in the driver's seat.

Technology plays an important role in the automotive industry, and Hyundai has integrated an eight-inch touchscreen into both of these trims. They have Android Auto, Apple CarPlay, Bluetooth, and two front USB outlets. With the SEL, there's the addition of SiriusXM Satellite Radio. The SEL also has Bluelink Connected Car Service, allowing users to perform various tasks and look up certain kinds of vehicle information using their smartphones. For example, they can remotely start their engines and lock or unlock their doors using an app on their phones.

Wireless charging is optional on the SEL but not on the SE, as is a 10.25-inch digital instrument cluster. If this digital cluster isn't included, then the gauges would be the standard ones, and of course, all the important vehicle information would still be displayed. It can be nice, though, to have a digital screen that showcases data in an easy-to-read format.

Hyundai has given the SE many advanced safety components. It has a rear occupant alert, driver attention warning, and electronic stability control. Importantly, the SE also has forward collision-avoidance assist with pedestrian detection, lane keeping assist, and lane following assist. With these programs, the chances of veering out of position or hitting something in front of the Santa Cruz are greatly reduced.

With the SEL, the safety package has been enhanced with a few extras. They include blind-spot collision-avoidance assist, rear cross-traffic collision-avoidance assist, and safe exit warning. Safe exit warning uses monitors to indicate when it's safe to open the doors on the driver's side. It's great that the SEL doesn't just have warning systems, but it also has mitigation systems that can prevent accidents that may occur when it's too difficult to see vehicles in certain spots.

Compare the SEL vs SEL Premium. What is the difference?

The price jumps pretty considerably when moving from the SEL to the SEL Premium. A main reason why is that the SEL Premium uses a 2.5-liter turbo engine. This turbo engine has the same displacement as the standard engine, but its turbocharger brings a lot of power with it. As a result, the SEL Premium can make 281 horsepower and 311 pound-feet of torque. It's considerably quicker to accelerate and more exciting to drive than the SEL is. Paddle shifters mounted on the steering wheel can be fun to use, too.

Hyundai has matched the turbo engine with an eight-speed wet dual clutch transmission. This type of transmission is commonly found in performance-oriented vehicles. Note that all-wheel drive is standard at this level and that towing capacity is increased from 3,500 pounds to 5,000 pounds.

All of these increases in capability come with a financial cost but don't really impact the fuel efficiency of the Santa Cruz. With the standard powertrain, combined fuel economy is estimated to be 23 miles per gallon. With the turbo engine, that number dips ever so slightly to 22 miles per gallon.

The SEL Premium looks a bit more upscale than the SEL does because it has LED headlights instead of halogen ones. It has LED bed lights so that people can have an easier time seeing what they're doing in the back. Notably, it comes standard with a power moonroof. Many people love having a moonroof because it can let in more light and bring in fresh air. It's definitely a cool feature. It is optional on the SEL in case anyone really wants to have one.

Roof side rails become standard with the SEL Premium trim. They can be practical in case cargo needs to be secured to the top of the vehicle. The SEL Premium has an integrated tonneau cover that can provide security and privacy, a 115-volt power outlet in the sidewall of the bed, and a rail and cleat system. That system was previously mentioned as being available with the SEL.

A leather-wrapped shift knob and steering wheel add to the luxury of the SEL Premium. LED interior lights provide some extra illumination at night and contribute to the ambience of the cabin. The rearview mirror in this trim has an auto-dimming function as well as HomeLink technology, which allows it to serve as a garage door opener.

One last thing to mention about the SEL Premium is that it works with the Hyundai Digital Key program. This means that a smartphone can be programmed to act as a type of key fob. This is useful for those who may want to have a friend borrow the car for the afternoon or for those who plan on taking their vehicles out for a big adventure. When skiing, biking, or hiking, for example, they don't have to take their keys with them; they just have to make sure they have their phones with them in order to unlock the doors and start up the engine.

Compare the SEL Premium vs Limited Trim Levels. What is the difference?

The Limited uses the same type of turbocharged engine that the SEL Premium does. It has many of the same features that are found in the SEL Premium, but there are a few additional elements that make this trim stand out. First of all, instead of having 18-inch wheels like all of the other trims in the Santa Cruz lineup, it rides on 20-inch wheels.

The rain-sensor wipers on the Limited are futuristic. A driver doesn't even have to turn them on or off; they can do that themselves. This frees the driver to concentrate on the other aspects of driving, and it is especially helpful when the rain is intermittent.

Leather seating is exclusively available on the Limited trim of the Santa Cruz. This trim is also the only one to have heated and ventilated front seats. The steering wheel is another place where a heating element has been incorporated.

Hyundai has included more technology with the Limited. It comes standard with a pair of USB outlets in the back row in addition to the two in the front row. It has a premium audio system with Bose speakers as well as a 10.25-inch touchscreen with navigation. This can be so useful when driving in unfamiliar territory or when trying to avoid getting stuck in traffic on a regular commute.

Finally, the Limited has the best safety package out of all the trims. It has navigation-based smart cruise control, which is a program that can adjust the Santa Cruz's speed depending on whether there are upcoming turns or if the leading vehicle has slowed down. The Limited's Highway Driving Assist program is like a semi-autonomous driving system that can make the necessary adjustments to steering and speed. It also has a surround view monitor and blind-spot view monitor. It's pretty amazing that it offers so much assistance while people are driving, and it does so in an unobtrusive and gentle manner.

It's going to be hard to pass up the chance to have a turbo engine because of the extra power that it brings with it. For this reason, it's recommended that potential buyers look into the SEL Premium and the Limited trims.

Understandably, budget plays a big role in this decision-making process. While the Limited has amazing components, such as navigation, leather seats, and a surround-view monitor, it may be just a bit too pricey for many buyers.

The SEL Premium strikes a nice balance. It's more reasonably priced than the Limited is, and it still offers so much, like a moonroof, Hyundai Digital Key, digital instrument cluster, tonneau cover, and wireless charging.