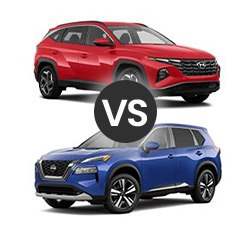 Loaded with options, the compact SUV market is somewhat overwhelming. Many drivers have decided that this is the ideal vehicle type due to the balance of practicality with efficiency. As a result, some automakers have multiple compact SUVs available. This is true of both Hyundai and Nissan.

Both the 2022 Hyundai Tucson and the 2022 Nissan Rogue are well-rounded options that are popular with a variety of drivers. They both offer plenty of features for the price, making either a relatively smart buy. Since the two vehicles seem quite similar on the surface, buyers will want to look closer at their options before making a decision. The guide below is designed to help.

The 2022 Hyundai Tucson has been completely redesigned. Buyers now have three powertrain options to consider, all of which are efficient. A 2.5L four-cylinder comes standard, allowing the SUV to create 187-horsepower and 178 lb-ft of torque. Buyers can also choose to go with a hybrid based on a turbo 1.6L four-cylinder engine that creates 227-horsepower. A plug-in hybrid version of this engine also exists, and it makes 261-horsepower.

There is only one powertrain available for the 2022 Nissan Rogue. It is a turbocharged 1.5L three-cylinder that creates 201-horsepower and 225 lb-ft of torque. A continuously variable transmission is standard, and all models are available with front-wheel or all-wheel drive. Nissan did offer the Rogue as a hybrid a few years ago, but that version was discontinued.

As a hybrid, the Tucson gets 37mpg in the city and 36mpg on the highway. While these are considerably better than the gas-powered variation, they are on the weak side for a hybrid compact SUV. The plug-in hybrid version of the Tucson gets 80 MPGe, and it has an all-electric range of 33 miles.

Everyone wants assurance that the vehicle they are buying will be reliable. While no one can predict the future, J.D. Power does its best to offer an estimate of how reliable a new vehicle will be. On a scale that ranges from zero to 100, the Rogue was given a score of 82. The Tucson, on the other hand, has a slightly higher score of 88.

Both the 2022 Tucson and the 2022 Rogue are enjoyable to drive. Neither is the sportiest option in the compact SUV market, but they are not the dullest either. Both of the SUVs are pretty smooth, too. The Tucson does an especially good job of preventing bumps in the road from being felt in the cabin.

These SUVs offer a respectable amount of passenger space for the class. The Tucson has supportive seats in both rows, and adults should feel comfortable riding in the backseat. That said, the Rogue is equipped with Nissan's Zero Gravity front seats, making it extremely enjoyable to sit in. The second row also reclines, ensuring that everyone stays comfortable in this vehicle.

Moving on to the infotainment setup, both the 2022 Tucson and the 2022 Rogue come standard with an 8-inch touchscreen and two USB ports. From there, however, the Tucson has an edge. It has the wireless versions of Android Auto and Apple CarPlay, plus a six-speaker sound system. Meanwhile, the Rogue has wired smartphone integration and only four speakers for its standard stereo system. The Tucson comes standard with HD radio, while the Rogue comes standard with satellite radio.

When it comes to user-friendliness, the base setup in the Tucson is a clear winner. The touch commands respond quickly and the menus are easy to navigate. That is less true of the available infotainment upgrade that runs on the 10.25-inch touchscreen. Both versions of the Rogue's infotainment system seem more complicated than necessary.

The top Tucson is known as the Limited. It has heated rear seats, driver's seat memory settings, a panoramic sunroof, and more to increase the luxury level. As for the Rogue Platinum, it also has heated rear seats. This version of the SUV further adds voice controls to make life easier.

It is worth taking a look at the safety scores of any vehicle being considered. The Insurance Institute for Highway Safety evaluated the 2022 Hyundai Tucson and found it worthy of the title "Top Safety Pick+". Official testing has not been conducted for the 2022 Rogue, but the incredibly similar 2021 model also got the "Top Safety Pick+" title.

A comparison of the standard driver aids for these two vehicles reveals that they are very similar. Automatic high beams and driver attention monitoring is standard for both. They have forward-collision mitigation and pedestrian detection, but only the Rogue adds standard cyclist detection as well. The Rogue also has rear automatic emergency braking and rear parking sensors on all models, plus blind-spot monitoring.

The Tucson does come standard with a rear seat alert, which is designed specifically to prevent children and pets from being left behind. This is not an available feature for the Rogue. Both of these vehicles offer adaptive cruise control and a highway driving assist feature on select models. Surround-view camera systems are found on upper trim levels of the Tucson and Rogue as well.

Those who choose the new Tucson can get Hyundai's safe exit assist feature. They can also choose a model wtih the remote smart parking assist, which allows the Tucson to be parked while standing outside of it. Meanwhile, only the Rogue can be equipped with a head-up display.

Many factors go into how much it will cost to own a vehicle. Not only will buyers be making their loan payment, but they will also be paying insurance, maintenance, and repair costs. Fuel costs are also a major consideration, as well as the depreciation the vehicle will experience. To help get a better idea of how much to budget, buyers can compare the projected costs of the 2022 Tucson and the 2022 Rogue over the course of five years. All numbers are based on front-wheel-drive versions of the entry-level models because they are the most affordable.

The Hyundai Tucson holds onto its value relatively well. It is expected to lose roughly $8,000 in value in the first five years. Buyers can compare this to the Rogue, which will lose around $9,750 during the same time. Maintenance and repair estimates for these vehicles are very similar. Buyers will spend around $2,100 on the Tucson or about $1,950 on the Rogue.

One way that the Rogue has a definite edge over the standard Tucson is in efficiency. Thanks to its three-cylinder engine, it should only cost drivers around $6,500 in fuel over the course of five years. That is quite a bit less than the Tucson, which will cost approximately $7,400. Of course, buyers who have their heart set on the Hyundai SUV can lower this number by paying extra for a hybrid powertrain.

Both the 2022 Hyundai Tucson and the 2022 Nissan Rogue are respectable options for anyone seeking a small SUV. They are both reasonably fuel-efficient, and they have impressive cargo capacities for the class. Drivers may struggle to pass on the highway behind the wheel of either of these options.

There are some things that the Tucson does better than the Rogue. For starters, it has a lower price tag. It technically has more cargo space as well. The warranty of the Tucson is also much more reassuring than the one the Rogue comes with. Thanks to its redesign, the Tucson looks and feels more upscale than ever before.

At the same time, the Rogue will likely save drivers money at the pumps if they are not interested in a hybrid SUV. It has incredibly comfortable front seats and reclining rear seats, along with standard blind-spot monitoring and an available head-up display.

Shoppers who are seeking excellent fuel economy will be well-served by the 2022 Rogue, while those who are looking for a more affordable option that offers great value will want to check out the 2022 Tucson.