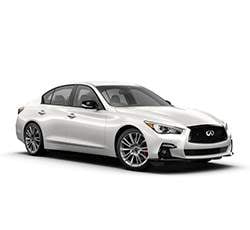 Should You Buy a 2022 Infiniti Q50? Here Are Some Reasons For and Against

If you’re looking for a value-packed sports sedan, be sure to test drive the 2022 Infiniti Q50. Not only is the new Q50 less expensive than many of its competitors, but it also brings an admirable level of performance to the table. Beautiful exterior styling also helps this car to stay relevant in one of today’s toughest segments. Here are the top strengths and weaknesses of the Q50.

When checking out the Q50’s primary competitors, car shoppers will notice that most feature a standard turbo four-cylinder engine. A twin-turbo V6 engine is the Q50’s standard power source, which helps make this sedan a great performance bargain. Infiniti rates the engine to kick out a solid 300 horsepower. Responsiveness is further added by the engine’s 295 pound-feet of torque. Drivers can look forward to enjoying gutsy acceleration. Gas mileage tops out at a decent 28 mpg on the open road.

Although the 2022 Infiniti Q50 is not the most aggressive sports sedan in the class, it still offers an entertaining driving experience. Most drivers will have no complaints about the Q50’s agility. A wide stance helps this car to confidently dance around curves. Active Trace Control comes standard throughout the lineup. When cornering, this system automatically adjusts the sedan’s braking and power delivery to improve stability. Expect the Q50 to deliver a fun drive on twisty back roads.

Drivers seeking a more enthusiastic performance should step up to the Q50 Red Sport 400. While it features the same twin-turbo V6 engine, it’s calibrated to develop more power. Output increases to an inspiring 400 horsepower and 350 lb-ft of torque. The extra brawn under the hood lowers the car’s 0-60 mph time to around 4.5 seconds. Infiniti also equips the Red Sport 400 version with beefier brakes and an adaptive suspension system.

Despite its increased starting MSRP, the 2022 Infiniti Q50 remains among the segment’s strongest values. Prices now begin at slightly more than $41,000. However, buyers will now receive a greater number of premium luxury features. Its European rivals are significantly more expensive. To get the BMW 3 Series with a turbo six-cylinder engine, car shoppers must spend more than $50,000. Keep in mind that the 3 Series also demands extra for certain amenities.

Many people are fond of the Infiniti Q60’s seductive exterior styling. Unfortunately, this luxury sports coupe isn’t practical enough for some drivers. The new Infiniti Q50 could prove to be the perfect alternative. It offers the same powertrain options. These two models also have a similar price tag. Folks who have a family will especially appreciate the Q50’s four-door design. The Q50 also provides more rear legroom and a bigger trunk.

The Q50 last received a styling refresh in 2016. Although the Q50 may be older than many of its competitors, it still has a very attractive appearance. This car's sleek exterior design has aged gracefully over the years. Premium paint options, such as Dynamic Sunstone Red and Grand Blue Pearl, help the sedan to grab more attention on the street. While the entry-level trim looks good enough for most drivers, upper trims feature larger wheels and more aggressive fascias.

With the arrival of wireless Apple CarPlay, iPhone users no longer have to use a cable when connecting to the car’s infotainment system. Drivers won’t even need to touch their phones while on the road. Within seconds of getting behind the wheel, they can access music playlists and apps. Luckily, this feature is standard on every new Q50.

Like a traditional sports sedan, the Infiniti Q50 is designed with a rear-wheel-drive system. However, an Intelligent AWD system can be added for an extra cost. It constantly monitors for slippage. When a loss of traction is detected, the system will immediately take action. If you happen to be traveling in dry weather, this smart AWD system can send up to 100 percent of the engine power to the rear wheels. Drivers can enjoy the best of both worlds.

1. Not as Engaging as Some Other Sports Sedans

Most people will enjoy being behind the wheel of the 2022 Infiniti Q50. However, it’s not quite as engaging as some other sports sedans. While the Q50 handles well, some driving enthusiasts will prefer a more aggressive performance machine. This car is certainly not built to compete on the track.

Newly available wireless Apple CarPlay makes the Q50’s infotainment system more modern than before. Unfortunately, it’s still a notch below the competition. During real-world driving, the system’s dual-screen setup isn’t very practical. In fact, some drivers will find it to be a bit distracting. Infiniti’s new and improved infotainment system is not offered on the 2022 Q50.

With premium fuel now being so costly, some drivers will not want to spend the extra money. However, Infiniti tunes the Q50 to operate on premium gasoline. The use of a lower octane will likely result in a noticeable loss of performance. Overall fuel economy may also take a hit.

4. Some Electronic Driving Aids Can Be Overly Sensitive

The Q50’s electronic driving aids are designed to enhance safety. However, certain systems can overreact to other vehicles on the road. Fortunately, most of these technologies allow drivers to adjust the level of sensitivity.

When comparing the 2022 Infiniti Q50 to last year’s model, car shoppers will notice a difference in price. The sedan’s starting MSRP has increased by more than $5,300. While buyers will receive a greater number of high-end features, some people may prefer last year’s less expensive base model.

The 2022 Acura TLX is priced to compete against the Q50. Many automotive reviewers praise the new TLX for its improved performance and technology. However, it comes standard with a less powerful four-cylinder engine. A greater number of premium features also come standard on the Q50, including leather upholstery and a high-performance audio system.

The CLA-Class is one of Mercedes-Benz’s least expensive sedans. It offers a great deal of luxury for the money. However, expect the Infiniti Q50’s standard engine to deliver a more powerful performance. A tighter backseat also makes the CLA-Class less accommodating for families. Furthermore, Mercedes-Benz forces buyers to pay extra for adaptive cruise control and other desirable features.

While the 2022 BMW 3 Series is a top pick, it loses to the Q50 in a few key categories. For starters, the sedan’s higher trim levels are noticeably more expensive. A more compelling list of standard equipment gives the Q50 another advantage. Heated front seats, a premium sound system, and leather upholstery are all optional on the new BMW 3 Series.

When searching for a new luxury sports sedan, car shoppers should not overlook the 2022 Infiniti Q50. It’s a strong value that comes loaded with premium features. Although some cars may offer a more exhilarating performance, most people will be impressed by the Q50’s muscular powertrain. Decent highway fuel economy also makes the Q50 good for taking road trips.

Although there are many upsides to the new Q50, drivers must also consider its weak points. While some people actually like the sedan’s infotainment system, others aren’t too fond of it. Another potential con is the 2022 model’s steeper starting MSRP. Some folks may not be interested in the extra standard features.

View Pros and Cons for other Infiniti Models: