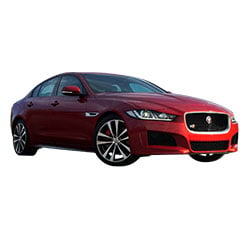 Should You Buy a 2017 Jaguar XE? Here Are Some Reasons For and Against

The production of high-end luxury compact sedans has been very competitive especially with the top German auto dealers setting the standards with their chic designs. The British manufacturer, Jaguar, has joined the fray with the production of a series of pocket-friendly sedans, with the most recent 2017 Jaguar XE. The XE’s clean and elegant finish integrated with its remarkable performance has inspired us to review it for you in this post.

The 2017 Jaguar XE is a whole new sports sedan with a lot of features packed under the hood. The great performance of this car is what puts it ahead of the competition.

The XE series comes with an eight-speed automatic transmission that works great with the three engine types equipped under its hood. A 2.0-liter supercharged engine with four cylinders pumping a 240 horsepower as well as a 251 lb-feet of torque gives the 2017 Jaguar XE excellent acceleration and performance. In addition to that is a 20d turbo-diesel two-liter engine with four cylinders that contributes a 180 horsepower and a 318lb ft torque. The third 35t engine is a supercharged V6 with the potential of yielding 340hp and a 332 pound-feet of torque.

The vehicle comes with a standard rear-wheel drive which works exceptionally when cruising on highways. The four-wheel-drive system in the XE is performance-oriented; meaning that it is enabled when the car traction indicates that there is a need for more power on the front wheel. The 4WD system is run by the XE’s 2d and 35t engines giving it a robust push against an array of obstacles.

The 2017 Jaguar XE has some state of the art safety features such as stability and traction control. Also, it has a computerized hazard system which goes off automatically under heavy or abrupt breaking. The premium trim level has a rear view mirror while the R-Sport has far much more robust features including drowsy driver monitoring, collision warning, and an automatic emergency braking system among others. Other technology featured safety aspects are available in the Driver Assistance package.

This is a vehicle built for those who appreciate a good drive in the suburbs. The steering is quite responsive to the vehicle weighting and can communicate the car's demand to the driver. The 2017 Jaguar XE can be comfortably regarded as the best in its class with regards to the driving dynamics. Its driving experience is influenced by the engine you choose. A 35-step supercharged engine gives you a smooth propulsion and power to soar through the steepest of climbs.

One thing that Jaguar Company is particularly known for is the suspension and stability control. The XE is quite compact and can wind through sharp corners without breaking a sweat. Despite being athletic, it is still well–suspended to take big shocks from bumps without punishing the driver. The adaptive stability gives this ride an edge in ride comfort and handling.

The 2017 Jaguar XE comes in four main trim levels which are base, Premium, Prestige, and R-Sport. All the trims have unique features such as different rim sizes, engines, and additional performance tweaks. Some of the features of the base trim include automatic start and stop for fuel conservation, three drive modes climate control and an optional navigation with InControl apps among others.

2017 Jaguar EX model does have not only great aesthetics but also a strong construction. The body is made up of aluminum, but still, manages to be lightweight and strong enough. The power under its hood can easily haul its 3650 lb body. The XE’s design has a few creases and has been tuned to feature fine-lined side panels in a sleek design. It has a J-shaped headlight and U-shaped taillights as well as a straight honeycomb grill which brings out the real Jaguar signature face.

XE has two infotainment systems which include an eight-inch and another 10.2-inch touch screen displays. The 10-inch system responds faster to input signals, is much clearer and is equipped with more advanced navigation features. The touch screen responds to some standard phone maneuvers like swiping or pinching and also has physical buttons for the frequently used features.

The XE’s has an eco-friendly aspect which is meant for the eco-conscious drivers. Its turbocharged diesel engine is much more efficient than some members of its class. It returns 32 mpg in city drive but can go up to 42 mpg on the highway.

The powerful engines on the XE are not just meant to take you to work and back. The different trims such as R-Sport offer one of the best track performances among the sedan car types. The summer wheels provide great traction on dirt and ice especially when the 4WD is enabled. Weather control aspects promise you reliability in different climates.

Most drivers are of the opinion that the interior design of the Jaguar XE still has a lot to look up to when compared to other previous models. It doesn’t offer the absolute luxury required of a sedan.

The 8-inch touch screen is very unresponsive at times or can get real slow. In some cases, you have to wait for some time before it can launch to be ready to take input.

Most of the XE owners have complained of the little room offered in the back. For such a long sedan, most of the space has been taken by the engine up front leaving little passenger room.

How 2017 Jaguar XE stacks up to the Competition

The XE series is a great sedan living up to most drivers’ expectation concerning performance and handling. As compared to its main competitors like Audi A4 and BMW 3 series, it leads in aspects such as handling and steering response, driving dynamics and cargo space. When looking for a great entry-level sedan–sport category car with excellent aesthetics fused with comfort, the XE is the way to go. It, however, needs work on other features like the interior look, back seat space, and the infotainment system.

The 2017 Jaguar XE series comes with a remarkable engine collection that the power-hungry drivers can opt for. On the contrary, if you are after interior luxury then you might get a little disappointed with the XE.