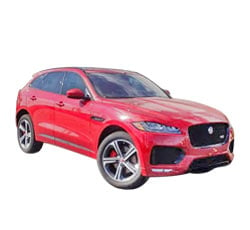 Should You Buy a 2019 Jaguar F-Pace? Here Are Some Reasons For and Against

The Jaguar F-Pace has only been available on the market since 2017 but has made a huge splash since its inception. Based on the C-X17 concept design, the F-Pace is a luxury SUV that packs in a lot of power while still feeling as zippy as a sport sedan. The 2019 Jaguar F-Pace has quite a few new and exciting features, but it also has a few noteworthy downsides, including a noisy cabin and dwindling ride quality on the larger wheel sizes. Also, if you want the best fuel efficiency, you will have to spend more money to get it with the optional turbodiesel engine.

Quite a few things have been changed on the 2019 Jaguar F-Pace. The most obvious alteration comes in the form of the brand new SVR variant. There is also a larger 10-inch touchscreen display that now comes standard. All gasoline-powered trims have a bigger fuel tank, which is now 21.7 gallons. Additionally made standard for the model year are front and rear parking sensors, a collision mitigation system, a rearview camera, and lane keep assist.

The 2019 Jaguar F-Pace is loaded with more standard features than ever before and outdoes quite a few of its competitors in this aspect. This year, Jaguar has upped the ante by making a lot of driver aids standard, including lane keep assist, parking sensors for the front and rear of the vehicle, and forward collision warning and mitigation. The addition of a new standard 10-inch infotainment screen is also a nice touch that speaks to the fact that this is a luxury vehicle. Other standard infotainment features include smartphone app integration, an 11-speaker sound system, and a USB port.

An exciting addition to the F-Pace line-up this year is the new SVR variant. This model is powered by a 5.0-L supercharged V8 engine which generates enough power to get it from 0 to 60 mph in just over 4 seconds. Also, it can reach a top speed of 176 miles per hour. The forged alloy wheels and polished aluminum quad tailpipes give the SVR a sporty exterior appeal while the leather performance seats offer a nice mixture of sportiness and luxury inside of the cabin.

There are several different engine options that you can choose from on the 2019 Jaguar F-Pace, but one of the favorites from the past few model years is the 3.0-L supercharged V6, which is what comes on the 35t engine configuration. This engine is able to garner an impressive 340 or 380 hp on the S model and 332 lb-ft of torque. This much power leads to a strong overall performance that gives the F-Pace the advantage over many of its competitors. Additionally, the transmission that the engine is paired with provides ample responsiveness and has a smooth feel to it.

The sport sedan appeal is not lost on the F-Pace regardless of which engine it has equipped. The V8's speedy 4.1-second acceleration speed puts the F-Pace at the top of its class, and the supercharged V6 (which can go from 0 to 60 mph in roughly 5.4 seconds) is certainly nothing to scoff at. The F-Pace also has a sporty handling quality to it while navigating winding roadways.

While the other engines are, as can be expected, rather thirsty, the 2.0-L turbocharged diesel engine is pretty generous. This engine is capable of getting a combined 29 mpg (26 mpg city and 33 mpg highway). While you might not get the most high-octane performance from the engine, you will get a better return on fuel.

Cargo space in the 2019 Jaguar F-Pace is better than most of its competition. With all seats in place, there is 33.5 cubic feet of cargo space available. This can be maxed out to 63.5 cubic feet when the rear seats are folded down. Since the seats fold almost completely flat, space is abundant, and loading and unloading cargo is made even easier.

While this vehicle is not meant for serious off-roading adventures, the F-Pace can handle some light off-roading. With the massive amount of safety features made standard, the F-Pace is better-equipped to handle slick road conditions and trails than quite a few of its competitors.

Up front and in the rear, comfort abounds within the cabin of the 2019 Jaguar F-Pace. While seat ventilation is an optional feature, it is one that is nice to have equipped. The seats themselves have plenty of lumbar and lateral support, and the rear seats are well-angled for passengers to be able to relax. The abundance of space throughout the cabin only adds to the feeling of comfort you get from the seats.

Climate control works exceptionally well on the F-Pace, evenly distributing air throughout the cabin. Many of the controls for the system are physical knobs and buttons, which makes it a lot easier for many people to adjust them. There are dual-zone rear climate controls that have heaters and seat coolers, which add an extra sense of comfort during very hot or chilly days.

10. A Great Towing Capacity For Its Class

It might be surprising to learn that the 2019 Jaguar F-Pace has a good towing capacity for the luxury crossover SUV segment. With a maximum towing capacity of 5,290 pounds, the F-Pace bests its top rivals, many of which do not tow anywhere above 5,000 pounds. This probably will not be a huge selling point for the F-Pace, but it definitely adds another level of attraction for some buyers.

The biggest downfall to the 2019 Jaguar F-Pace is that a substantial amount of road and wind noise seeps into the cabin. While it does not get overly obnoxious, the F-Pace's cabin lacks the mellowed-out, vault-like sound quality that you get in many of its rivals. There is also a good amount of engine noise that comes through, but as this is a sportier vehicle, it is hard to negate this issue.

Some, but not all, of the interior materials used in the F-Pace look like they belong on lower-priced, non-luxury vehicles. Some of the padding found throughout the cabin looks a bit thin, as if it might tear somewhat easily. A lot of the surfaces seem to lack the thickness of texture and high-end sophistication of what you might expect to see in a luxury vehicle.

3. Lack of Ride Comfort From the Larger Wheels

The larger the wheels you opt for, the more uncomfortable the ride quality becomes on the 2019 Jaguar F-Pace. Some of the discomfort might, of course, be due to the stiff suspension, but the wheel size seems to give more issues. The optional 22-inch wheels give off a level of stiffness that many drivers will find to be excessive and even uncomfortable. Taking the vehicle onto rougher road surfaces will result in diminished ride comfort with the larger wheels equipped.

Unfortunately, the infotainment system just is not as refined as the systems found on the competition. The smartphone app integration feature is downright clunky and obnoxious, failing to respond to certain commands and load every song. Drivers should get accustomed to playing music and using apps directly from their smartphones instead of using the app integration system. Also, the vehicle's system does not have navigation that is programmable by voice, which is something that most vehicles now have as part of their voice controls. This omission leaves a lot of drivers scratching their heads.

The 2019 Jaguar F-Pace has some stiff competition from the 2019 Mercedes-Benz GLC-Class. The GLC-Class offers up a good fuel economy, a chic interior design, and performance abilities that make it both luxurious and a solid daily driver. The cabin itself is large and makes sitting in the rear is comfortable even for taller adults. The downside is that the vehicle gets more expensive with the addition of features and does not offer them in the same abundance as the F-Pace.

Another major contender for the year is the 2019 Audi Q5. This luxury vehicle was redesigned for the 2018 model year and features a strong 2.0-L turbocharged 4-cylinder engine. Unfortunately, this is the only engine that you can choose from, much unlike the array of engines found on the F-Pace. The Q5 is also lacking the expansive amount of cargo space that you will find on the F-Pace. However, all-wheel drive comes standard on the Q5, which is certainly an alluring trait for many drivers.

The 2019 Jaguar F-Pace is one of the most sporty luxury SUV crossovers out there. With its long list of standard safety features, number of solid engine options, and plenty of comfort to be found within its cabin, the new F-Pace does a good job of mixing a strong performance with all the creature comforts you can ask for on a luxury vehicle of its price.

Save Money on a 2019 Jaguar F-Pace:
Find New Car Clearance Prices - Many Vehicles are Selling Below Dealer Invoice Prices.

Every dealer offers a secret price. Many prices are below invoice. Find yours here.
2019 Jaguar Buying Guides: