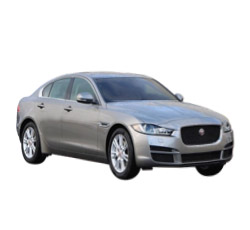 Should You Buy a 2019 Jaguar XE? Here Are Some Reasons For and Against

The 2019 Jaguar XE is among the British automaker's least expensive cars. A lot of drivers will enjoy this small luxury sedan's playful handling and sporty exterior styling. While all versions of the XE excel in the fuel economy department, an available supercharged V6 engine seriously elevates its level of performance. Furthermore, more standard features are now found on the base model. Does the new Jaguar XE stand a chance against its primary competitors?

This year, Jaguar has lined the inside of the XE with more standard equipment. Meanwhile, voice controls have been added to the available navigation system. A couple of limited-edition models have also hit the lineup.

The 2019 Jaguar XE comes standard with a boosted four-cylinder engine, which returns a combined 28 mpg. If you are willing to sacrifice some quickness, you can save even more fuel by getting the available diesel engine. According to the EPA, it can deliver a frugal 32 in town and up to 42 mpg on the highway. Drivers who do a lot of commuting will especially appreciate the diesel-powered XE's fuel-efficient nature.

Drivers who are serious about performance should choose the supercharged V6 engine. It transforms the 2019 Jaguar XE into a borderline sports car. Jaguar tuned it to push out an awesome 380 horsepower. When launched from a dead stop, the high-output XE can easily rip a 0-60 time of 4.9 seconds. Although the extra muscle results in lower fuel economy, you should have no troubling getting up to 30 mpg on the freeway.

On the road, the 2019 Jaguar XE definitely feels athletic. In regard to handling, it can challenge the segment's front runners. A double wishbone front suspension helps the XE to dip into corners like a traditional sports sedan. You can obtain even better body control by upgrading to the available adaptive suspension. Luckily, there's no harshness in the XE's ride. In the event that you overstep the sedan's limits, the advanced stability control system will take action.

4. Among the Best-Looking Compact Sedans

The Jaguar XE's smooth styling will leave some car buyers drooling. Unlike some of the XE's European counterparts, it does not have any questionable styling cues. From its signature Jaguar grille to its sleek hood, every aspect of the XE looks classy and sporty. Large mesh intakes are found on the racier S model. Blacked-out exterior trim is available as an option. To give the XE a more aggressive stance, upgrade to the optional 20-inch wheels.

On the inside, the 2019 Jaguar XE looks and feels like a miniature version of the larger Jaguar XF. While the upper trims are obviously more posh, even the base model will impress drivers in the market for an entry-level luxury sedan. Front passengers will experience especially good comfort. Because the seats are so adjustable, it won't be hard for you to obtain a great driving position. Heated and ventilated functions are available for an extra cost.

The XE was already Jaguar's most affordable sedan. Prices start at less than $38,000. However, upgraded standard features should make the 2019 Jaguar XE even more attractive to car buyers. Replacing last year's standard 8.0-inch touch screen is a larger 10.0-inch display. Drivers will also appreciate the sedan's now standard backup camera, which helps you to better see parking lot obstructions. Some of the other standard items include a sunroof, keyless entry, and Bluetooth.

All versions of the new XE are backed by a 5-year/60,000-mile warranty. It's among the best bumper-to-bumper warranties in the segment. If you happen to experience a problem with your new XE, you can expect to save a lot of money on repairs. Along with Jaguar's EliteCare warranty comes 60,000 miles of complimentary scheduled maintenance. Furthermore, drivers will enjoy 24-hour roadside support.

Most folks will be happy with the XE's standard analog gauges. However, Jaguar's available Interactive Driver Display is more exciting. This fully digital gauge display allows you to choose from three different themes. When traveling to an unfamiliar location, you'll find the Interactive Driving Display to be especially helpful. It'll put high-definition maps directly in your field of vision.

A basic 125-watt sound system comes standard on the new 2019 Jaguar XE. While it delivers decent sound quality, the available Meridian Surround Sound System is surely a worthy upgrade. An 825-watt amplifier sends power to a total of 16 speakers. Bass response is enhanced by a thunderous subwoofer. The end result is a more entertaining morning commute.

The previous Jaguar XE didn't offer a voice-activated navigation system. This new feature makes the sedan a more rewarding traveling companion. Instead of taking your hands off the wheel, you can use your voice to control the system.

When it comes to long-term reliability, Jaguar has long remained a few steps behind luxury brands such as Lexus and Acura. The Jaguar XE's poor reliability rating is definitely a sore spot. This fact may concern the drivers who don't like spending extra money on repairs. Some of the potential problems can't be fixed by the average backyard mechanic. Although the sedan does have a great warranty, it will eventually run out at some point.

If you plan to use the 2019 Jaguar XE for the purpose of everyday commuting, you'll find it to be a good choice. However, it's a snug fit for most families. Although the XE is designed to accommodate up to five people, folks sitting in the rear may feel a bit cramped. There's a skimpy amount of legroom. Rivals, such as 2019 BMW 3 Series and the 2019 Acura TLX, provide a lot more space to kick back.

3. Must Pay Extra for Certain Features

While the 2019 Jaguar EX comes loaded with a fair amount of equipment, you must pay extra for features that come standard on some competitors. For example, Jaguar forces buyers to purchase Apple CarPlay separately. Automatic emergency braking is also not equipped on the base XE.

4. Some Models Cost A Lot

If you are looking for all the bells and whistles, expect the sedan's total cost to balloon. The more performance-focused XE S model has an MSRP of around $53,000. However, adding options such as AWD will cost you to spend more money. Expect the new Landmark Edition and 300 Sport trims to be even pricier.

All of the XE's available gasoline engines require premium fuel. With high octane now being so expensive, some drivers may not want to pony up the additional cash. Filling the tank with regular will likely cause performance issues and decreased efficiency.

How It Stacks Up Against the Competition

The Audi A4 is priced to compete against the 2019 Jaguar XE. Not only does the Audi A4 come standard with popular in-car tech such as Apple CarPlay and Android Auto, but it also provides more room for families. Although the Audi A4 outshines the Jaguar XE in several aspects, some people may simply like the XE's distinctive styling.

For years, the BMW 3 Series has been considered to be the segment's benchmark. Although the competition has closed the gap, you'll still find the 3 Series to be hard to beat. It's roomier and packs more standard equipment.

The Acura TLX is another good option. Expect it to be far more dependable than the new Jaguar XE. A more spacious backseat gives you another reason to consider the new TLX. Acura's new A-Spec appearance package looks dazzling. When it comes to performance, the Jaguar XE gets the nod.

Think hard before you decide to drive home a new 2019 Jaguar XE. While it's very handsome and drives well, a track record of poor reliability makes it a less rewarding long-term investment. You're family also may not like the sedan's confined interior. However, Jaguar's outstanding warranty will protect you for at least a few years.

Save Money on a 2019 Jaguar XE:
Find New Car Clearance Prices - Many Vehicles are Selling Below Dealer Invoice Prices.

Every dealer offers a secret price. Many prices are below invoice. Find yours here.
2019 Jaguar Buying Guides: