2014 Jeep Cherokee Pros vs Cons. Should You Buy? 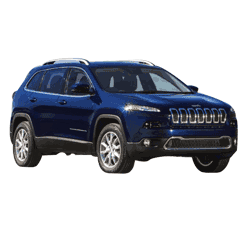 The 2014 Jeep Cherokee has been completely redesigned for this model year, featuring the rugged look and feel you expect from the Jeep name with an unexpected refinement. If you're in the market for a small SUV, consider the Cherokee, which is ranked among U.S. News and World Report's Top Ten Affordable Crossover vehicles. For the 2015 model see - Jeep Cherokee Pros and Cons.

Why you should buy the 2014 Jeep Cherokee - the Pros

1. Plenty of Power
True to its offroading roots, the Cherokee is one of the few cars in its class with an optional V6 engine, which offers an unprecedented 271 horsepower. And in combination with the nine-speed automatic transmission, you can expect a smooth ride regardless of the road conditions. In fact, U.S. News also ranked it as one of the top ten off-road SUVs.

2. Value
Starting at $22,995, the Cherokee has been named one of Kelley Blue Book's Top Ten SUVs under $25,000. Although the low price might make you take a look, what will make you purchase is the best in class features you'll find in the competitive crossover arena.

3. Off-Road Capabilities
The is one of the top selling points of the Cherokee, and the 2014 model does not disappoint. In addition to the standard front-wheel drive model, all four trim levels are also available with two separate levels of all-wheel-drive. The first, Action I, is the standard light duty 4WD that most drivers are accustomed to, while Action II takes it to the next level with handling that will let you take on even the rockiest terrain. What's more, the unique Selec-Terrain traction-control system lets you select separate settings for snow, sand, mud, and rocks.

4. Technology
The 2014 Jeep Cherokee comes standard with 8.4-inch touchscreen interface, while a slew of automatic features--such as forward collision, lane departure and blind-spot warning systems and automated parallel and perpendicular parking--are available as options. And when you're on the go, you'll love the available wireless device charging pad.

5. Interior Styling
The inside of the Cherokee has the classic Jeep Americana flavor, updated for the 21st century. The supportive, comfortable front seats come trimmed in cloth, but you can also get genuine Nappa leather for an additional charge. If you choose a higher trim level, you'll also benefit from power adjustable and heated seats with a memory option function.

6. Fuel Economy
While it's unusual for such a powerful vehicle to get great gas mileage, the 2014 Jeep Cherokee delivers. The Environmental Protection Agency rates the Cherokee at 31 mpg on the highway, better than many less robust cars in this class.

7. Plenty of Cargo Space
Although the Cherokee's roomier back seat somewhat diminishes cargo space, drivers will find that there's still plenty of room to stash everything you need. There's plenty of room within the car to store small items (including the massive glove compartment), while the rear seat slides to offer a generous amount of room in the rear.

8. Safety
The 2014 Jeep Cherokee has a four-star rating from the National Highway Traffic Safety Administration (NHTSA), and a five-star rating from the NHTSA in side collision tests. It's also a top safety pick from the Insurance Institute for Highway Safety (IIHS). In addition to ten standard airbags, the Jeep features a host of safety elements in its base model, including stability and traction control and tire-pressure monitors. The styling of the car and the surround-view cameras maximize driver visibility, which also bolsters the safety rating.

9. Exterior Styling
Built on the Dodge Dart platform, the Cherokee makes the most of its rugged appeal. It keeps the iconic Jeep front end treatment while also incorporating a less boxy, more streamlined look that brings the vehicle up to date with a modern feel.

10. Open Air Sunroof
Nothing says summer like a Jeep with the top off. While the Cherokee's top isn't totally removable, the dual-sided sunroof makes it feel like you're in a convertible, with both a power sliding glass front panel and a shaded rear panel, an option that lets the Cherokee stand out from the crowd.

While the 2014 Cherokee is a rugged, adventurous choice in the crowded small SUV market, it may not be for everyone. If you aren't interested in off-roading, you may find that the Cherokee isn't worth the price tag, since you're also sacrificing interior space. And while the gas mileage is impressive, there are better fuel economy options in the Cherokee class as well. That says, this is the best small Jeep that's been produced in years and a welcome addition to the classic American brand.

• 2018 Jeep Cherokee trim levels. What you get with each trim configuration.