2015 Jeep Cherokee Pros vs Cons. Should You Buy? 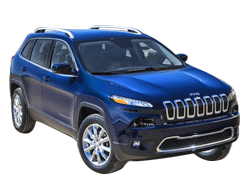 Should You Buy a 2015 Jeep Cherokee? Here Are Some Reasons For and Against

The Jeep Cherokee is a well-mannered crossover SUV with impressive off-road capability due to the Jeep Grand Cherokee heritage. Starting with a wide compact car platform and nine-speed automatic transmission, the four trim levels Sport, Latitude, Limited and Trailhawk offer a broad range of capabilities from comfortable city commuting to mountain-climbing and swamp-wading off-road abilities.

Top Ten Reasons to Buy a 2015 Jeep Cherokee - The Pros

1) The base Cherokee Sport with 2.4 liter four-cylinder engine and front wheel drive gets an estimated fuel economy of 22 mpg city /31 mpg highway. The nine-speed automatic transmission is standard on all models, a first in its class.

2) This crossover offers a good range of well-executed civilized comforts for driver and passengers when used for commuting. The Jeep has a classy inviting upscale environment with soft-touch surfaces on the dash, door panels and center console and attractive trim on the seats.

3) The Cherokee comes with ergonomically designed seating with good support for both driver and passengers and trimmed in attractive high-quality cloth or optional leather. The driver's seat offers ample adjustability and comfort, while the rear seat has forward-and-backward adjustment and recline capability. There is plenty of rear legroom and hip room for adult passengers without heads into bumping the ceiling. The rear seat also slides to accommodate passengers or cargo.

4) An optional 8.4-inch touchscreen entertainment and navigation screen display sets the industry standard for both ease-of-use and lack of information overload. Elegant and intuitive in its simplicity, the large buttons are easy to access, and it responds quickly to user input.

5) Off-road performance of the Jeep Cherokee, especially with the optional V-6 engine, is SUV class-leading with any of the three 4WD options, Active Drive I, Active Drive II and Active Drive Lock. Consider the Jeep Cherokee to be the Swiss Army Knife of crossover-SUVs, with its more than capable approach and departure angles of 30 and 32 degrees, an optional ground clearance of 8.7 inches and a hauling capacity of 4500 lbs.

7) The Cherokee tests highly on safety. Ten airbags, including rear-seat side airbags and driver and front passenger knee airbags are now standard. Except for a small-overlap test not performed, the IIHS (Insurance Institute for Highway Safety) rates it highly. The NHTSA (National Highway Traffic Safety Administration) rates it at five stars in side-impact tests and four stars overall.

8) Optional safety packages offer collision warning and mitigation features. Forward Collision Warning including low-speed crash mitigation support. Adaptive cruise control can bring the Cherokee to a complete stop if it detects a collision impending. Optional lane-departure systems, blind-spot monitors and parking sensors can trigger the Jeep to a complete stop at low speeds if it detects any obstacles.

9) A rearview camera expands the driver's view whether backing up in the driveway, performing parallel parking, watching out for pedestrians or other vehicle traffic. The ParkSense feature also automatically nudges and steers the car into a parallel parking spot while the driver serves as a failsafe.

10) The 2015 model Jeep Cherokee with V-6 engine introduces a fuel-efficient engine start-stop (ESS) system over the 2014 model. The automatic start-stop turns off the engine when the Cherokee is in gear but at a complete stop, and turns it back on again when the driver lets up on the brake pedal, thus saving gas in congested urban traffic situations, during lengthy red lights, or at railroad crossings.

1) The cargo area is limited compared to its competitors the Toyota RAV4, Honda CR-V, or Ford Escape, having about 13 to 18 cu feet less than their cargo spaces. Depending on the position of the sliding second row, the Cherokee has 24.6 to 29.1 cu ft of cargo space, and folding down the split rear seat yields 54.9 cu ft. It has however, plenty of pockets inside the cabin for storing small items.

2) The Cherokee's four-cylinder engine has comparable power with competitors. But because the vehicle itself is relatively heavy for a small crossover SUV, it can feel sluggish when accelerating up to highway speeds.

3) The exterior is uncertain in its styling. The front end appearance shows the separation between headlights and thin underslung jaw that typify the Jeep face. This may be a quirk that some people will find appealing.

1) The 2015 Jeep Cherokee isn't more spacious inside than other roomy compact crossovers like the Subaru Forester, Hyundai Santa Fe Sport, and Honda CR-V. Nor does it have a small third-row seat option as does the new Nissan Rogue.

2) Instead of the hard plastic surfaces found in the interiors of competitors Honda CR-V or Toyota RAV4, the Jeep has a classy inviting upscale environment with soft-to-the-touch surfaces on the dashboard, door panels and center console and attractive trim on the fabric or leather seats.

With this iteration of the Cherokee, the Jeep brand has again strengthened its crossover credentials over last year's all-new vehicle. The 2015 Jeep Cherokee may be the first compact SUV to be a city-friendly crossover with the heart of a Trail Rated Jeep. The Cherokee's Dodge Dart Alfa Romeo Giulietta platform delivers a comfortable premium ride, while the optional 4WD Active Drive packages offer more rugged off-road possibilities than most city drivers would ever come close to realizing.