2016 Jeep Patriot Pros vs Cons. Should You Buy? 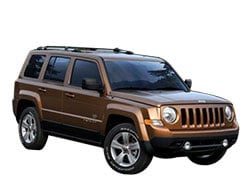 Should You Buy a 2016 Jeep Patriot? Here Are Some Reasons For and Against

Even before the dust settled on the recently released Jeep Renegade, a better version of the 2016 Jeep Patriot is scheduled to come out next year. The 2016 Jeep Patriot definitely boasts of better features and tweaks to urge an upgrade for the Jeep lover.

1) More Horsepower on the Road

Whether you are cruising in the city or highway, the Jeep Patriot 2016 is quite conservative on fuel economy. It manages an MPG of 23 while driving in the city and 30 on the highway. It’s the same fuel economy you get on its predecessor, though the Mazda takes the bar higher with an MPG of 26 City and 35 Highway.

The hands-on experience has been maintained in the 2016 Jeep Patriot given that it also packs a 5-Speen manual transmission. The SUV is a Front Wheel Drive similar to the Mazda CX-5. The vehicle suspension features a four-wheel independent design doubled up with stabilizing tweaks for the front and rear wheels.

Besides an exquisite looking interior, the Jeep Patriot 2016 model will still rock the same features for convenient driving. It comes with cruise control on the steering wheel, which is also tilt-adjustable to the driver’s level. The front and rear doors come with storage pockets and cup holders to avoid spills when having a drink on the go. Addition features for comfortable cruising include:

The wheel quality used on the 2015 model has been maintained in the 2016 Jeep Patriot. It spots high-grade steel wheels that hold 16 x 6.5 inch tires. The tires are P205/7OR16 models and are designed for all seasons. Two spare tires are offered on purchase—an inside mounted spare as well as a temporary spare.

Given it’s a Sport SUV that will be cruising at top speeds, the Jeep Patriot 2016 definitely has to come with safety guards to protect against any mishap on the road. It is fitted with 4-wheel ABS brakes reinforced with emergency braking assist. The front disc and rear drum are well ventilated to ensure your brakes don’t overheat, hence cutting down the effects of wear and tear.

The interior is surrounded with safety airbags on the front, rear and side mounts. For child safety, the Jeep is fitted with seat anchors and safety locks on rear doors. While in motion, the Jeep Patriot 2016 has a built-in stability and traction control feature, to keep the car steady despite the road conditions. A digital tire pressure monitoring system is included as well.

Put both SUVs side by side and the Jeep Patriot 2016 takes home the price for being quite affordable. The average market rate for the Patriot will be $18,200 which is such a relief compared to the Mazda CX-5 2016 that will retail for $21,800 on the lowest. With a few thousand dollars slashed, the Jeep Patriot still packs most of the specs found on the Mazda.

10) Easy Maneuverability on the Road

With a compact exterior, the Jeep Patriot is quite easy to maneuver in traffic or pack in tight spots. An electro-chromatic inside rear view mirror and dual vanity mirrors gives you the best angles possible on the road.

For the Jeep Patriot fanatic who was looking forward for something new, this may come as a huge disappointment. The MPG, Engine Performance and a lot other specs found in the 2015 model are still maintained in the 2016 model.

As one would have wanted the 2016 Jeep Patriot to be an All 4 Wheel drive SUV, the truth is the exact opposite. Featuring the same Front Wheel Drive transmission as its predecessor, it is sad that this sleek SUV cannot offer the same performance off-road.

Again for the buyers who were hoping for different aesthetics in the new model, this is another disappointment. Body design and exterior colors have both been maintained—the only consolation is the additional color for the interior.