2017 Jeep Cherokee Pros vs Cons. Should You Buy? 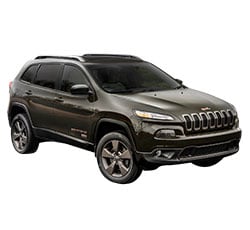 Should You Buy a 2017 Jeep Cherokee? Here Are Some Reasons For and Against

Not to be confused with the larger Grand Cherokee, the Jeep Cherokee has become one of the top options in the small crossover segment. Its family-friendly design and edgy styling has attracted many car shoppers. If you have an adventurous spirit, check out the rugged Trailhawk model. Although the Cherokee is not the sportiest option in the class, its steering system is quite precise.

Aside from the base trim, all versions of the 2017 Cherokee now feature HID headlights. Jeep also offers a 75th Anniversary package, which gives the 2017 model a special appearance.

Because of the crossover’s overall efficiency, you can drive it every day without spending a lot of money on fuel. If you stick with the base four-cylinder engine, you can expect to get 21 mpg in the city and 30 mpg on the highway. Amazingly, the stronger V-6 engine still manages to return 29 mpg on the open road.

If the standard four-cylinder engine fails to satisfy you, step up to the beefy V-6 engine. It churns out a solid 271 horsepower and 239 foot-pounds of torque. Not only does the engine significantly improve the crossover’s acceleration, but it also rewards you with enhanced towing capabilities. The V-6 model can haul up to 4,500 pounds.

The 2017 Cherokee comes equipped with an impressive suspension system. Whether you are puttering around town or charging down the freeway, you can look forward to experiencing the crossover’s comfortable ride. Your passengers will love how well the suspension absorbs bumpy roads. It is a good alternative to a family sedan.

Regarding ruggedness, the 2017 Cherokee Trailhawk stands near the top of its class. A dynamic Active Drive II 4WD system helps you to conquer challenging terrain. The rugged crossover also benefits from a raised suspension. Meanwhile, skid plates provide an extra barrier of protection against rocks and tree stumps. Some of the other enhancements consist of all-terrain tires, a locking differential, and tow hooks.

The Cherokee’s unique front fascia helps separate it from the typical crossover. One of the SUV’s most noticeable styling cues is its extremely narrow headlamps. LED running lights come standard. Featuring a special set of 18-inch bronze wheels and matching the exterior trim, the 75th Anniversary package makes the Jeep Cherokee look even more striking. Some of the standout paint hues include diamond black, deep cherry red and hydro blue.

Budget-minded car shoppers should consider the base 2017 Jeep Cherokee. Jeep lists the crossover’s starting price at $24,000. The standard four-cylinder engine offers just enough performance to keep you fulfilled. Some of the standard features include a 5.0-inch touch-screen display, an SD card reader, and Bluetooth technology.

If you are accustomed to experiencing harsh winters, the 2017 Jeep Cherokee deserves some serious consideration. Its optional 4WD system helps you overcome snowy weather. When decreased traction is detected, the 4WD immediately activates itself. The crossover’s respectable ground clearance also gives you a big advantage in deep snow.

8. Perfect Amount of Room for Families

Families are destined to fall in love with the Cherokee’s spacious design. The crossover provides an outstanding amount of legroom in the back. Your passengers also have the ability to recline their seats. While the Jeep Cherokee is not a large SUV, it still offers more than enough cargo space for most drivers.

There are plenty of components to keep technology lovers happy. The Uconnect infotainment system has received high marks for its user-friendly interface. Smartphone integration is yet another valuable feature. Jeep also offers a premium sound system, which includes a bass-pumping subwoofer. Some of the other options consist of Siri Eyes Free, navigation and a more advanced gauge cluster.

The 2017 Jeep Cherokee offers a commendable number of safety innovations. Even the base Sport model can be equipped with a rear-view camera. Among the crossover’s most significant safety technologies is automatic emergency braking. The system constantly scans the road for large obstacles. Adaptive cruise control and an automated parking system are offered as well.

Reasons Not to Buy a 2017 Jeep Cherokee – The Cons

While the 2017 Jeep Cherokee is not an unsafe vehicle, it only earned a four-star safety rating. Some of its key competitors offer a bit better overall crash protection. This could be a factor for some car shoppers.

2. Base Engine Sacrifices Some Performance

Don't expect the base engine to create a great deal of excitement. Although the four cylinder's power is unlikely to be a deal breaker for most buyers, the V-6 engine is noticeably more potent. Furthermore, you won't be able to tow more than 2,000 pounds.

3. Some Trims May Be Beyond Your Budget

The Jeep Cherokee Overland is the most luxurious model in the lineup. Be prepared to spend just shy of $35,000. Meanwhile, the rugged Trailhawk model has an MSRP of $32,000.