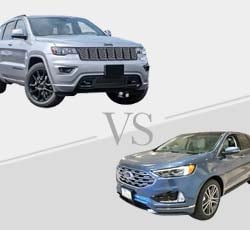 2019 Grand Cherokee vs Edge - How do they stack up? Which is Better?

Those in the market for a new SUV will likely have a tough time making their final decision. The market is certainly nothing short of saturated right now, and it seems like more SUVs are joining the fray as time goes on.

The Ford Edge has been around since 2007, and the Jeep Grand Cherokee stems all the way back to 1993. There have been a lot of changes made to these vehicles over time, and their 2019 line-ups show this. They both have cozy, modern interiors loaded with high-tech gadgets.

But which vehicle is better than the other? Does one present buyers with a better deal? It is time to get down to business and compare the 2019 Jeep Grand Cherokee against the 2019 Ford Edge.

The 2019 Jeep Cherokee is part of a generation that started back in 2011. After eight years, one would reasonably think that this vehicle would be outdated and dull, but they would be wrong. The new Grand Cherokee has a 3.6-L V6 engine equipped on its base trim, the Laredo. This engine produces 295 hp and 260 lb-ft of torque. It gets paired up with an 8-speed automatic in order to round out the transmission.

The Limited trim level has a more powerful V6 engine available as an option, This 3.0-L turbocharged engine can muster up 240 hp and 420 lb-ft of torque. There is also an option for a 5.7-L V8 engine that generates 360 hp and 390 lb-ft of torque. If that is not enough, there is a 6.4-L V8 on the SRT trim that gets an impressive 475 hp and 470 lb-ft of torque. Buyers can even go a step beyond that with the Trackhawk, which gets a 6.2-L V8 with 707 hp and 645 lb-ft of torque. It goes without saying that the Jeep Grand Cherokee has a lot of power.

So, how does the 2019 Ford Edge stack up? The SE, SEL, and Titanium trim levels all come with a standard 2.0-L 4-cylinder EcoBoost engine that generates 250 hp and 280 lb-ft of torque. It's not powerful, but it does offer more in the way of fuel efficiency. All-wheel drive is optional, otherwise the vehicle comes with front-wheel drive. An 8-speed automatic transmission also comes equipped.

A strong powertrain is not the only factor that impacts a vehicle's drivability. There are many other elements that come into play, such as solid brakes, plush seats, a plethora of technology, and a good amount of cargo space. Also, since these are SUVs, it is important to consider which one offers the better off-roading, hauling, and towing capabilities.

The 2019 Ford Edge is up first. The Edge's new 8-speed automatic transmission has much better gear selection than the previous 6-speed, but the responses seem a little bit sluggish for a new 8-speed. Steering and handling, however, feel very predictable and well-mannered. The drive is not terribly exciting, but it feels concise. The steering is weighted well, but the front wheels don't always feel like they are gripping the road well. The brake pedal has a soft feel to it, but the Edge can make a panic stop from 60 mph in about 119 feet.

Comfort is where Ford really gets things right on the Edge. The leather Ford uses is incredibly soft and smooth, and the seats themselves are well-padded. There is plenty of lateral and lumbar comfort available for the driver, and the reclining rear seat is a huge bonus for passengers. The cabin is virtually soundproof, but the ride quality suffers due to the vehicle struggling to absorb smaller bumps in the road. It handles moderately sized bumps just fine but cannot smooth out the little ones, which occupants are going to feel. It makes for quite the busy ride.

As for how the cabin is set up, most of the controls make sense, but the climate control functions are not exactly user-friendly. Also, the buttons mounted on the steering wheel could use some revision as it is easy to accidentally press the wrong one. Trying to find the right driving position is simple though since the driver's seat has plenty of adjustability, and there is plenty of space up front and in the rear. Even taller adults will not have to duck their heads down or crunch their legs together.

There are some issues with visibility. The jutting hood corners, thick roof pillars, and bulky side mirrors make frontal and side visibility somewhat difficult, but the tall rear window gives a decent amount of sight out the back. Also, there are some cheap-looking materials inside of the cabin that make the higher trim levels feel kind of bland.

Some of the small item storage areas inside of the cabin feel a bit smaller than they should be, which proves to be another minor issue for some people. While the 60/40 split-folding rear seats do not fold down flat, the amount of cargo space feels more than sufficient. With all seats in place, there is 39.2 cubic feet of cargo space.

Technology is another strong suit for the Edge, as it benefits from Ford's Sync 3 system. While the Sync 3 is better than quite a few competitors, it is starting to feel slightly outdated. However, the touchscreen's graphics are crystal clear, and there are two USB fronts available up front for the driver and passenger to share. Smartphone app integration comes standard with Apple CarPlay and Android Auto, and using voice recognition software from a cellphone is somewhat easier than the built-in software.

Now, how does the 2019 Jeep Grand Cherokee fare against the Edge? For starters, if buyers want something exciting, they will have to skip past the base V6 engine. The V8 option on the lower trim levels is a much better bet, as the V6 only goes from 0 to 60 mph in 8 seconds. The more powerful engines put forth much better acceleration for midsize SUVs. The Grand Cherokee's weight is what holds it back, but it does lend itself a bit to the vehicle's off-roading capabilities, which are much stronger than the Edge's (especially on the Trailhawk).

The Grand Cherokee's cabin is not altogether as inviting as the Edge's, either. It does stay pretty well muted in most circumstances, but the engine will roar and rumble when put into full throttle. The seats are padded quite well, but their heating and ventilating functions are not all that helpful.

Also, there is optional air suspension, but it is not exactly impressive. In fact, it is kind of a let-down. It makes it more difficult for the vehicle to absorb smaller bumps in the road, and, when taken out on the highway, makes the Grand Cherokee feel way too light and float-y. Mid-corner bumps are also completely obnoxious since the optional suspension has trouble smoothing them over. The standard suspension is the better system and does not cost as much.

The Grand Cherokee does have a decent interior design, lending a lot of spaciousness to both front and rear seat occupants. Taller adults can fit into the rear without a problem. The driver's seat is set high, but there are a bunch of options for adjusting it so that drivers can find a good position within the cockpit. Most of the controls are easy for users to figure out and are placed within reach of the driver's fingertips. Unfortunately, the driver's visibility is hampered by thick front roof pillars that make it difficult to see while winding through turns.

The Jeep Grand Cherokee should be a Goliath in terms of utility, but it has some setbacks. It does not have as much cargo space as some of its top competitors, and there is not a lot in the way of small item storage areas. However, all of the trims have decent towing capacities. The V6 can tow up to 6,200 pounds while the V8s can go up to 7,200 pounds.

For the most part, the Jeep Grand Cherokee has functional technology. The Unconnect system works well, and the optional 19-speaker Harman Kardon sound system is truly superb. This is definitely one of the highlights of this vehicle.

Overall, the revamped Ford Edge gets the edge over the Jeep Grand Cherokee based on its ride quality and comfort.

Safety is a huge deciding factor when buying a new vehicle. That's why Ford and Jeep chock their vehicles full of the latest safety features. But crash tests also matter. So, which vehicle has the most in terms of safety?

The 2019 Jeep Grand Cherokee has everything from lane departure warning to blind spot monitoring. The National Highway Transportation Safety Administration (otherwise known as their acronym, NHTSA) has not yet fully rated the Jeep Grand Cherokee, but the Rollover portion was given an unimpressive 3/5 stars, and they noted that there was a whopping 20.4% risk of rolling over. The Insurance Institute of Highway Safety (IIHS) did give the Grand Cherokee 'good' ratings on all of its tests.

The 2019 Ford Edge is likewise equipped with a ton of helpful safety features. The driver aids actually work quite well, unlike the Grand Cherokee's, which are sometimes too sensitive. The Edge has standard blind spot monitoring, lane keep assist, and automatic emergency braking.

Additionally, the Edge has much better safety ratings from NHTSA, who gave the vehicle 5/5 overall stars. The Rollover test got an overall 4/5 stars and only had a 15.5% risk of a rollover. The IIHS also gave the Edge all 'good' ratings on the crash tests it conducted.

Unless you absolutely need a good off-roader, the 2019 Ford Edge is the better buy. While it still does not compete with some of the other midsize SUVs on the market, it offers a cozy interior space and good array of standard infotainment and safety features.

Save Money on a 2019 Jeep Grand Cherokee:
Are you Shopping for a New Vehicle? Find the Best Deals with "Free - No Hassle" Prices Quotes.