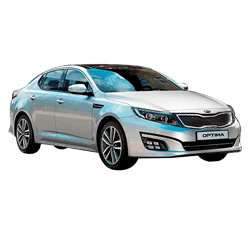 The generation of Kia Optimas are mid-sized top-safety picked sedans that are fun to drive, dependable, trendy and stylish.

The 2014 Kia Optima has been optimized just enough to stand in a class of its own without losing its signature look. The new Kia Optima has a mid-cycle revamp that only slightly modifies its attractive wrapper, which is still unique among mid-size sedan models like the 2014 Mazda 6 and the new Ford Fusion.

In fact, changes are mostly limited to an edgier looking front-end, modified rear, and some new trims, with new LED fog lamps and LED lighting that are featured on some vehicles in the model line. The interior of the new Optima doesn't create the 'wow' factor as before. Instead, it has a cockpit with a minimalist, classy look comparable to the interiors of Audi's just a few years ago, with a broad rectangular bank of controls tailored toward the driver. Also included on the 2014 Kia optima is:

• New TFT instrument-panel and infotainment displays surrounded by a few upgraded trims and an air-conditioned glove box for cooling drinks.

•The new Optima has an eight-inch navigation and telematics system and includes a UVO eServices suite powered by the driver's synced smartphone. It has eight-speaker Infinity sound, SiriusXM satellite radio and SiriusXM Traffic plus HD Radio.

•From the exterior, the front airdam is slightly narrower and taller in appearance; this is a noticeable change from the wide 'grin' featured on the previous Optima. Some versions also come with a chrome strip bordering the side rocker-panel area. What remains the same is the sedan's athletic posture, along with eye-catching wheel designs.

Just like most other sedans in this market, the 2014 Kia Optima is offered in several trims of which all include a four-cylinder engine. It is standard for Optimas to have a 2.4-liter four-cylinder engine with direct injection and 200-horsepower, on all models with the exception of the SX.

Acceleration is slightly sluggish when its full potential is needed, but the Optima does pick up well at medium revs and performs well with six-speed automatic transmission. For those looking for more powerful V-6 performance, they will get plenty of throttle from the sporty SX model with its paddle-shifters for the automatic model along with its 274-hp turbocharged 2.0-liter four-cylinder engine.

1) Good value for the money

6) The steering wheel impresses with its girth, controls layout, and appearance.

8) The center stack is ergonomically slanted towards the driver, offering a feeling of comfort when passengers need enter the car.

9) The automatic transmission voluntarily upshifs at the peak rpm range while in manual mode.

10) The Optima has a conservative and well proportioned Euro design.

11) The Optima has a sturdy tuned suspension with good body control, that feels balanced on a winding road.

13) Compared to the Honda Accord and the Toyota Camry, the new Optima has more aggressive acceleration with less effort done by the driver.

14) On all models except the LX, sensors for rear parking, and a Blind Spot Detection System are now available.

16) The Optima has front seats that can be cooled. In addition, both front and rear seats can be heated.

20) In car crash tests, the frontal and side impact are good; and the frontal, side, rear, and roof strength are acceptable.

22) The Optima is wide enough to fit three comfortably.

24) Optima to be a nice blend of modern/tech and the austere.

25) Although Acura has greater cachet and brand image than Kia, Customers who bought the SX Limited noticed that their monthly payment was about $40 lower than it was for the Acura TL with a nearly identical sticker price of $36,000.

27) The Acura TL has extremely busy, button-heavy dashboards whereas Kia Optima has a simple dash layout.

28) The trim on the SX Limited is slightly fancier compared to other mid-size sedan trims.

29) Acura TL requires fuel premium unleaded, but on the Kia Optima, the manufacturer only calls for regular unleaded which translates to more significant savings.

30) Fuel economy, in mixed driving, to be on par with a V6 of comparable power about 24 MPG in combined driving.

32) The SX's powertrain performance is very strong when it hits full peak.

33) The SX Limited has the 274 HP turbocharged four-cylinder engine, which is more than sufficiently powerful, reaching 60MPH in 6.1 seconds.

Reasons you may not want to buy a 2014 Kia Optima

1) Tough getting in and out of back seats due to the roofline.
2) Slightly noisier interior than top rivals
3) Could use more padding in its leather seats
4) The non-turbocharged engine is a bit weak.
5) Kia has a small overlap frontal.
6) Compared to the Acura TL, there's a hint of turbo lag with the Kia.

With the exception of a small overlap frontal, the 2014 Kia Optima gets a five-star rating overall by offering top-level features for its value, particularly at the base level. The sporty SX models and now the SX-L (Limited) model could be both typed as luxury models just by looking at the list of features they both have.

• 2018 Kia Optima trim levels. What you get with each trim configuration.