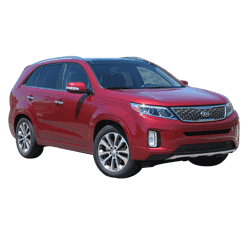 For motorists in the market for a new vehicle, choosing a model that's suited to their needs can present a considerable challenge. For new and growing families that need a safe, reliable car, a crossover just might be the answer they've been searching for. Crossover utility vehicles (CUVs) are automobiles that take some of the best features of a sport-utility vehicle and incorporate key elements of a standard passenger vehicle like a station wagon or a mini-van. The crossover is built to be hardier than the average hatchback, but still sportier and cooler than a traditional mini-van.

In this article, we'll be taking an in-depth look at the 2014 Kia Sorento crossover and offer some pros and cons to driving and owning this CUV. We'll be reviewing Kia's updates to the 2014 edition and considering all the benefits and features that drivers might find worthwhile.

According to the designers at Kia, less than 20 percent of the parts from the 2013 Sorento have been carried over to act as the foundation for the 2014 model. With this updated model, the designers have made some subtle changes to the overall look of the car and also added some handy features. At the front of the Sorento, they've incorporated LED daytime running lights and fog lights, while at the back, they've reoriented the tail lights for a more attractive silhouette.

The changes to the car's exterior aren't dramatic enough to be immediately noticeable, but they might make a difference for someone with a very particular sense of style. However, word has it that the designers at Kia are planning to overhaul the Sorento's exteriors completely sometime soon, if the look of this particular model doesn't appeal.

The 2014 Sorento also boasts some improvements under the hood, including a 3.3 liter V6 engine that provides surprisingly powerful acceleration. The engineers at Kia have done their best to improve the car's integrity by stiffening its chassis by 18 percent. They've also improved the car's suspension to more effectively absorb shocks and vibrations while driving. Those changes culminate in a smoother, more comfortable ride and more responsive handling.

The 2014 Sorento also introduces an electric power steering feature so drivers can customize the steering to suit their driving style and preferences. Another significant change can be found inside the car, with the updated central console in the front seat sporting a larger touch screen. Other helpful design choices include manual shades for the rear side windows, a programmable lift gate, and an updated panoramic window complete with a retractable shade.

For drivers with more elegant tastes, they can choose the SXL model of the 2014 Sorento, which offers many luxurious features. The Sorento SXL is available in black, silver or pearlescent white only and includes Nappa leather seats, dark wood trim, and heated second-row seats.

Although the 3.3 liter V5 engine is a significant improvement over the engine in the 2013 Sorento, the 2014 version can only manage a disappointing 18 miles per gallon in the city and 25 miles per gallon on the highway. In addition, the capacity of the car's fuel tank has also shrunk by half a gallon. Although the central console provides essential vehicle information, audio system access and navigation assistance, it's impossible to customize the screen's user interface. Although the SXL model of the Sorento boasts many upscale interior options, the package also adds 19-inch chrome wheels, which seem out of place. The SXL package also includes red brake calipers, which undermine the more sophisticated aesthetics of the Limited model.

1. Family-first and family-friendly -- This edition of the Sorento features second and third-row seating that's perfect for running errands and taking kids to baseball or ballet practice. The front seat also features latch anchors that are built into the seat's brackets to allow proper installation of a child's rear-facing car seat.

2. Third row seat options -- Although this seat is intended for smaller occupants or children, it boasts a separate control that allows third-seat riders to customize the rear HVAC fan's speed to their liking.

3. Interior/exterior improvements -- Designers have done their best to refine the functions and features that worked in the previous model while making subtle changes to the vehicle's aesthetics overall.

4. Electric power-steering -- The FlexSteer feature is found in many Hyundai and Kia models and has three pre-programmed settings, including Normal, Comfort and Sport steering. This makes it easy to select the amount of steering assistance the system provides.

6. UVO eSERVICES -- This innovative infotainment system allows drivers to connect to a suite of 100% free services with their Bluetooth-enabled smartphone. The suite of services includes Parking Minder, which saves the location of your parking spot to your smartphone's app, vehicle diagnostics and roadside assistance.

7. Powerful engine -- This vehicle has an impressive V6 engine that gives this heavier crossover a surprising boost.

8. Roomy interior -- The 2014 Sorento has improved on its already generous seating by adding an extra 1.2 inches of legroom for second seat riders. Even exceptionally tall drivers have an easy time getting in and out of the car.

9. Quiet, smooth ride -- The car features improved shock absorption and has a refined design that either reduces or eliminates wind noise and road noise.

10. SX Limited package -- For drivers who can afford the premium pricing, the SXL's high-quality interior options and practical features like heated first- and second-row seats are something to consider.

The 2014 Kia Sorento does have some weak spots, including poor gas mileage, finicky gear-shifting and occasional jerky steering. However, the wealth of both standard and optional features combined with superior safety and infotainment functionality make this a sound investment for growing families.

• 2018 Kia Sorento trim levels. What you get with each trim configuration.