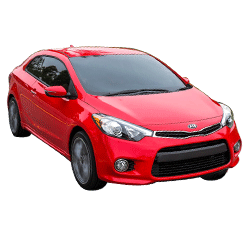 Should You Buy a 2015 Kia Forte? Here Are Some Reasons For and Against

Kia has made great strides since its inception in 1944 as a manufacturer of steel tubing and bicycle parts by hand. The company later expanded to make complete bicycles which were followed by motorcycles, trucks and cars with its first automotive assembly plant opening in 1974.

Since then, Kia vehicles have turned out to be one of the most sought-after, budget friendly lines available worldwide. With its sleek, modern design and exceptional value, the notable Kia Forte provides plenty of bang for your buck.

With a U.S. News and World Report overall ranking of #9 out of 41 Affordable Small Cars, the 2015 Kia Forte offers outstanding pricing, great gas mileage and more options than ever before. The latest upgrades include a new style with a wider, longer body that creates more passenger space, two additional, sporty models to choose from, and an improved federal frontal impact score, up from its previous 2014 rating. The following is a list of pros and cons based on both critic and consumer reviews:

1 The Price Is Right

With an MSRP of $15,980 for the basic model, the Kia Forte costs considerably less than its competitors such as the Volkswagen Golf, Ford Focus, Mazda 3 or the Honda Fit.

Kia is well-known for its impressive fuel economy and the new Forte is no exception with its earning of an EPA-estimated 26 miles per gallon in the city and 39 on the highway.

3 Plenty of High-Tech Features to Choose From

The car’s cabin is furnished with premium plastics and otherwise above-average quality of materials for its class. Consumers have commended its modern design that competes with sportier, more expensive vehicles. The seats are comfortable with their thick, supportive cushions.

5 Its Redesigned Infotainment System Provides the Latest Gadgets and Services

Kia’s UVO infotainment system with Smartphone-connected links to Google maps is another innovative option for buyers. Critics rave about the modern, well-designed control layout. It is easy to operate with a 4.3” touch screen and a display with large, straightforward buttons placed in a logical format. The system can also be upgraded to include additional features.

6 Lots of Room for Passengers and Cargo

The Forte has an abundance of legroom and cargo space (14.9 cubic feet in the sedan and 23.2 in the hatchback) compared to other vehicles in its class. Even the smaller, two-door model provides more space than one might expect.

The new design makes for optimal visibility. When combined with the rearview camera and auto-dimming rearview mirror, blind spots virtually become a thing of the past.

There are three engines to choose from. The sedan comes standard with a 1.8-liter four-cylinder engine and manual transmission; however, automatic transmission is available. The Forte EX runs on a strong 2.0-liter, 173hp, 154 pound-feet torque engine while the LX has the standard 1.8-liter engine generating 145hp and 130 lb-ft of torque. The SX versions of the Koup and the Forte 5 with the optional turbocharged 1.6-liter engine boasts 201hp and 195 lb-ft of torque which has been argued as one of the most powerful in its class. Acceleration rates from zero to 60mph range between 7.0 and 8.1 seconds, which is also an excellent score.

9 Numerous Safety Features Are Standard For All Models

All 2015 Kia Fortes are equipped with anti-lock disc brakes, traction and stability control, front side airbags and side curtain airbags. The elective UVO telematics service incorporates roadside assistance, emergency crash notification and secondary driver monitoring features which include parental notifications for teenagers who exceed curfew, speed limits and rules that state where the vehicle is allowed to travel. Edmunds brake testing resulted in a higher-than-average score for its sector.

10 Made in the United States

Headquartered in Seoul, Korea, Kia Motors partnered with Ford in 1992 and began selling cars in North America. Success in sales led to the implementation of Kia Motors Manufacturing Georgia in 2009 which employs 3,000 workers with 7,500 more at suppliers that are close by. That means over 10,000 jobs and another good reason to buy for those who want to help bolster the American economy.

Safety rankings are slightly lower than its counterparts. Although its frontal impact rating has improved to four stars, its small overlap rating is only ‘marginal.’

Many reviewers have complained about a lack of steering feel and the body motion associated with rough pavement. Also, the engine can be rather noisy.

The paint on this car seems to scratch easily and the sheet metal used on the body is thin.

Naturally, as with any vehicle, the Kia Forte does have some shortcomings. Still, for the price, its overall performance, style and features deserve careful consideration from potential buyers looking to own a dependable yet affordable car. Kia vehicles have become true competitors in the automobile industry and owners are very satisfied with their decision and say that they would buy another Kia in the future.