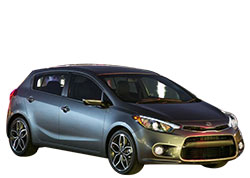 Many people are looking for affordable compact cars due to the lower price tag, better fuel economy, and range of features available. One vehicle that fits into the price-friendly compact car category is the 2016 Kia Forte 5-Door.

This model has been around since 2010, one year after the standard Kia Forte, and it has made a name for itself as a fun, quality, affordable car. For those who haven't considered one before, then it is time to look at reasons why they would want to purchase the car along with a few reasons that might make them think twice.

To begin, it is important to consider what Kia has added in 2016. New upgrades can make a vehicle even more appealing. New for 2016 is a remote keyless entry. This feature has been available in the past as an upgrade, which meant it would cost more. Now, though, it is standard on all Kia Forte models.

The Kia Forte 5-Door has a new LX version available in 2016. This is a more affordable, toned down model that will certainly appeal to those on a budget. Kia has also added a few new color options, wheel choices, and audio systems available on 2016 models.

In addition to the new features available in this model, there are plenty of other reasons to choose the 2016 Kia Forte 5-Door. Here, we will explore the top ten reasons why this could be a good purchase.

One of the main reasons to purchase a compact car would be the price point. Many people are looking for affordability for their next vehicle, and this is one area where the Kia Forte will not let the buyer down.

When purchasing a new vehicle, the warranty does matter. Many buyers assume that all manufacturer warranties are the same, but that isn't the case. In fact, some are much better than others. The 2016 Kia Forte 5-Door comes with generous coverage with a six year or 60,000 miles basic warranty. The power train comes with a 10 year, 100,000 mile warranty.

3. Back Seat and Cargo Space

Another reason to consider the 2016 Kia Forte 5-Door would be space. Whether a driver is just going to buy groceries or they want to go on an adventure, cargo space is going to matter. The cargo volume in the Kia Forte5 is 23.2 cubic feet, which is much bigger than comparable competition. Additionally, user reviews continue to indicate that the backseat is roomy and comfortable, which is a feature hard to find on compact cars.

Fuel economy is always a concern, even when gas prices are lower. That's because we all know that the prices could skyrocket at any given moment. Another great reason to buy the 2016 Kia Forte 5-Door would be the generous fuel economy. Both the LX and EX versions provide 25 MPG in the city and 33 MPG on the highway.

The fuel economy on the SX version suffers slightly at 21 MPG in the city and 29 MPG on the highway due to the turbocharged engine.

The 2016 Kia Forte 5-Door offers a number of standard features, which do not add anything extra to the purchase price. For example, even the most basic model includes a six-way adjustable seat for the driver, the remote keyless entry as mentioned, and projector beam headlights.

And, if one purchases the mid-range or higher end Kia Forte5, they can expect even more standard features. For example, the mid-range features a selectable steering assistant (more on this later) and positioning headlights.

Safety is almost always a concern to any driver, so another good reason to buy this vehicle would be high safety ratings. The NHTSA gave stellar safety ratings, including:

One feature that users continue to prefer on the 2016 Kia Forte 5-Door is the enhanced visibility. Thanks to larger windows and the build of the car, it is possible to see all around, and that can make it easier to avoid a collision.

Those buyers who want something different will enjoy the quirky little details that make the Forte stand out. For example, the dashboard has a distinctive wave pattern. While these details may not add to performance, power or safety, they do make the car unique.

The very basic engine (2.0 liter) allows for an acceleration of 60 MPH in 7.4 seconds. The turbo charged engine is only faster.

These days, technology in a vehicle is a must, and the 2016 Kia Forte 5-Door has plenty to offer including steering wheel controls for the radio, hands-free system, and cruise control. A rear camera display is standard in all models.

Obviously, there are also always reasons a driver may not like a certain vehicle, and that's true of the 2016 Kia Forte 5-Door as well. Let's look at a few reasons it may not be the car for everyone.

Many users and reviewers have indicated the handling of the vehicle is good but boring. It works when it needs to, but there are no frills to it.

The engine has been described as noisy and loud when driving too. While the acceleration may be a positive feature, the noise could be somewhat of a distraction.

As mentioned previously, the Kia Forte5 has a steering assistance system, which seems like a positive feature. However, some users have found it difficult to use and nearly impossible to perfect for the best driving experience.

One of the biggest ways the Kia Forte5 outshines the competition is cargo space. The 23.2 cubic feet available in this model is much better than the competition, which is as follows:

Additionally, the Kia Forte5 offers satellite radio as a standard feature, which is not available standard on the Toyota Corolla, Honda Civic, or Ford Focus.