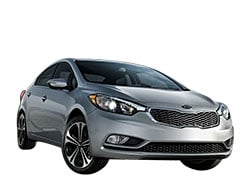 Should You Buy a 2016 Kia Forte? Here are the Pros and Cons

Over the past few years, the Kia Forte has become a top contender in the compact sedan segment. The Forte’s family-friendly interior and modern styling make it an excellent option. While the base model is a solid bargain, the EX trim brings even more style and luxuriousness to the table. Furthermore, the 2016 Kia Forte has been stamped with a five-star safety rating.

The sedan’s performance and styling remains the same. However, the available trim packages are just a tad bit different.

With a total output of 145 horsepower and 130 pound-feet of torque, the sedan’s base four-cylinder engine is quite energetic. Drivers can accelerate quickly if needed. The engine’s efficient design helps promote good gas mileage. When traveling on the highway, drivers can expect to get an impressive 39 mpg on the highway.

The EX trim’s larger 2.0-liter engine is especially responsive. Direct-injection technology enables the four-cylinder engine to produce an entertaining 173 horsepower and 154 pound-feet of torque. The EX version can hit 60 mph in about 7.8 seconds. This is a very impressive time for a budget-friendly sedan. Gas mileage stands at an efficient 35 mpg on the open road.

While some drivers may prefer the base model’s manual gearbox, the six-speed automatic transmission is just as fun. When attempting to merge onto the freeway, the transmission quickly shifts down to a lower gear. The transmission’s smooth performance makes the 2016 Kia Forte a joy to drive.

On the road, the 2016 Kia Forte feels very stable. Although a sports-tuned suspension is unavailable, the sedan still delivers secure handling. The EX trim also comes standard with a FlexSteer steering system. While the Comfort setting is great for long-distance road trips, the Sport mode will provide the driver with more confidence on curvy roads.

Because of its roomy design, the 2016 Kia Forte will appeal to a lot of families. Unlike some of its rivals, the Forte welcomes its passengers to a comfortable backseat. Tall drivers will also easily fit behind the wheel. With a cargo capacity of almost 15 cubic feet, the small sedan can fit several travel bags in its trunk.

Prices for the 2016 Kia Forte start at $15,990. The sedan’s affordable price tag makes it a very attractive option for some drivers. However, a fully-loaded EX model can still be purchased for less than $22,000. The Forte’s 100,000-mile powertrain warranty will help owners to save money as well. Furthermore, the sedan does not require any costly maintenance.

The base LX model comes equipped with quite a few useful features, including satellite radio and a trip computer. However, the optional Popular package equips the base model with a lot more goodies. Drivers will surely like the touch-screen audio system. Some of the other additions include a rear-view camera, cruise control, and upgraded upholstery.

From a safety standpoint, the 2016 Kia Forte will prove to be a very good choice. The sedan earned a five-star overall safety rating. Because of the car’s impressive crash test scores, its cost of insurance will be very affordable. If desired, buyers can opt for an Uvo eServices system. Not only does the Uvo system offer a constant link to roadside assistance, but it also allows parents to monitor their child’s driving habits.

When traveling in below-freezing temperatures, the available steering wheel will keep the driver’s hands nice and warm. Kia also offers heated seats for the front and rear passengers. [an error occurred while processing this directive]

1) Lags Behind in Fuel Economy

While the 2016 Kia Forte is far from being a thirsty automobile, some of its rivals offer better overall fuel economy. For example, both the new Honda Civic and the Mazda3 sedan offer models that surpass 40 mpg.

Kia chose not to offer a manual gearbox for the EX trim. This could be a disappointment for some people. If they want a traditional stick-shift gearbox, buyers must settle for the less powerful LX trim.

All versions of the new Forte come equipped with the same suspension system. Economy sedans such as the Dodge Dart provide a sports-tuned suspension.

Some of the other options in the compact sedan segment include the Honda Civic, the Toyota Corolla, and the Mazda3 sedan. In comparison to the Mazda3, the Forte’s roomier backseat gives it a key advantage. The new Forte also offers a lot more performance than the Toyota Corolla.

• 2018 Kia Forte trim levels. What you get with each trim configuration.

Compare Local Dealer Prices
Find the Best Deal
Save Thousands on a 2016 Kia Forte! Start Your Own Online Price War