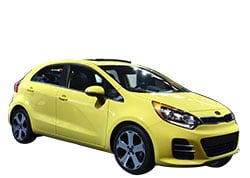 Should You Buy a 2016 Kia Rio? Here are the Pros and Cons

Offering a crisp and trendy European design, the 2016 Kia Rio comes with a feature-packed interior and a fuel-efficient engine. As the fifth-generation model, it has to leap two twin hurdles: First, it has to overcome the lower gas prices, and second, it must improve upon its past to stay ahead of the competition. Compared to some of the larger models, the Rio has never done as well, but that does not mean there are not plenty of reasons to buy one.

One of the first things that people will notice about the 2016 Kia Rio is the throwback details. For example, they have a wonderful climate control system and a large touchscreen display on the high-end model. They will also find a satin-finish around the air vents to make it look exceptional.

With a single engine in the 2016 Kia Rio, the 138-horsepower 1.6-liter is something that is sure to impress. It has a six-speed manual gearbox that comes as a standard for the 2016 Kia Rio. The engine operates on a quiet level, but an individual can punch it for some aggressive driving.

For a small and inexpensive economy-class vehicle, the 2016 Rio handles remarkably well. It would be nice if there were a little more feedback from the steering, but for a vehicle in this class, it performs outstandingly well. No matter what type of driving style that a person might have, this car knows how to stay composed.

One of the biggest reasons that a person might choose the 2016 Kia Rio would be because of the excellent economy. This is a subcompact car, which is known for getting great fuel economy. The powertrains were rated with 31 mpg combined, and the Rio Eco model carries a 1-mpg increase with the city driving.

With the 2016 Kia Rio, people have great front seats that have a long bottom cushion. Also, there is a lot of rearward seat travel, and this makes for comfortable commute if they want to transport one or two people to and from and work. If they choose the sporty Rio SX model, they will have a better seating choice. In the back, however, the seating is less confining than what they have with the Versa Note and Honda Fit.

When looking at the price, buyers receive an impressive amount of features for what they pay. Even the base Rio LX model includes:

If they choose a hatchback, they will also receive 15-inch wheels, steering-wheel audio control and a well-laid-out dashboard. That means that people can use and access controls easily.

Compared to rival hatchbacks, they have 49.8 cubic feet of total cargo space. This has become a solid pick because it has strong engine performance and an inviting cabin. This is an inexpensive hatchback that performs efficiently.

When considering the fact that the average subcompact looks like it is a bargain-basement rental car, people can appreciate the sporty and bold appearance of the 2016 Kia Rio. Both the inside and the outside look great on this vehicle. It's as fun to look at as it is to drive.

With the 2016 Kia Rio, the vehicle has a subtle new front and rear styling, and this vehicle looks similar to the Rio sedan. Kia has played with the visual width, and they styled the front lower bumped. They might seem like small changes, but when an individual sees the changes on an auto show floor, it is a significant change to the appearance.

One of the biggest changes that has happened in 2016 would be the sound-deadening material that gets pumped into the A and B pillars to reduce the amount of vibration, harness and noise qualities.

#1: No Manual in the Hatchback

With the sedan, people had the option of the six-speed manual or the six-speed automatic. Unfortunately, with the 2016 Kia Rio hatchback, they do not have the choice of using manual. As with a lot of the Rios, acceleration has never been a purchasing point. In the refresh, there is exactly what a person might expect from its predecessors on acceleration.

Looking at crash-test ratings, the 2016 Kia Rio performed best at middle-of-the-road when tested for crashes. In federal crash testing, the Kia Rio received four stars in federal crash testing. The impact score was around acceptable. It received a marginal rating for the front crash test, which is only one rank above the bottom rating of poor.

If looking for a quiet riding car, then the 2016 Kia Rio might be the best choice. The advantage of this car is that it costs much less than its competitors at $14,165. Because the 2016 Rio is smaller than the average vehicle, it makes it possible to park it almost anywhere. Also, buyers will also be driving a vehicle with a sporty appearance. The larger front brakes and fog lamps ensure that everything stays in good condition. Should a person choose the SX model, they will also receive an excellent navigation system.

Compare Local Dealer Prices
Find the Best Deal
Save Thousands on a 2016 Kia Rio! Start Your Own Online Price War