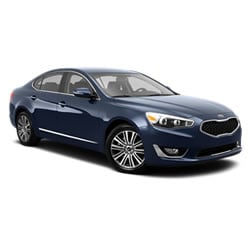 Should You Buy a 2017 Kia Cadenza? Here Are Some Reasons For and Against

Visit Car Clearance Deals, CarsDirect & MotorTrend.
For 2017, Kia has given the Cadenza its first major overhaul in the full-size sedan's three-year history. The 2017 Kia Cadenza offers a whole lot of car for an impressively low price tag. Powerful and luxurious, the Cadenza is not without its problems. For the most part, however, this lively four-door sedan should meet and exceed the expectations of the vast majority of drivers.

The 2017 Cadenza is the second-generation version of this relatively low-selling sedan. Kia is clearly hoping that the many design changes that they implemented will increase its popularity. The updates are thoughtful and include a revised tiger nose design for the grille, which is outfitted with one of two inserts. The suspension has been retuned and now includes new shock absorbers with Amplitude Selective Damping. New for 2017 is also an eight-speed automatic transmission that was built in-house by Kia. Many stylistic updates have been made to the interior as well.

Some of the top reasons to buy the newest Kia Cadenza include:

Previous versions of the Cadenza already had a very quiet cabin. For the latest model year, however, the manufacturer has added more insulation and other touches that make the interior even quieter. When traveling more than 65 miles per hour, a small amount of wind noise is present, but it is barely noticeable.

With all trims including an array of premium options, the 2017 Kia Cadenza offers incredible bang for the buck. The base Premium model has a starting MSRP of around $33,000. A fully loaded Limited model starts in the mid-$40,000s, which is quite a steal when stacked up against similar cars in this class.

The dashboard of the Kia Cadenza has been completely redesigned for this year. It now features a two-tiered design, with the infotainment screen and various gauges along the top tier and control buttons below. The switches, controls, and gauges all boast an upscale look and feel, even in the base Premium model.

Drivers can choose from four different drive modes with the 2017 Cadenza. The system defaults to the Comfort drive mode, and Sport, Smart, and Eco are also available. When different modes are selected, the transmission and steering weight switches to adjust the overall driving dynamics.

The 2017 Kia Cadenza is powered by a 3.3-liter direct-injected V6 engine that gets 290 horsepower and 253 pound-feet of torque. The only available transmission is an eight-speed automatic that was built in-house. Electrically assisted steering further enhances the driving ability of this vehicle, making cornering an absolute breeze.

Crash tests have not yet been performed on the 2017 Kia Cadenza. However, the sedan comes with an array of standard safety features, including nine different airbags and a rearview camera. Several optional safety features are available for the base Premium model, including rear cross traffic alert and blind spot detection. The Technology and SXL trims come standard with automatic emergency braking, lane departure warning, and adaptive cruise control.

All 2017 Cadenzas include the UVO eServices suite of smartphone-based services. Dozens of services are bundled together, including diagnostics assessment, roadside assistance, and parking reminder, which helps drivers quickly locate their vehicles.

For a full-size sedan, the 2017 Kia Cadenza offers a surprising amount of cargo space. Indeed, the trunk offers 16 cubic feet of space, which is downright roomy when compared with many other vehicles in this class. At the same time, the sedan offers plenty of room for passengers. The manufacturer added 0.4 inches of extra legroom and one additional cubic foot of overall space, which is a big plus.

All trim levels of the 2017 Cadenza are loaded with compelling features. Many features that come standard on the base Premium trim are typically optional on other base-level sedans. When paired with the base model's competitive price tag, this is an incredible deal.

Included on the Technology and SXL trims, the adaptive cruise control feature is one of the best on this year's model. Therefore, drivers are advised to upgrade from the Premium model. Adaptive cruise control seamlessly detects slowdowns and other issues, allowing drivers to enjoy an easier and more enjoyable driving experience.

A few reasons to reconsider buying the latest Kia Cadenza include:

When compared with many other full-size sedans, the Cadenza's fuel economy ratings leave something to be desired. The vehicle has earned an EPA fuel economy rating of 23 mpg combined--20 mpg in the city and 28 mpg on the highway. Many sedans in this class do better.

When it works right, the UVO eServices suite is wonderful. Unfortunately, however, it seems to be a bit sluggish at times. It doesn't always respond immediately when accessed via the touchscreen interface, which is a major issue when trying to steer the car down the road.

While the base model of this new sedan is admirably equipped, it still pales in comparison to the two higher trim levels. Given that the higher trims come standard with so many more safety features, including adaptive cruise control, it is easy to see why many drivers would be reluctant to invest in the Premium trim.

As a relatively new offering by Kia, the Cadenza still hasn't quite hit its stride in terms of popularity. However, this roomy four-door sedan gives many luxury crossovers a run for their money, and the latest updates might just push this sedan into more popular territory among a wider array of drivers.