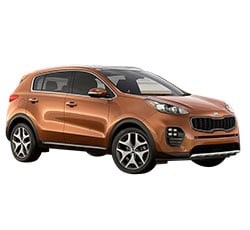 Should You Buy a 2017 Kia Sportage? Here Are Some Reasons For and Against

Visit Car Clearance Deals, CarsDirect & MotorTrend.
Completely redesigned for 2017, the Kia Sportage is now near the head of the class among compact crossover SUVs. While the 2017 Kia Sportage is not without its issues, the redesign has done away with many irksome problems to produce an SUV that appeals just as much to young, single professionals as it does to busy families.

Kia largely went back to the drawing board with its latest incarnation of the Sportage, but a few new touches are especially worth mentioning. Most especially, the backseat is dramatically roomier, making this a real option for on-the-go families. A complete overhaul of the suspension has also created a smoother and more enjoyable driving experience.

The 2017 Kia Sportage has been completely redesigned, breathing new life into Kia's most popular model. Kia clearly listened to feedback from customers here because the upgrades and changes, including a more spacious interior and a drive mode selection feature, have completely transformed this tried-and-true crossover.

Available in three trim levels--LX, EX and SX Turbo--the 2017 Sportage has something for everyone. The base trim is loaded with thoughtful standard features, including rear climate vents, Bluetooth, LED running lights and a 5" touchscreen, which is part of the new UVO3 infotainment system.

Drivers will be pleased with the wide array of standard safety features that are included on the 2017 Kia Sportage. These include traction control, stability control, full-length side curtain airbags, front seat side airbags, a rearview camera, antilock disc brakes and hill-start assist.

For 2017, Kia did a complete overhaul of the Sportage's suspension, which not only improves driving quality but cuts back significantly on road noise too. The manufacturer has also upgraded its materials quality, including the use of higher strength steel, and these steps have also helped to produce a more serene driving experience. Even when flying along the freeway, squeaks, rattles, and other sounds are virtually nonexistent.

The Sportage has long offered somewhat utilitarian aesthetics regarding its interior and cabin, but that all changes in 2017. As part of its complete redesign, the 2017 Kia Sportage's interior, including its dashboard, has been transformed. The leather base trim is a bit basic, but it is still very generous for a base model. The center stack of the 2017 Sportage now leans toward the driver, and the touchscreen interface lends it a high-tech, futuristic feel.

The latest incarnation of the Kia Sportage boasts the UVO3 infotainment system, which stacks up nicely when compared with similar offerings from other manufacturers. For all trim levels, UVO3 offers eServices with 14 telematics services, 8 GB of storage space and support for Android Auto and Apple CarPlay. Navigation is added with the SX trim.

Incredibly, all models of the latest Kia Sportage include drive mode selection, which gives drivers a little more control over how their vehicles operate. Drivers can switch between Normal, Eco and Sport modes. Eco mode is supposed to enhance fuel efficiency while Sport mode gives the Sportage sportier handling.

With the 2017 Kia Sportage, drivers don't necessarily have to upgrade to pricier trims to get the features that they want. Several options packages are available for this vehicle, including the Popular package, which adds heated mirrors, a power driver's seat, roof rails, illuminated vanity mirrors, heated front seats and windshield wiper deicers.

As part of its redesign, the 2017 Kia Sportage has a stylish new exterior. One of the most dramatic changes involves the grille, which is much larger than before and is positioned higher and more vertically than previously. The front fascia has been redesigned as well, and it now allows for steeper approach angles when maneuvering the vehicle off roads.

One of the biggest complaints about previous versions of the Kia Sportage concerned the relative lack of space in the backseat, which made it difficult for families and other larger groups. Fortunately, the manufacturer did something about this, and adults can now sit comfortably in the back without any trouble. The trade-off, it appears, is that cargo space continues to be lacking.

Even the best vehicles have their drawbacks. Three reasons to think twice about buying the 2017 Kia Sportage include:

Given its diminutive size and otherwise forward-thinking design, the 2017 Sportage falls woefully short regarding fuel economy. Models that are equipped with the 2.4-liter, four-cylinder engine, and all-wheel drive get a combined fuel economy of 22 miles per gallon; the Honda CR-V gets 27 MPG, so this is a sore spot.

Although the latest Sportage has improved by leaps and bounds regarding passenger space, it still misses the mark when it comes to cargo capacity. At just 60.1 cubic feet of space with the rear seats folded down, the 2017 Kia Sportage is outshone by many of its nearest competitors, with the RAV4 offering 73.3. Cubic feet and the CR-V offering 70.9 cubic feet.

This last gripe is pretty common among small crossover SUVs: The 2017 Kia Sportage just doesn't have quite enough oomph. Many hoped that the manufacturer would add a bigger, more powerful engine this time around, but that didn't happen. Still, the redesigned suspension, drive mode selection, and other features mitigate this to some extent.

Other than a few relatively minor issues, the 2017 Kia Sportage is now poised to become one of the leading offerings in its class. Most drivers will be pleased with everything that this crossover SUV has to offer.