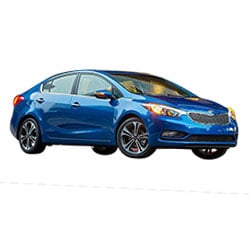 What 2018 Kia Forte Trim Level Should you Buy? What is the Difference Between the Trims?

The Kia Forte is the perfect example of a car taking the old saying to ‘be the best at what you are’ to heart. While the Forte never really exceeds the limitations of its position as a budget compact car, it takes to the role with gusto, offering a comfortable interior, an appealing exterior, and a decent selection of amenities that appeal to a wide range of compact buyers.

The current 2018 Kia Forte represents a small pause in the model’s development and does not differ much from last year’s model. But last year, the Forte underwent a fairly major mid-cycle redesign and is likely to be changed again for 2019 as Kia merges it with its European-only equivalent Kia Ceed.

While the trim lineup for the 2018 Kia Forte is not a particularly difficult one to navigate, it is made slightly more complicated by a number of factors. The Forte comes both in a regular sedan configuration and as a hatchback called Forte5. The two body styles share two trim levels together, but also each offer an exclusive trim that is not available on the other model. The different body types also offer slightly different features on the same trim level, and have different available options packages.

To help buyers make sense of this somewhat confusing setup, this guide goes through each of the four different Forte trim levels, pointing out the differences in features and options both between the different trim levels as well as the different body styles available.

Compare the 2018 Forte LX vs S Trims. What is the difference?

The Forte LX is the entry-level model for both the sedan and hatchback Forte body styles. Inexpensive but nicely put together, the Forte LX comes with all of the basic features that buyers have come to expect from their vehicles. It has power locks and windows, air conditioning, remote keyless entry, Bluetooth, 15-inch wheels, satellite radio, and a USB port.

From there, the features slightly differ between the sedan and hatchback models. The sedans come with a 147-horsepower engine and a manual transmission, while the hatchbacks are all automatic and are powered by a 164-horsepower version of the same 2.0-liter four-cylinder engine. The hatchback LX models are also equipped with power-folding outside mirrors. Sedans have the optional of an automatic transmission upgrade, while the hatchbacks can select an optional Popular Plus package that adds a rearview camera and a 7-inch touchscreen infotainment system that supports Apple CarPlay and Android Auto, as well as 16-inch aluminium alloy wheels.

While the hatchback Forte LX may seem like it is much better equipped than a sedan, the S is a sedan-only model that closes the gap between the two and offers some additional nice features.

The Forte S has all of the same features as the regular LX sedan, as well as an automatic transmission, a rearview camera, and the 7-inch infotainment system with Android Auto and Apple CarPlay as standard equipment. It also has a slightly tuned suspension system and 16-inch alloy wheels.

It is basically a sedan version of the Forte LX hatchback with the Popular Plus package. And speaking of packages, the S has its own exclusive one: the S Technology Package includes a full set of advanced safety features including a forward collision warning system with autonomous emergency braking, a lane departure warning with lane keep assist, a blind spot monitoring system with lane change assist and rear cross traffic alert, a moonroof, push button start, fog lights, rear LED lights, and a digital driver display.

For hatchback buyers, there is no option to choose between the LX and S trim levels, though it is not much different than the choice between adding the Popular Plus package or not. For sedan buyers, the LX represents a more entry-level option while the S is the upgraded model.

In general, most buyers today will probably opt for the S, due to the touchscreen infotainment system with smartphone integration, a rearview camera and standard automatic transmission. Few new cars are sold today without these features. At roughly $1,500 more than an automatic LX model, it is almost certainly worth it to upgrade for those features alone.

The availability of advanced driver assistance features is merely an added bonus for choosing the S. Similar arguments, albeit without the safety equipment, are likely to drive most buyers to choose the Popular Plus package for the LX Forte5 hatchback.

Compare the 2018 Kia Forte LX or S vs EX Trim Levels. What is the difference?

The EX is the top model for the sedan version of the Kia Forte and the mid-range model for the hatchback, though the highest hatchback model also has mostly the same features. Both models come equipped with 17-inch wheels, leather interior, and heated front seats, as well as a rearview camera and the 7-inch infotainment system.

The sedans also include blind spot monitors with lane change assist and rear cross traffic alerts together with dual-zone automatic climate control. On the hatchback, those features are also available, but as part of an optional package. Both of the EX versions use the same 164-horsepower engine, which is an upgrade from the S sedan model, but the same as that used on the LX hatchback.

The sedan and the hatchback both offer an optional package with similar equipment. It is called the EX Premium Package on the sedan and the EX Premium Technology Package on the hatchback. Both add a power driver’s seat, front seat ventilation, navigation, HD radio and a sunroof. The hatchback version of the package also adds dual-zone climate control and blind spot monitors, while the sedan version instead bundles in the advanced safety features from the S Technology package: mainly forward collision warning with automatic braking and the lane departure warning with lane keep assist.

It is important to note that these advanced safety features are not available on any of the hatchback models.

While the EX models offer some improved features over the LX and S models, the main distinction between them is the leather seating with heat, ventilation and dual-zone climate control. This is especially true of the S sedans, which can be equipped with the same optional safety technology in both versions.

In general, unless the seat climate control and leather upholstery are of major importance, drivers are better off sticking with the S sedan. For hatchback drivers, the upgrade to the EX can be a little more worthwhile, as it allows access to blind spot monitoring systems, but it is otherwise a similar consideration as with the sedan models.

Compare the Forte EX vs SX Trims. What is the difference?

The highest trim level of the Kia Forte, the Forte SX is almost identical to the regular EX Forte. It is the strongest and the most responsive version of the Forte however, thanks to its turbocharged 1.6-liter engine that makes 201 horsepower and a quick-shifting 7-speed dual-clutch automatic transmission with optional manual controls.

Aside from those powertrain changes, the Forte5 SX also comes with larger 18-inch alloy wheels and specially-designed sport bumpers that have red accents to emphasize the model’s sportiness. Aside from those features, the Forte SX is the same as the Forte EX hatchback. It even comes with the same optional package, though it is renamed as the SX Premium Technology Package for this model. The other unique option on the SX is the available manual transmission, though it comes at a hefty $2,200 premium. It is the only Forte hatchback that can be equipped with a manual gearbox.

For most buyers, there is little reason to choose the Forte SX over the Forte EX. While the SX is slightly more powerful, none of the Forte models were really designed with performance in mind. Similarly, given the Forte’s budget price range, it is unlikely to find itself competing with any real dedicated hot hatches. For some buyers, the unique styling and the 30 or so extra horses can be worth the $1,700 premium over the EX, but those looking to maximize their value for the money should give the SX a pass.

While there are three different models of the Forte available for each body style, the main decision when choosing one is likely to come down to whether the prospective buyer wants one with a leather interior or is content with the standard cloth.

In the former case, the EX is the sole choice, as it includes both the leather interior and all of the other advanced features that the Forte has to offer. For those who are happy with cloth, the LX hatchback with the Popular Plus package or the S sedan offer the best value.

While the base LX sedan or hatchback can be a good option for buyers with a really tight budget constraint, almost everyone else will want to spend the little extra it takes to get the highly demanded comfort and convenience features that the upgraded models bring.

To avoid overpaying on a new car, shop prices online first. Get up front pricing before you walk into a dealership. We recommend the following free services; Car Clearance Deals, NADAguides, CarsDirect & Motortrend.
These free services will offer you the lowest prices and supply you with multiple competing price quotes. You will know the best price before you visit the dealer.
Save Money on a 2018 Kia Forte:
2018 Kia Trim Level Buying Guides: