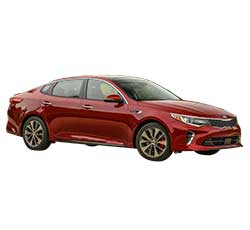 What 2018 Kia Optima Trim Level Should you Buy? What is the Difference Between the Trims?

When it comes to automakers that have improved the most over the last decade, in terms of both the quality of their vehicles as well as sales and public perception, Kia would be near the top of the list. It has gone from producing cheap economy cars to building vehicles that easily keep up with and sometimes overtake offerings from many of its long-established competitors.

A good example of that development is the Kia Optima. The current generation of the Optima, launched for the 2016 model year, looks beautiful, feels comfortable, and is filled to the brim with deluxe features. Due to its calm driving dynamics, large cabin and trunk, many standard features, and one of the longest warranties in the industry, it has been a hit with families and new drivers alike.

While it did not see any changes in 2017 due to the 2016 redesign, the 2018 Kia Optima now offers even more standard safety and infotainment features, making it a good choice when it comes to consumer value.

Kia is an automaker that tends to break the established rules when it comes to putting together trim levels, which can be both refreshing and confusing at the same time. The 2018 Optima comes in five main varieties: LX, S, LX 1.6 T, EX, and SX. Some of these models are fairly similar, while others make significant changes relative to the earlier version.

This guide analyzes each of the available trim levels in order for shoppers to be able to easily narrow down which 2018 Kia Optima trim level they like best.

The basic model of the Kia Optima comes with a good number of features that make even this entry-level model fairly attractive. Among the equipment included are 16-inch alloy wheels, heated side mirrors, power lumbar support, and automatic headlights, alongside basics like keyless entry, air conditioning, and cruise control. There is also an impressive standard infotainment system with a 7-inch touchscreen, Bluetooth, Android Auto, Apple CarPlay, six speakers, and both USB and auxiliary inputs.

It also comes with a solid active safety set, including blind spot monitors with rear cross traffic alerts, lane change assist, and rear parking sensors. The Optima LX uses the base 2.4-liter Optima engine that gets 185 horsepower, and comes with a standard 6-speed automatic transmission.

There are two optional packages available for the LX. The Tire and Wheel Package adds 17-inch alloy wheels and the tires to go with them, and is a requirement for the second package. That is the Convenience Package, which adds a fully power-adjustable driver’s seat, one-touch window controls, and sound absorbent glass for the front door windows.

The LX 1.6T is almost the same in terms of its standard equipment as the LX, being essentially a variant of that trim level. It comes with all of the same base equipment available on the regular LX, as well as the contents of the Convenience Package, though it has its own 16-inch alloy wheel design rather than the optional 17-inch ones from the LX Tire and Wheel Package. It also comes with a leather-covered steering wheel and gear shifter.

The main attraction of the LX 1.6T is the 1.6-liter turbocharged engine suggested by the trim name. It clocks in at 178 horsepower, making it roughly as powerful as the standard engine, but gets on average 2 miles per gallon more in fuel economy. It also comes with a more responsive 7-speed dual clutch automatic transmission. As it includes most of the options from the regular LX, no further optional packages are available for the LX 1.6T.

For almost everyone, there will not be a major difference between the LX and the LX 1.6T models, and the decision comes down to much the same factors as with all other eco or hybrid models: is the added up front expense worth the lower fuel costs in the future. In terms of the LX 1.6T, the fuel economy savings are not that big, but neither is the increased cost, as it is only about $1,000 more expensive than the LX with the Convenience package.

An important factor that could play a role is driving feel. The LX 1.6T gets 7 less horsepower than the LX, but it is a turbocharged engine and has a more responsive dual-clutch transmission. For some driving styles, that could lead to a better experience than the conventional automatic of the LX.

Compare the 2018 Kia Optima LX vs S Trim Levels. What is the difference?

The Optima S is a new trim level added this year, and it is designed to give the Optima a look that is a little sportier. That includes the 17-inch wheels from the LX Tire and Wheel Package, as well as a spoiler, LED fog lights, and combination LED rear lights. It also comes with a power driver’s seat and an upgraded upholstery with leatherette inserts.

There are three optional packages available for the Optima S. The S Wheel and Tire Package replaces the 17-inch wheels with machined 18-inch ones, and adds in sporty side sills. The Panoramic Sunroof Package adds a panoramic sunroof and interior LED lighting. The two packages are combined in the S Sport Panoramic Sunroof Package, which includes all the features of both. An interesting note is that it costs $100 more than the two packages do separately, and they can’t be combined otherwise.

The choice between the Optima LX and the Optima S can be a difficult one, as they offer almost the same equipment and are priced very similarly. An Optima S costs only $150 more than the Optima LX with both optional packages, which gives it roughly the same equipment. For drivers that like the sportier styling or want to add on the moonroof, the Optima S is a good choice. For those that don’t like the aggressive look of the S, the LX is a better choice. But the close price and the similar options make the decision between the two almost entirely a matter of taste.

Compare the Optima S vs EX Trims. What is the difference?

The EX is the premium Kia Optima, and comes with a leather upholstered interior, heated front seats, dual-zone climate control, and similar luxury amenities. Driver’s seat memory, automatically folding side mirrors, push button start with smart entry, and woodgrain dashboard trim are all included. The two optional packages available on the EX are equally decadent. The Premium Package extends the power seating to the front passenger and adds ventilation to both front seats. An auto-dimming rearview mirror, hands-free trunk, power moonroof, and interior LED lighting are also all a part of the upgrade.

Models with the Premium Package can be further enhanced with the Technology Package, which adds additional safety features to the model. Smart cruise control, automatic emergency braking, forward collision warning, lane departure warning, and an electronic parking brake are all key components of the package. The Technology Package also adds an upgraded 8-inch infotainment screen with built-in navigation and voice commands, a speaker system by Harman/Kardon, and a sport front bumper with chrome accents and LED fog lights.

While the base EX feels like a bargain at a decent starting price for the segment given the features it adds, it can quickly increase in price when adding up the optional packages. Fully loaded, it comes in at over $30,000, which can be relatively expensive for the segment, though it is accompanied by a strong selection of equipment. For drivers that want the full range of available safety features, this is the best choice however. Similarly, the drivers who want leather seating will also naturally lean towards this model.

Compare the Optima EX vs SX Trim Levels. What is the difference?

The SX combines the comfort and technology of the EX with the sport styling of the SX, and then takes them both up a notch. The SX comes standard with all of the basic EX features, as well as 18-inch wheels, a sport body kit, and a rear spoiler. It also includes a standard moonroof and auto-dimming rearview mirror, as well as heated and ventilated front seats and a dynamic bending function for the LED headlights. Its leather upholstery also has a unique sport look with red contrast stitching, and there are sporty accents throughout the interior. It also upgrades the engine to a 2.0-liter turbocharged four-cylinder with 245 horsepower that serves as an even match for various rivals’ V-6 options.

Like the EX, the SX also offers a Technology Package with the same safety equipment, upgraded infotainment system, navigation, and Harman/Kardon audio. It also has a unique Limited Package that ups the luxury level on the vehicle. The package adds quilted Nappa leather upholstery, leatherette accents on the doors and instrument panel, and black tricot headliner and side pillar covers. It also comes with special chrome wheels and exterior chrome accents, as well as heating for the steering wheel and rear seats, and a surround view camera.

Luxurious and powerful, the Optima SX is the best option for both drivers that want a comfortable car and those that want a powerful one. However, that impressive set of features comes at a price, with the SX being about $5,000 more expensive than the EX and starting north of $30,000. That is generally below the price of high-end models of other mass-market sedans, and the features definitely make it a worthwhile upgrade, but the big price jump does put it out of the price range of many of the more value-oriented buyers.

While the trim list of the 2018 Kia Optima is a little different in its progression from the usual in the mid-size sedan segment, the Optima still offers excellent value for a variety of of drivers, especially on the lower end of the equipment spectrum.

The three base models - the LX, LX 1.6T, and the S - are all very close in price, but offer nice specialized feature sets for budget buyers, economy drivers, and those looking for sporty styling. From there, buyers looking for nicer equipment can upgrade to the EX, and the drivers looking for a more exciting engine can get the SX, which comes with the luxury equipment of the LX as a bonus.

While the Optima could benefit from more options on the higher end of the trim lineup, it still covers most of the common features drivers look for.