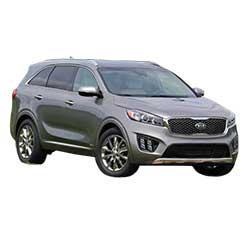 What 2018 Kia Sorento Trim Level Should you Buy? What is the Difference Between the Trims?

The last several years have presented consumers with an impressive variety of mid-size crossovers to choose from, including everything from sporty performance vehicles, rugged off-roaders, and versatile comfortable family cars.

In the latter category, the Kia Sorento is among the outstanding models. It offers a generally nice performance and a fair bit of technology, but it is its spacious cabin, upscale trimming, and an overall focus on passenger comfort that places it near the top of critics’ best-of lists for the mid-size SUV segment. The Kia Sorento has remained mostly unchanged since its full redesign two years ago, and the 2018 Kia Sorento is pretty much the same as the 2017 one.

The Sorento comes in five major trim levels, but there are plenty of choices for buyers to make beyond that. Several of the trim levels come with a number of options, and there are also three different engines, with several models offering a choice between two. Most models also come with a number of factory-installed packages that can significantly change the features they offer.

In order to help potential buyers, we have analyzed each trim level, listing the features that it adds and the options it has available.

Compare the 2018 Sorento L vs LX Trims. What is the difference?

Decently equipped and frugally priced, the base L model of the Sorento offers a fair bit of equipment for the money. Cloth seats, two rows of seating, a rearview camera, Bluetooth, heated outside mirrors, and power locks and windows are all standard on this model. There are also 17-inch wheels, a 4.3-inch infotainment touchscreen, and steering wheel audio controls.

The L comes with the sole option of the base 2.4-liter four-cylinder engine, which is the weakest in the Sorento lineup at 181 horsepower. It comes matched with a six-speed automatic transmission, but is not available with all-wheel drive and there are no other engine or transmission options.

The LX builds on the base L equipment by offering considerably more options. The engine can be upgraded to a more powerful V-6 option generating 290 horsepower, and both models offer all-wheel drive as an option. Besides those options, the LX also adds two more USB ports and a windshield made of acoustic glass. It also includes the standard Cool and Connected Package that upgrades the infotainment to a 7-inch touchscreen with Android Auto and Apple CarPlay, as well as an automatic dual zone climate control.

Beyond that, a number of optional packages are available for the LX. The LX Convenience Package replaces the Cool and Connected Package, and adds rear parking assist, a power driver’s seat, heated front seats, and leather trim for the shifter and steering wheel in addition to the Cool and Connected features.

Models with the Convenience Package can be equipped with an optional third row, and those with both can also add an Advanced Technology package. Containing smart cruise control, forward collision warning, automatic emergency braking, a lane departure warning, and an electronic parking brake, the package adds considerably to the safety options of the Sorento.

The options packages are the same between the four-cylinder model and the V-6, except that the V-6 does not come with the Cool and Connected Package standard, but automatically includes the third-row seating instead.

Moving up to the Sorento LX from the L does not offer much features for the money, but it does add a lot of different options. For many buyers, the Cool and Connected Package alone is easily worth the $1,300 increase in list price, due to how useful the smartphone integration features are. Similarly, this will likely be the entry level model for most people in the Snow Belt or the more rural areas, where all-wheel drive is a strong convenience if not a downright necessity.

The lack of a third row also hampers the efficiency of choosing the Sorento L as a no-frills people transporter. For most buyers in the segment, the LX will be the choice that offers the better value.

Compare the 2018 Kia Sorento LX vs EX Trim Levels. What is the difference?

While the EX sits right in the middle of the Sorento trim lineup, it certainly feels more upscale. Equipped with leather seat trim, heated front seats, and most of the optional amenities from the LX model, it also includes a fairly nice upgrade to the interior trim pieces and accents over the LX. Dual zone climate control, power driver’s seat, upgraded 7-inch infotainment system, a blind spot monitoring system with rear cross traffic alert, a hands-free liftgate, and fog lights are also all included on the EX trim. Push button start with smart keyless entry is also standard on the model.

It also comes with a choice of two engines. Like on the LX, the V-6 is the more expensive option and includes third-row seating. The smaller of the two engines is a turbocharged one on the EX, displacing two liters and producing 240 horsepower.

For many, this is actually the best of the Sorento engines, as it offers nearly the same power as the V-6, while only making one less mile per gallon than the base engine. Because it is turbocharged, it also feels more responsive than the V-6, though the latter is slightly faster. Unfortunately, the turbocharged EX is limited to two rows of seats, though it does offer all-wheel drive just like the V-6.

Both models offer the same optional package to build on their standard equipment. The Advanced Touring package adds the safety features from the LX Advanced Technology Package, as well as a panoramic sunroof, LED interior lights, a 110-volt outlet, and chrome low-profile roof rails. It is the only available optional package for the model.

As the first of the upmarket Sorento models, there is much to recommend it as an upgrade over the LX. Besides the leather seating and the additional standard features, it is also the only model to offer the fun turbocharged four-cylinder engine. It is also the lowest trim level that is equipped with the hands-free liftgate, which is a very convenient option that is increasingly becoming sought after by crossover buyers.

These options come at a hefty price however, with an LX bundled with similar features costing thousands of dollars less. But the EX does a very good job of justifying its increased cost, making it an attractive value.

Compare the Sorento EX vs SX Trims. What is the difference?

Available solely with the V-6 engine, the Sorento EX makes slight improvements to the feature and option set of the EX all around. The infotainment system is upgraded to an 8-inch touchscreen with built-in navigation, and it is linked to a 10-speaker Infinity sound system.

The power driver’s seat gets an extra adjustment, and a panoramic sunroof and the hands-free liftgate are both standard. Rain-sensing windshield wipers complete the standard feature set, and like all V-6 Sorentos the SX comes with three rows of seats.

The only optional package is the SX Touring Package, which includes the active safety features and high intensity discharge headlights that automatically level themselves and turn side to side with the movement of the steering wheel. The package also adds heating to the steering wheel and ventilation to the front seats.

The upgraded infotainment and the sound system make up the bulk of the features that are added to the SX over the EX, aside from the visual upgrades and the optional features included from the EX. At the same time, the SX costs $5,000 more than the V-6 EX, which is a significant increase in cost considering the features added.

Unless the premium speakers or the extra seat adjustments are particularly important, most buyers are likely to be better off adding packages to the EX than moving up to the SX. The SX also does not offer any alternatives to the V-6 engine, which raises its cost of ownership a fair bit on top of its high price point.

Compare the Sorento SX vs SX Limited Trim Levels. What is the difference?

Serving as the peak of the Sorento lineup, the SX Limited has all of the standard features of the SX, as well as including all of the components of the SX Touring package as standard. Like the SX, it is available exclusively in a three-row, V-6 configuration, with the choice of either front-wheel drive or all-wheel drive. On top of the features from the regular SX, it also includes a surround view camera and 19-inch chrome wheels. It also has wood grain accents throughout the interior, and uses the more premium Nappa leather trim. As the pinnacle of the Sorento models, it offers no optional packages.


For drivers choosing between the SX with the Touring Package and the SX Limited, the choice clearly leans towards the SX Limited. For a relatively small premium, it includes a much nicer interior and a few more technical features, not to mention some nice wheels. However, for buyers that are not necessarily sold on the value of the SX itself, the SX Limited offers only a little more for the added price. Those who are aiming to maximize their value are likely to stick with the EX model, though those looking to maximize comfort will find the SX Limited a worthy investment.

The large range of options that the 2018 Kia Sorento presents to potential buyers makes narrowing down a single trim or two as the best difficult. Compared to its neighbor trims, both the EX and the SX Limited stand out for their added comfort, luxury and technology options in relation to the price differences compared to the trims above and below them.

The LX is also a strong choice for drivers looking to maximize their value and their available choices. The two trims that are not likely to offer a good return on investment for most are the L and the SX. With its limited options and only marginal savings over the LX, the L is eclipsed by the better value that the LX offers.

Similarly, the SX offers only a few options that the EX does not, while being much more expensive. We recommend that drivers begin their Sorento search by looking at the LX model, and upgrading to either the EX or the SX Limited depending on their particular equipment needs.