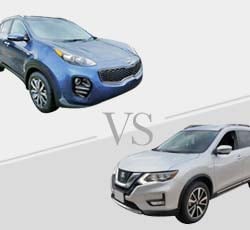 Crossovers are becoming more popular because of their versatile design. The 2019 Kia Sportage and Nissan Rogue are some of the more affordable choices in this category of vehicles. They have comfortable interiors, stylish exterior details, and relatively powerful engines, making them ideal for many drivers who want the feel of an SUV without getting something too bulky.

The Kia Sportage comes standard with an engine that can generate up to 181 horsepower. It runs on a 2.4-liter four-cylinder engine that has 175 pound-feet of torque. It's paired with an electronically controlled automatic transmission with six different speeds and the "Overdrive with Sportmatic" system. This system allows drivers to manually shift gears, giving them a more authentic experience while accelerating and zooming around town.

Fuel economy on the LX and EX trims, which have the 2.4-liter engine, is an estimated 23/30 (city/highway) mpg. That drops down a touch to 21/25 mpg if all-wheel drive is selected.

With either engine, the towing capacity is pretty solid. If trailer brakes are included with the vehicle, towing capacity is 2,000 pounds. If not, the SUV can still tow up to approximately 1,500 pounds. Either way, the Kia's abilities here are much better than the Nissan's. The Rogue can only tow 1,102 pounds.

In front and back, the Kia has disc brakes that are hooked into an anti-lock brake system to reduce slippage. There are MacPherson struts up front along with gas shock absorbers, and in the back, independent multi-link dampers smooth things out.

On the Nissan Rogue, horsepower is almost the same, at 170 pounds, and torque is 175 pound-feet. All of the trims, with the exception of the hybrids, use a 2.5-liter four-cylinder engine. Drivers can select from either Eco or Sport mode if they want to change the settings to be a little more eco-friendly or a little more aggressive. Fuel economy with FWD trims is 26/33 mpg, and with the AWD it gets bumped down to 25/32.

The hybrid SV and SL also use a four-cylinder engine. Its displacement is two liters, and it's used in conjunction with an electric motor. The result is a net of 176 horsepower and 144 pound-feet of torque, so most people won't notice a difference in terms of how the hybrid stands up compared with the standard engine.

If anyone is expecting a huge jump in efficiency, the expectations may need to be adjusted. The hybrid models can travel 33/35 miles to every gallon with front-wheel drive and 31/34 miles to every gallon with all-wheel drive. While these aren't outstanding numbers compared to what else is available in the market, they're certainly better than what the Sportage has to offer in this department.

The four vented disc brakes are supported by an anti-lock braking system and electronic brake force distribution. The Nissan has several things going on at the same time to improve handling, such as Intelligent Trace Control and Active Ride Control. Lessening the impact of driving over bumps on the road are independent front struts and an independent multi-link rear suspension. As seen in the Sportage, there are stabilizer bars in the front and the rear to provide extra structure.

Things are roomy in the Sportage, at least up front. Leg room in the front is 41.5 inches, and in the back, it's 38.2 inches. Cargo volume is 30.7 cubic feet behind the second row and 60.1 cubic feet when the seats are lowered.

This is comparable with the Rogue, which has either 43 or 37.9 inches of leg room depending on whether someone is riding in the front or rear. The amount of dedicated cargo space in the Nissan crossover is a much greater 39.3 cubic feet. That expands to 70 cubic feet when the rear seats are folded down. This is a key point for anyone who plans on packing a lot in their car.

The Kia's seats are comfortable, made with cloth on the LX and leather on the others. With the LX, the driver's seat can be manually adjusted in six different ways. That's in contrast to the ten ways in which the seat can be adjusted on the other trims; plus, those seats are power-operated. The EX and SX Turbo have heated seats, and the SX Turbo's seats are ventilated as well. Further, the SX Turbo has stylistic touches like a heated sport steering wheel, alloy pedals, and metal scuff plates on the door to enhance it's overall feel.

The three trims on the Sportage all include touchscreens. From the touchscreen, people can control their music selection, make phone calls, check text messages, and see the feed from the rear camera when the vehicle is in reverse. The system is updated to one called "UVO" on the EX and SX Turbo. UVO either comes with a seven- or eight-inch display, depending on whether it's the EX or SX Turbo model. The eight-inch screen comes with voice-command navigation and HD Radio along with live traffic from SiriusXM. Android Auto and Apple CarPlay become standard at the EX level, but they can be included for an additional fee on the base LX model.

On all trims, there are steering-wheel-mounted controls so that hands can stay on the wheel at all times. Additionally, each car has at least one USB port and one 12-volt power outlet.

Remote keyless entry is standard in these Kias, and it's upgraded to a smart key system that allows drivers to use a push-button start on the top two trims. Other upgrades that start with the EX are a dual-zone automatic climate control system and illuminated vanity mirrors in the visors. The SX Turbo comes with an auto-dimming rearview mirror and an upgraded display that shows vehicle performance.

For those who like premium sound, the Harman/Hardon audio system has 320 watts and eight speakers. Clari-Fi technology is used to improve sound clarity. This premium system is available on the EX and standard on the SX Turbo.

Just as with the Sportage, the Nissan Rogue has a different feel on each trim, starting with standard elements like cloth seats and a manually adjustable driver's seat. The driver's seat becomes a powered model with eight different adjustments on the SV. Leather is standard only on the SL and SL Hybrid.

Other luxuries that are included on the SV and above include heated front seats and a leather-wrapped steering wheel. On the SL and SL Hybrid, that steering wheel can be built with a heating element to add some warmth on wintry days. On the SL models, the metallic door finishers have a geometric pattern to add visual interest.

In terms of the infotainment system, it's a huge perk that all the trims on the Rogue come with Apple CarPlay and Android Auto connectivity along with a seven-inch touchscreen. While drivers are backing up, the touchscreen shows the video images from the rearview monitor. On the SL, it's an all-around monitor that can be useful in tight spots.

Four speakers are what's included on the S, and there are six on the SV and nine Bose speakers on the SL. SiriusXM Radio is available staring with the base model. Two USB ports are included for charging, and the controls mounted on the steering wheel are illuminated so they're easier to see.

With Bluetooth capabilities in place on all Rogue trims, drivers can keep their hands off their phones. SiriusXM Traffic and Travel Link is included on the SL trims, as is a HomeLink Universal Transceiver and an advanced cruise control that can maintain not only speed, but the right distance with car in front. The transceiver can be programmed to control items in one's home, such as garage doors, remote lighting, or even home security systems.

The base model of the Rogue has a remote keyless entry, like the Sportage. Similarly, the next model up comes with a push-button start, but what the Nissan has that the Kia doesn't is a remote engine start system. This is included on the SV trim and above.

Given the modern safety standards, it makes sense that the 2019 Sportage and Rogue has a full array of airbags that can protect passengers in case of impact from any direction. They also have three-point seat belts for even the back passengers and crumple zones that are designed to absorb the brunt of the impact in case of an accident.

Driver-assist features not present on the Sportage LX, unfortunately. They are included on the EX. The EX can assist a driver with changing lanes by determining whether another car is in his or her blind spot, and it can warn drivers if traffic is crossing the path when the vehicle is in reverse.

The SX Turbo includes all of those features plus a few more. Emergency braking can engage if the car's computer system predicts an imminent impact. Drivers can take advantage of parking assistance when either pulling into or backing into a spot. Finally, the SX Turbo can send out a warning when drivers are starting to veer out of their lanes.

Unlike the Kia Sportage, the Nissan Rogue has many driver-assist features on all of its models. All of the Rogues have a blind spot warning system that can prevent accidents during changing lanes, a rear cross traffic alert that acts as an extra pair of eyes, and an emergency braking system that can lessen the likelihood of front impacts with other cars and pedestrians. An automatic braking system that can engage while the vehicle is in reverse is only present on the SV and above.

With a modest price of $23,750, the Kia Sportage LX is priced competitively. For about three thousand dollars more, customers can get a much more comprehensive safety package as well as nicer interior and exterior finishes. The Sportage EX has a starting MSRP of $26,600. Finishing off the trio is the SX Turbo, priced at $33,100. Given the more powerful engine and high-end details included in this vehicle, it's priced well.

At a higher level, the Rogue starts out at $25,020 with the S trim. The SV, which has more enhancements like a motion activated lift gate and nicer wheels, is offered at $26,440. Its hybrid counterpart is $27,700. The SL and SL Hybrid are priced almost the same, at $31,490 and $31,640, respectively. At these higher trims, the ride is more pleasant thanks to fine touches and a more comprehensive infotainment system.

If someone just wants the base model of a crossover, the 2019 Nissan Rogue will likely get the nod over the Kia Sportage. It has more safety and entertainment features built into it, making it feel more modern and high-tech. What the Nissan Rogue has that the Kia doesn't are hybrid models, and overall, the Rogue edges out the Sportage in efficiency. However, power is key for some drivers, and if this is the case, the 240-horsepower Kia Sportage SV Turbo is the way to go.

Save Money on a 2019 Kia Sportage:
Are you Shopping for a New Vehicle? Find the Best Deals with "Free - No Hassle" Prices Quotes.