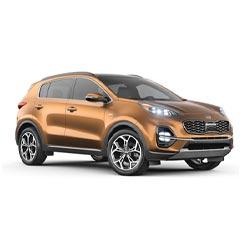 What 2021 Kia Sportage Trim Level Should you Buy? What is the Difference Between Trims?

The 2-21 Kia Sportage is one of those vehicles that can please a lot of people. It gives people a choice of powertrain, it comes with an array of high-tech features to boost safety and convenience, and it has a compact body that stills allows for some versatility. It won't win any awards for size or strength, but that actually means that it's more practical for a wide sector of consumers. It's sure to be a top choice for many people with its reasonable price tag.

As a compact SUV, the 2021 Kia Sportage could be considered a crossover by some. It handles like a car would handle, but it has more cargo space due to the height of its cabin. It can either be configured as a front-wheel or an all-wheel drive vehicle. With FWD, it has a ground clearance of 6.4 inches. An additional 0.8 inches of ground clearance is found in the AWD versions.

Two rows provide seating accommodations for five people. Leg room is generous so three people can fit comfortably in the back. They'll have 38.2 inches of leg room, and this is only a bit less than the 41.5 inches of leg room in the front row.

Just like the amount of leg room that the Sportage has might surprise people, so might the cargo capacity. In the back of the SUV, there is a storage area with a volume of 30.7 cubic feet. It takes a few seconds to fold down the rear seatbacks to expand cargo capacity to 60.1 cubic feet. The 60/40 split-bench configuration allows for some flexibility in terms of the arrangement. One seat can be folded down if anyone needs to transport something long, along with two passengers. The other side with two seatbacks could also be lowered, or all three could be lowered if something very large needs to be carried.

Compare the 2021 Kia Sportage LX vs S Trim Levels. What is the Difference?

These two Kia models use 2.4-liter, four-cylinder engines. This standard Sportage engine is capable of generating 181 horsepower and 175 pound-feet of torque, which is certainly enough to make the SUV feel responsive during acceleration and capable of tackling steep hills or somewhat rugged terrain. The engines use a direct injection fuel delivery system and are paired with six-speed automatic transmissions. With this type of transmission, Kia has put in a Sportmatic function, giving drivers the option to manually shift gears whenever they want some more control. Towing capacity is 2,000 pounds if there are trailer brakes and about 1,650 pounds if there aren't.

As mentioned, the Sportage can either come with a front-wheel or all-wheel drivetrain. The AWD system has a locking center differential that can be engaged when conditions are particularly difficult. Most Sportage drivers won't need this feature on a regular basis, but it's good to have if anyone might ever face wintry conditions and snowy or icy roads.

When looking at the exterior of the Sportage LX and S trims, there are more similarities than differences. Both have door handles that match the exterior paint color, chrome window surround, rear privacy glass, and a rear spoiler. They also both have automatic high beams to make it easier to see what's in front of the vehicle on dark roads, LED Daytime Running Lights that look modern, and headlights that can turn on and off automatically. One distinction is that the S has fog lights while the LX doesn't.

The LX has a matte black and chrome front grille, while the S's grille is gloss black and chrome. On the S, there's the opportunity upgrade to more sleek Nightfall Edition badging and stylings. Further, the S has metal-look skid plates, roof rails, and heated outside mirrors. Out of these two, only the S comes with the option to get a panoramic sunroof. The S's wheels, at 18 inches, are one inch larger than the wheels on the LX, and they have a dark gray finish.

Everyone can appreciate that the LX comes standard with an eight-inch touchscreen, smartphone compatibility, Bluetooth, and voice recognition. This is pretty much what's expected from high-quality vehicles these days, and the Kia Sportage doesn't disappoint. Though the S comes with the option to get SiriusXM Satellite Radio, its standard package is the same as that of the LX. Both trims have six speakers, Siri Eyes Free technology, and audio controls mounted on the steering wheel so people don't have to take their hands from the wheel when adjusting the volume or the radio station.

Seats on the LX are covered in woven cloth. On the S, the seats are trimmed in a Sofino material, which is a synthetic leather. On either trim, there's the option to get heated front seats and a power-adjustable driver's seat. Only the S has a leather-wrapped steering wheel, an optional flat-bottomed steering wheel, and available alloy sport pedals.

There aren't too many differences when it comes to the safety components of the LX and S. Fortunately, Kia has included numerous driver-assist technologies into these lower trims of the Sportage. For instance, they both have a forward collision-avoidance assist system that can detect pedestrians, a program that reminds people to stay focused on the roads, and mechanisms that can help drivers stay centered in their lanes. It is important to note that the LX doesn't have the S's blind spot and rear cross-traffic monitoring systems, though they can be added on for an additional cost.

Compare the 2021 Kia Sportage S vs EX Trims. What is the Difference?

First, the S and EX both use the same engine, which was previously discussed in detail. The EX is slightly less sporty than the S, as it doesn't have the metal-look skid plates or the dark gray finish that the other trim has. What it does have are half chrome door handles and solar control glass to keep things color on sunny days. Only the S comes with available paddle shifters on the steering wheel.

The EX has the Smart Key system and push-button start. With this special kind of key fob, the doors can unlock when the driver has the key in close proximity and simply touches the door handles, and the liftgate can open on its own when the driver stands behind it (again with the key in close proximity) for a few seconds. Part of this system is the Smart Welcome component. The Sportage can sense when the smart key is approaching it, presumably in someone's pocket or bag, and it can greet people by unfolding the side mirrors and illuminating itself.

The standard technology package on the EX is the same as on the S. However, with the EX trim, people can upgrade to an infotainment system that includes navigation. This can be very useful when trying to find one's way to an unfamiliar location or when trying to avoid traffic. The EX has an available premium sound system with eight speakers, and it comes standard with a rear charging port. Both he S and EX have wireless charging as an available feature.

Dual-zone climate control is found in the EX to let the front passenger have some control over the temperature. The vanity mirrors in the EX are illuminated, and leather seating trim is an option. Standard on the EX is a ten-way power-adjustable driver's seat, as are heated front seats to make things more cozy in the winter. A heated steering wheel and front-seat ventilation are available.

Smart cruise control is an option on the S and EX trims. It gives the Sportage the ability to control its own speed, even if the speed of highway traffic is variable. Smart cruise control can function in stop and go traffic, and it can be seen as an important safety component.

Compare the 2021 Kia Sportage EX vs SX Turbo. What is the Difference?

The SX Turbo is unique because it's the only Sportage trim to use a different engine. While having a four-cylinder engine like the rest of the trims, the SX Turbo has - as its name would suggest - a turbocharged engine. This engine has a displacement of two liters, and it can generate a much more impressive 240 horsepower and 260 pound-feet of torque. Clearly, the SX Turbo would be what one would select if power is one of his/her most important conditions.

Some efficiency is lost when moving up to the SX Turbo trim. A FWD SX Turbo can earn 20/28 (city/highway) miles per gallon, and an AWD version can earn 19/24 miles per gallon. Interestingly, towing capacity remains unchanged when upgraded to the turbocharged engine.

The SX Turbo can be thought of an amped up version of the S, as it has the same type of front grille and skid plates as its sporty counterpart. A standard panoramic sunroof is exclusive to the SX Turbo, as are LED headlights, LED fog lights, and LED taillights. This trim has chrome dual exhaust outlets and 19-inch wheels.

If prospective customers love the idea of having navigation, they'll be happy that it's included in the SX Turbo. Wireless charging and an eight-speaker sound system that uses Harman Kardon components is found in the SX Turbo as well. Another way in which technology is incorporated into the SX Turbo's cabin is in the rearview mirror. It can automatically dim when bright lights are detected to be less distracting at night, and it has HomeLink technology so it can act as a garage door opener.

More premium components are found throughout the cabin of the SX Turbo. It has standard LED interior lighting, which is only an option on the EX, and it has chrome on its inside door handles. In addition, it has leather seats, a power-adjustable front passenger's seat, and ventilated front seats, all of which are similar to what luxury vehicles offer. Plus, the steering wheel is heated, and there are alloy sport pedals and metal scuff plates on the doors to enhance the sophistication.

From a safety standpoint, the SX Turbo has a few extras not included as standard components on the EX. It automatically comes with the smart cruise control system, and it comes with parking sensors in the front and rear to hopefully prevent accidents.

Given their competitive pricing, all four trims are actually solid options. The LX is priced under $24,000, and the SX Turbo starts at a little over $33,500. Remember that for its premium price, the SX Turbo has the better engine and all of the upscale touches inside its cabin. However, the reality is that its price will turn many people away.

Kia generally attracts a lot of budget-conscious consumers. Considering this fact, the S is the most recommended 2021 Sportage trim. Its starting price is about $26,500, which is ideal for many people. It has some stylistic details that help it stand out, it has the nice synthetic leather seats, and it has blind spot monitoring. It really is a complete package, and if anyone wants slightly more features, the S trim comes with many available options.