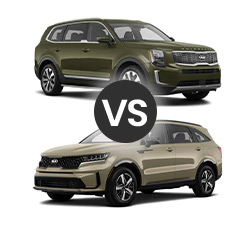 2021 Telluride vs Sorento - How do they stack up? What are the differences?

As mid-size SUVs, the Kia Telluride and Kia Sorento have a lot to offer. They look sporty and durable with their relatively large and boxy frames, and they have modern stylings on their exteriors and interiors. They both have three rows of seats, so this will attract the attention of those with large households. The Telluride is the more sizable model, and this overview will review other differences between the two SUVs.

As jus mentioned, the Telluride is the larger of the two SUVs. It has a length of 196.9 inches, compared with the Sorento's length of 189.4 inches. Seven inches might not seem like a significant difference, but it does impact how much cargo can fit and how comfortable passengers can be. When all the rear seats have been folded down, maximum cargo capacity in the Telluride is 87 cubic feet. It's 75.5 cubic feet in the Sorento.

The Telluride is a few inches wider and taller than the Sorento is. This means that passengers will have some more room in the Telluride. Shoulder, hip, and head room isn't often talked about, but more is usually better. First, second, and third row leg room in the Telluride is 41.4, 42.4, and 31.4 inches, respectively. The Sorento does have a nice amount of space, with 41.4 and 41.7 inches of leg room in its first and second rows. Its third row is limited to having 29.6 inches of leg room. This would likely make taller passengers a little uncomfortable.

A very important point is that the Telluride can have room for either seven or eight passengers. In contrast, the Sorento can have room for six or seven. This discrepancy is due to the fact that the Sorento only has two seats in its third row, while the Telluride has three. With both models, the middle row can have a bench seat to fit three passengers or a pair of captain's chairs. Some customers need that extra seating position, whereas others would prefer having some more space for people to move around.

The two models can both have 18-inch or 20-inch wheels, but the Sorento's lower trims come standard with 17-inch wheels. This is a good example of how the Telluride is just a bit more refined in many ways than the Sorento is. The Telluride can have dual chrome exhaust tips and chrome door moldings to make it look more sleek.

The Sorento, though, has very nice options. It can have heated side mirrors with LED turn signal indicators, a black rear spoiler, LED headlights, LED fog lights, a smart power tailgate, and a panoramic sunroof. Those same features are available on the Telluride. The Telluride doesn't have the panoramic sunroof, but it can either have a traditional power sunroof or dual sunroofs to let in more light.

This is an area in which there's a fairly large distinction between the two Kia SUVs. The Sorento has two available engines, the first of which is a 2.5-liter engine that can generate 191 horsepower and 181 pound-feet of torque. It works together with an eight-speed automatic transmission, and with this standard engine, the Sorento can tow up to 2,000 pounds.

Three out of the five Sorento trims benefit from having turbocharged engines. One of these engines has a displacement of 2.5 liters, too. With the turbo design, it has a much more satisfying 281 horsepower and 311 pound-feet of torque. Kia has paired this engine with an eight-speed dual clutch automatic transmission. The top trim, the SX Prestige, has paddle shifters to give drivers the option of manual shifting. With the turbo engine, the Sorento has a towing capacity of 3,500 pounds.

A larger engine can be found under the hood of the Telluride. This SUV uses a V6 that has a displacement of 3.8 liters. It's quite capable, having 291 horsepower and 262 pound-feet of torque. It has been matched with an electronically controlled eight-speed automatic transmission, and it has a Sportmatic sports shifter that allows for manual shifting. The Telluride is much stronger than the Sorento when it comes to towing, as it can haul up to 5,000 pounds.

When driving over rugged terrain, it can be helpful to have a vehicle with high ground clearance. A front-wheel Sorento has a clearance of 6.9 inches. With all-wheel drive, the Sorento is lifted up more, and it has a ground clearance of 8.2 inches. This is comparable to the Telluride, which sits eight inches off the ground.

Overall, the Kia Telluride is the more upscale SUV out of these two models. It starts out with synthetic leather upholstery, and its higher trims have leather seats. An option on the SX trim is to have a more premium Nappa leather.

The two highest trims of the Telluride come standard with heated and ventilated front seats, with the option to get a heated steering wheel. In the Telluride's top trim, some available features are heated and ventilated second-row seats and a heated steering wheel. This trim has a sporty look, with stainless steel pedals and a stainless steel scuff trim on the door sills.

With the Sorento, the base model starts out with cloth seats. Mid-level trims have synthetic leather, and the highest trim, which is the SX Prestige, has perforated and embossed leather seats. That SX Prestige is the only Sorento trim to have heated and ventilated front seats, and it does come standard with a heated steering wheel. There's no option to have heated or heated and ventilated second-row Sorento seats.

In terms of other pieces of technology, things are similar in the two Kias. Their lower trims have eight-inch touchscreens, with the higher trims having 10.25-inch touchscreens. Across the lineups of the Telluride and Sorento, there are numerous components that come standard, such as Apple CarPlay, Android Auto, and six speakers.

If the models are enhanced with the larger touchscreens, they would have navigation as well. The top trim of the Sorento gets to have 12 speakers, and that of the Telluride has ten speakers.

Charging is always important these days since it seems like everyone has at least one device with them at all times. The Telluride can come with either five or six USB ports, in addition to the USB input jack. The Sorento has a minimum of six USB ports, and there could be one for each seating position. Wireless charging is standard in higher trims of both models.

Modern consumers are all about convenience, too. They'll appreciate that the Telluride has a smart entry system with push-button start in every one of its trims. This feature is found in the Sorento also. However, the entry-level Sorento doesn't have this system.

It's pretty impressive what Kia has done to keep its passengers safe. The Sorento and Telluride have a multitude of driver-assist technologies that can actively work to prevent accidents. This should give drivers some extra peace of mind as they head out on the roads and deal with unexpected situations.

The Telluride has the more comprehensive safety package. That's because blind spot detection and rear cross-traffic monitoring are standard with this SUV. In the Sorento, these components are there, but just not in the lowest trim.

Both SUVs are able to detect frontal collisions, know when they're veering out of position, and driving on particularly dark roads. If potential issues are detected, they will alert drivers to those situations, and they could help by hitting the brakes or adjusting steering, if appropriate. When driving on dark roads, the high beams can automatically turn on. Plus, the two models have a driver attention warning system that can actually sense when people aren't focusing their eyes on the road as much as they should be.

However, the Sorento has an available surround view monitor. This is a futuristic device that provides an all-around perspective of the vehicle. It's really useful when navigating around obstacles and getting in and out of parking spots. The Sorento also has an available blind view monitor. It takes blind spot monitoring a step further. It can show the driver a live feed of what's in the Sorento's blind spot when the turn signal is on.

It can be hard to choose between the Kia Telluride and Kia Sorento because they're both capable, athletic, spacious, and modern. They have many of the same qualities, even though the exact features may be slightly different from each other.

For this reason, those on more limited budgets will likely lean towards the Sorento. It's a solid SUV that would do well in a variety of situations. The Telluride is slightly larger and more powerful, so if someone has the extra money to spend, it would give them much to appreciate.