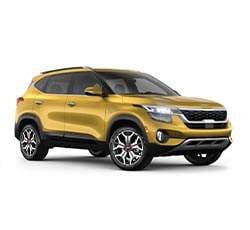 Compare the 2022 Kia Seltos Trims - LX vs S, Nightfall vs EX and SX Turbo. What is the difference between them?

People in the market for compact SUVs have quite a few choices, one of them being the 2022 Kia Seltos. The Seltos stands out in the market because of a few main reasons. It's affordable, modern, and packed with technology. It has several convenient amenities as well.

The Seltos is a new addition, having just come out in 2021. Kia makes five trims, so prospective buyers will have a lot to think about. This guide should hopefully help, as it'll go over what makes each trim unique.

Compare the LX vs S Trim Levels. What is the difference?

There are actually quite a few differences between the LX and the S when it comes to style. The LX has a black front grille, but the S has a front grille that has both black and chrome. More chrome is found on the window surround of the S, and the S has roof rails, too. While these certainly can be functional, they also add to the rugged look of the SUV. Notably, the S can have a two-tone appearance. Having a black roof and white body, for instance, can really make this vehicle stand out in a crowd.

The LX has some nice features, such as automatic headlights, a rear spoiler, and 17-inch wheels. With the S, the side mirrors get to have heating elements built into them, and they have LED turn signals integrated into them. More LEDs are incorporated into the Daytime Running Lights and rear tail lights. Up front, the fog lights of the S can help with visibility.

When comparing the cabins of the LX and S, it's a similar story. It's not as if the LX is lacking anything important, but the S just has some higher-end amenities. The LX has cloth upholstery, manually adjustable front seats, and a center console with storage. Having remote keyless entry is a plus.

In the S, the system is upgraded to a smart key system with push-button start. This means that the vehicle can sense when the key fob is near and will unlock itself when the driver simply touches the door handle. Also, the S has a remote start function, and all someone has to do to start the engine is to push a button on the key fob.

The S has automatic climate control instead of a manual system, and it has a rear duct to keep passengers more comfortable. As just mentioned, the LX has a center console to provide some extra storage. The console in the S can slide a few inches to the front and back, allowing the driver to set it up as a comfortable arm rest. There is a rear armrest as well, and that armrest has a pair of cup holders. LED interior lighting, chrome door handles, a leather-wrapped steering wheel, and a leather-wrapped shifter add to the style of the S trim.

In terms of seating, things are pretty simple with the LX, which has cloth seats. The S is upgraded with cloth and SynTex seats that have blue stitching, and there's the option to get heated front seats.

Technology is a major selling point for companies like Kia. Its LX trim has an eight-inch touchscreen that comes with Bluetooth, Apple CarPlay, Android Auto, and Siri Eyes Free. This makes the LX pretty attractive, but the S goes even further. It has a larger touchscreen that measures 10.25 inches, and it has voice-command navigation, SiriusXM Satellite Radio, and a rear charging port.

There's little distinction between the two trims when it comes to performance or safety. They both use 146-horsepower engines that can deliver 132 pound-feet of torque, and they have an array of driver-assist systems. They include driver attention warning, automatic high beams, lane keeping assist, forward collision warning, and automatic emergency braking.

Compare the S vs Nightfall Edition. What is the difference?

Kia's Nightfall Edition has been designed to be more flashy and bold than many of the others. Take its exterior features, for example. It has a unique front grille with a black color scheme, and it has a special lower door garnish. Its roof rails are slightly different than the ones found on the S, as they have a black sport design. On top of this, the Nightfall Edition has 18-inch wheels with a matte black finish. Like the S, the Nightfall is available with a two-tone look.

It's not just cosmetic differences that set these trims apart from each other. The Nightfall Edition is a trim that has standard heated front seats so people can stay cozy, and it has blind spot and rear cross-traffic monitoring. In addition to notifying drivers when vehicles are crossing behind them or are in their blind spots, the Seltos can help drivers avoid accidents by hitting the brakes when it's not safe to back up or change lanes.

Perhaps the main distinction is that the Nightfall Edition has been equipped with a turbocharged engine. It uses a 1.6-liter, four-cylinder turbo engine that can make 175 horsepower and 195 pound-feet of torque. Kia has paired that engine with a seven-speed quick-shift DCT transmission so it can be responsive and exciting to drive.

In contrast, the S and the LX run on 2.0-liter, four-cylinder engines that don't have turbochargers. These engines can make a decent amount of power, having 146 horsepower and 132 pound-feet of torque, but this isn't quite at the same level as the turbo model. Kia has matched the standard engine with an intelligent variable transmission that can get the job done just fine.

Fuel efficiency is reduced slightly when the Seltos is powered by the more advanced engine. It's only a difference of a few miles per gallon, so to some customers, having more power would be well worth it.

Compare the Nightfall Edition vs EX Trims. What is the difference?

One thing to keep in mind is that the EX goes back to having the regular 2.0-liter engine, so it's not as zippy as the Nightfall Edition might be. It has almost the same technology package as the Nightfall Edition has, but it comes with wireless charging. With all the recent advancements in the field, many devices are compatible with wireless charging, and it can keep cords from getting cluttered around the front console.

The EX doesn't have the black exterior accents that the Nightfall Edition does, which may actually make it more appealing to some customers. Instead of 18-inch wheels, it only has 17-inch ones. The EX does have a power sunroof, which is something that many buyers are interested in. It also has solar control glass to keep some of the summer heat out of the cabin.

In the EX, there are several elements that are associated with higher-end models. They include seatback pockets for storage and illuminated vanity mirrors on the sun visors. The EX has SynTex upholstery on its seats to elevate its style, and its driver's seat is power-adjustable and has two-way power lumbar support.

Compare the EX vs SX Turbo Trims. What is the difference?

The SX Turbo is the most premium Seltos. As its name suggests, it's another trim that uses a turbo engine. Having a more powerful engine can make it a lot more fun to drive the Seltos whether someone is off on an adventure or is heading to work or school. Going along with the athletic vibe, this trim has a flat-bottomed steering wheel like one that might be found in a race car. Further, the SX Turbo is the only trim to have an electric parking brake with auto hold. All the others have a mechanical hand brake.

This trim shines in other ways. Starting with the exterior, it has half chrome door handles, 18-inch wheels, LED headlights, and LED front fog lights. LED front fog lights are far from necessary, but they can be useful at times and can really be noticeable when people take a glance at the SUV. Unlike the EX in which the power sunroof is standard, the SX Turbo has an optional sunroof. This top-of-the-line trim does have a cargo cover to provide some privacy in the back.

Another optional feature is the two-tone roof. This brings the total number of trims that have this option to three, and they're the S, Nightfall Edition, and SX Turbo.

The SX Turbo has the best high-tech components. It uses technology in its safety package, and it's the only trim to have highway driving assist and smart cruise control. Not only can it maintain a set speed, but it can also adjust that speed as necessary. If traffic is slowing down, this program will ensure that the Seltos slows down, too. It can then speed up again when safe to do so. With highway driving assist, the SUV can adjust its speed based on changing speed limits.

Plus, the SX Turbo has an enhanced forward collision-avoidance assist program. It can sense the presence of other vehicles, pedestrians, and cyclists.

Music lovers will appreciate that the SX Turbo has a Bose premium audio system. It has eight premium speakers, along with speakers lights that can pulsate and change color with the music. This is something fun that can bring a smile to one's face and enhance the overall driving experience.

In addition to the 10.25-inch touchscreen, the SX Turbo has a seven-inch LCD driver information cluster behind the steering wheel. It looks modern and provides important information about how the vehicle is doing. A final thing is that the SX Turbo has an auto-dimming rearview mirror. It knows when bright lights are shining into it, and as a result, it can dim so that the driver doesn't have to deal with so much glare.

The good news is that all of the trims are fairly close together in price. Unlike with other models, there's not a huge range of prices, and that's because Kia has worked hard to make the Seltos a budget-friendly vehicle.

When all factors are considered, the EX rises above the others. No, it doesn't have the turbo engine, but it can still handle itself well. It also has the larger touchscreen, navigation, a more comprehensive safety suite, wireless charging, and heated front seats. These can all attract attention from customers looking to be safe, stay comfortable, and take advantage of convenient amenities. The EX is the only one to have a standard power moonroof, which is something to note as well.

If having greater horsepower and torque really matters to a potential buyer, then of course he/she would look into the Nightfall Edition and SX Turbo. The upgrades associated with the SX Turbo might not be worth it to someone on a tight budget, so the Nightfall Edition would be the one to recommend if performance is a key factor.