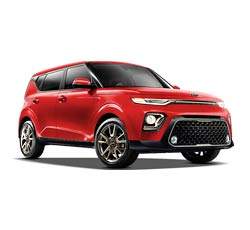 Compare the 2022 Kia Soul Trims - LX vs S, GT-Line vs X-Line, Ex and Turbo. What is the difference between them?

The Kia Soul has been around for over a decade, and it's made its mark as a funky crossover that's practical while being stylish and unique. For 2022, Kia has included six trims in the lineup, starting with the LX and moving up to the Turbo. The Soul is quite affordable, even as it gets the upgrades associated with the higher trims. This is a main reason why it should be fairly successful in the market. This guide will hopefully help prospective customers determine which trim would be the best choice.

Compare the LX vs S Trim Levels. What is the difference?

These two trims have the same bold exterior. They have black radiator grilles, multi-focus reflector headlights, and C pillar garnishes. They both have 16-inch wheels, but the LX has steel ones and the S has alloy wheels.

What's really impressive about the larger touchscreen is that it includes navigation. Usually with other vehicles, navigation is installed on premium trims, so it's quite generous that Kia has given the S trim this feature. In addition, the S has SiriusXM Satellite Radio, HD radio, dual USB charging ports, and wireless charging. The LX may not have all of those components, but it still has many attractive ones. They include one USB port, Bluetooth, Android Auto, and Apple CarPlay.

The LX and S both have remote keyless entry for convenience. On the S, the system is enhanced with a smart key system and push-button start. This means that the key doesn't need to be taken out in order to drive. The S also has dual-zone automatic climate control instead of a manual system.

In regards to seating, both trims have cloth seats, but there are small differences. The LX has woven cloth seats, while the S has premium tricot cloths that are a little nicer. Then, the S has a power-adjustable driver's seat that can move in ten ways and has two-way power lumbar support.

Safety is another area where the S has the advantage. That's because it comes standard with driver-assist technologies that are only optional on the LX. These technologies include forward collision avoidance assist, lane keeping assist, lane change assist, blind spot monitoring, and rear cross-traffic collision avoidance assist. All of these systems can help the driver stay aware of other vehicles and stay out of harm's way. Plus, there's driver attention warning, which can alert someone if it seems like he/she isn't concentrating on the road.

Compare the S vs GT-Line. What is the difference?

The GT-Line feels more athletic in many ways. It has a sport-tuned suspension that can lead to enhanced handling. However, it has the same type of engine as the S and LX. The engine is a 2.0-liter model that can deliver 147 horsepower and 132 pound-feet of torque. This isn't an incredible amount, so it definitely helps that the GT-Line has the firmer suspension.

There are several exterior accents that the GT-Line benefits from having. It has a hot stamping type front grille, special front and rear fascia, red accents on its side sills, and a silver skid plate in the back. Its side mirrors have a gloss black finish, and it has front fog lights. Two other things that are noticeable are the GT-Line's 18-inch alloy wheels and power sunroof.

Its cabin has some different features than the ones in the S. The GT-Line has a D-shaped leather steering wheel to add to its sporty nature. That steering wheel, along with the gear shifter, are wrapped in leather. Kia has given the GT-Line some convenient features, which are a 12-volt power outlet, lights integrated into the sun visors, and a dual-level cargo board. One interesting thing is that the GT-Line goes back to having a manually adjustable driver's seat.

Compare the GT-Line vs X-Line. What is the difference?

The GT-Line and X-Line have the same exact starting price. As such, they have similar features, but of course, they don't all line up perfectly. It's hard to say whether one is the better choice, so it's best to point out how they differ.

In terms of style, the GT-Line has more aggressive elements. The X-Line goes back to having a black grille, and it has silver outside mirrors instead of black ones. The X-Line has 18-inch wheels like the GT-Line does, but the details on the wheels are a little different.

Compare the X-Line vs EX Trims. What is the difference?

To be honest, it's a bit confusing to keep track of which trims have what. That's because with most other vehicles, the features build upon each other. With the Kia Soul, there's a bit of bouncing around. For instance, the GT=Line has a dual-level cargo board, which the X-Line doesn't have but the EX does. The same thing goes for a 12-volt outlet. Plus, the S, GT-Line, and EX all have premium tricot cloth seats, while the X-Line has the same woven cloth seats that are seen in the base trim.

That being said, the EX does have a cargo cover for privacy, and it has heated front seats and rear adjustable headrests. It also has a power-adjustable driver's seat, like what's seen in the S trim.

The EX does not have a sport-tuned suspension, but it does have an enhanced grille. In addition, it's been upgraded by having heated side mirrors and a power sunroof. That sunroof can make a big difference to those who like having natural light stream into the cabin and want to open things up to have some extra fresh air. While the X-Line has 18-inch wheels, the EX has 17-inch ones.

One thing that people will really appreciate is the EX's remote start function. The button to turn on the engine is located right on the key fob, and it's so convenient to use. When it's cold or hot outside, it can come in handy because the cabin can get to a more comfortable temperature before everyone gets in.

In the back seat, the EX has an armrest. It's built into the center seatback, and it comes with a cup holder, too.

Compare the EX vs Turbo. What is the difference?

The main thing that separates the Turbo from all the rest of the trims is its engine. It runs on a turbocharged 1.6-liter engine as opposed to a 2.0-liter engine that doesn't have a turbocharger. The difference in performance can be noticeable to even the average driver. The turbo engine produces 201 horsepower and 195 pound-feet of torque, which is much better than the 147 horsepower and 132 pound-feet of torque that's generated by the standard engine.

With the Turbo trim, there's a seven-speed dual-clutch transmission. This type of transmission is commonly seen in sporty vehicles, and it can be very responsive. The EX, like the lower trims in the lineup, has an intelligent variable transmission that offers a driving experience that's smooth if not necessarily thrilling. Kia brings back the sport-tuned suspension on the Turbo trim.

When comparing the safety systems of the EX and Turbo, there are many similarities. It's great that Kia decided to give all the trims so many driver-assist technologies. The Turbo, though, does stand above the rest with its pedestrian detection and smart cruise control.

Pedestrian detection works in conjunction with the forward collision avoidance assist program, and it can prevent certain types of accidents. Smart cruise control is convenient to use on the highway. If traffic is light, it maintains a set speed. When anything causes the leading vehicle to slow down, then the Soul can slow down appropriately. It can then speed up again when safe to do so.

A head-up display is integrated into the Turbo. This display is shown right behind the steering wheel, projected onto the windshield. It provides information about the vehicle so that a driver doesn't have to take his/her eyes off the road while checking on that data. It can show the current speed, any warnings, navigation information, and more.

On its exterior, the Turbo has some unique elements as well as those that are seen on some of the lower trims. Unique to the Turbo are a chrome-tipped center exhaust, LED turn signals integrated into the side mirrors, and a full array of LED lights. LEDs are built into the front fog lights, rear tail lights, positioning lights, and headlights.

Like the EX, the Turbo has heated side mirrors and a power sunroof, along with the same type of front grille. The accents on the outside of the Turbo are more similar to those found on the GT-Line, and these include 18-inch wheels, side sills with red accents, and a silver rear skid plate.

The Turbo is the only trim to have a Harman Kardon sound system, which comes with a subwoofer, external amplifier, and center speaker. There are even lights on the front door speakers and bottle holders that can pulsate to the music and change colors.

Further, the Turbo has some more amenities that make the cabin feel more sophisticated. The heated steering wheel can be nice to have on cold days, the SynTex and cloth seats look athletic and refined, and the LED interior lights add to the atmosphere. The Turbo is the only one in the lineup to have a heated steering wheel, and that steering wheel has the same D-shape as found in the GT-Line. Finally, the Turbo has satin chrome door handles that contrast nicely with the piano black air vent bezels.

It's important to remember that the Kia Soul is an affordable vehicle, especially in comparison with other SUVs and crossovers. Not too much separates the trims from each other, and that's true when looking at their prices as well. The base trim starts out at around $19,000, with the EX costing about $23,500. In between them, there are three other trims.

If budget is going to be the primary factor, then the S would be the one to pick. As the second trim in the lineup, it has an appealing price, and it also has navigation and driver-assist technologies. If someone can afford something that's nicer and wants to drive something with more power, then the Turbo would be a treat. It has the best features out of all of the trims, and it still costs less than $28,000.