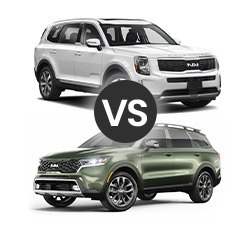 2022 Telluride vs Sorento - How Do They Stack Up? What are the differences?

Kia has become quite the contender in the automotive market. It's now known for making high-quality vehicle that have great value and solid performance. The company makes several types of SUVs, with the Telluride and Sorento being two of them. These three-row models are spacious, capable, and athletic, and they benefit from having a variety of high-tech equipment. Many potential buyers will be considering both of these models, and this overview should hopefully be helpful as they decide which would be better for their needs and preferences.

These models might seem pretty similar in size. When they're lined up right next to each other, though, the difference in length should be apparent. The Telluride measures 196.9 inches from front to back. This is seven and a half inches longer than the Sorento is. Also, the Telluride is about four inches wider and a few inches taller than its counterpart is.

The size differential translates into the Telluride having more interior space. It has an impressive amount of room in its cabin, with a maximum cargo capacity of 87 cubic feet. This is more than what the Sorento offers, which is 75.5 cubic feet. Another difference becomes evident when taking a closer look at the cargo space behind the back row of seats. Behind the third row of the Telluride, there's 21 cubic feet of space for storage. In the Sorento, there's only 12.6 cubic feet of storage space.

Fortunately, things are roomier in the other rows. Second-row leg room is 41.7 inches in the Sorento and 42.4 inches in the Telluride. Their first rows are comfortable as well. Both treat the driver and front passenger to 41.4 inches of leg room.

Regardless of whether the Telluride has front-wheel or all-wheel drive, it has eight inches of ground clearance. This is a decent amount of clearance that many people should be happy with, as it provides enough height for the vehicle to get over obstacles and deal with bumpy roads. The front-wheel-drive Sorento has a ground clearance of 6.9 inches, while the all-wheel-drive version has a higher clearance of 8.2 inches.

In terms of stylings, these Kias are similar to each other. They manage to feel upscale and rugged at the same time, so they'd be ideal for people who want nice vehicles that can handle themselves well when going off the beaten path.

Some trims in the Sorento and Telluride lineups have chrome accents, while others have black accents. Those models with black accents appear particularly durable and have a more aggressive vibe to them.

There are some slight differences when it comes to the exterior features. For instance, the Telluride can have either a power sunroof or dual sunroofs. In comparison, the Sorento can come with a panoramic sunroof. that panoramic version does have two panels, just like a dual sunroof, but those panels are closer together than the panels on the dual sunroof are.

When it rains, the Telluride's available rain-sensing wipers can kick in to gear. Unfortunately, the Sorento doesn't have these types of wipers, which can be convenient when a driver already has a lot of other things to be concerned with.

The Sorento has standard LED headlights, and it can be enhanced with LED fog lights, LED daytime running lights, and LED rear combination taillamps. The Telluride comes standard, instead, with projector beam headlights, and only its higher trims have LED headlights. It does, though, come with LED position lights and LED daytime running lights. It can be upgraded with more LEDs in various places, matching what the Sorento offers pretty well.

18-inch and 20-inch wheels are found on these two types of Kias. If those wheels have a gloss black finish, the appearance of the Kia looks more eye-catching. The entry-level trim of the Sorento only has 17-inch wheels, while the Telluride starts off with the 18-inch wheels.

One engine is offered with the Telluride, and two are available with the Sorento. The Telluride runs on a 3.8-liter V6 engine. It makes a good amount of power, having 291 horsepower and 262 pound-feet of torque.

The standard engine on the Sorento is a 2.5-liter, four-cylinder engine that can make 191 horsepower, along with 181 pound-feet of torque. This level of capability is fine, but obviously, it could be better. If someone wants to have a more exiting experience, there's a turbocharged engine that's available. It has a displacement of 2.5 liters, and it can deliver 311 pound-feet of torque and 281 horsepower.

Every Telluride uses an electronically controlled eight-speed automatic transmission. A Sportmatic sports shifter gives the driver some manual control over shifting, if that's ever desired. Comfort, Eco, Sport, and Smart are the available drive modes. All-wheel drive is an option to consider, too, and that would come with AWD lock and Snow mode.

The top two trims of the Sorento have paddle shifters mounted on their steering wheels. This allows people to make changes to shifting whenever they want to.

In either model, there's the opportunity to get captain's chairs in their second rows. This would drop the Sorento's seating capacity to six, and it would bring the Telluride's total accommodations to seven. Some prefer to have captain's chairs because it can give everyone in the back a bit more space to move around and stretch out. It's great that Kia has given these SUVs second-row seats that are easy to adjust. In addition, the third row can recline and, of course, fold down quickly.

The entry-level trim of the Sorento has cloth upholstery. Most of the rest of the lineup has SynTex, which is a synthetic material. Those trims with SynTex seats also get to have heated front seats and ten-way power-adjustable driver's seats. Two-way power lumbar support is included, too.

The top two Sorento trims have 14-way power-adjustable driver's seats with lumbar support and thigh extensions for extra comfort. They have leather seats to add to their sophistication. In addition to heated front seats, they have ventilated front seats and heated rear seats.

Things aren't exactly the same in the Telluride. Out of its four trims, two have SynTex seats and two have leather. Cloth isn't an option. The top trim can even be upgraded with a premium Nappa leather which feels and looks more refined than regular leather.

Aside from leather-wrapped steering wheels and gear shifters, which mid-level trims have, the top Telluride trims can have heated steering wheels. Further, there can be heated and ventilated second-row seats. The SX trim of the Telluride has a more sporty appearance with stainless-steel pedals.

Likewise, wireless charging is available with the Telluride. It actually comes with three out of the four available trims. The Telluride comes standard with six USB ports in addition to a USB input jack. Higher trims have seven total USB ports.

Kia has focused a lot on safety. Both trims feature driver-assist technologies that can actively keep passengers safe.

Forward collision-avoidance assist is a standard component in both lineups, and it includes pedestrian detection. Cyclist detection is standard with the Telluride and available with the Sorento.

Another thing that these vehicles have is lane keep assist. With this technology, they can sense when they're veering out of their lanes, and if so, they'll issue alerts and will have the potential to correct steering.

The Telluride gets to have blind-spot monitoring and rear cross-traffic monitoring in its entire lineup. If it seems like a driver is about to change lanes or back up at the wrong time, the Telluride can adjust steering or hit the brakes if necessary. These features are found on all trims of the Sorento except for the base trim.

With all the distractions that are present in today's world, it can be easy to take one's eyes off the road for a second. If that happens for too long, one of these Kias can sense it. It would emit an alert so that the driver would refocus his/her attention on the roads.

One other thing that's integrated into the Telluride is navigation-based smart cruise control. This advanced cruise control system can make corrections to speed if traffic patterns have changed, and it can use the navigation program to sense upcoming turns. The SUV could slow itself down if a sharp curve is right ahead. This type of system isn't standard on the Sorento, but it is included with many trims.

These vehicles really are very similar, with a few differences between them. The most notable factor is that the Telluride is the bigger vehicle. Any customers who need more passenger and/or cargo space will want to go with the Telluride, as long as they're comfortable with the relatively lower fuel economy and the higher price tag.

The Telluride starts off with a cost of about $33,400, and its top trim costs $43,300. The starting price of the Sorento is approximately $29,600, in contrast. There are more trim options with the Sorento, and its lineup ends with the X-LINE SX Prestige AWD, which costs $43,190.

In the Telluride, there's the better technology package, at least when looking at the base trims. A few other amenities are included with the Telluride's entry-level trim and not the Sorento's. However, the higher trims of both lineups are very comparable in many ways.

The Sorento should be a great option for people who are satisfied with its six- or seven-seat capacity, and its turbo trims should be able to attract drivers who like the thrill of being on the road.