2018 Land Rover Discovery Sport Pros vs Cons. Should You Buy? 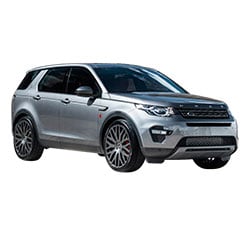 Should You Buy a 2018 Land Rover Discovery Sport? Here Are Some Pros and Cons

Introduced to the Land Rover selection for the 2015 model year, the Land Rover Discovery Sport replaced that aging LR2 as the brand’s compact crossover SUV. It is in many ways a smaller version of the mid-size Discovery, while also borrowing some features from the smaller Range Rover Evoque as well. It’s strengths are the same as those of other Land Rover vehicles: excellent quality, luxury features and effective off-road utility. Drivers looking for a vehicle that excels in those areas in the compact crossover class will find the 2018 Land Rover Discovery Sport as one of their top choices.

The 2018 Land Rover Discovery Sport is still a relatively recent model, so it has seen few changes since its original release in 2014. This year sees one of the biggest ones, with the introduction of a new four-cylinder twin-scroll turbocharged engine for the model. Other changes include a few new cosmetic options for the car, the rest of which remains unchanged.

The Discovery Sport marked a departure in styling for the Land Rover brand, moving away from the traditional boxy and upright - albeit well-decorated - SUVs to a more modern design. It is smoother and more aerodynamic, including such modern touches as a contrast color grille and a sharply angled windshield. However, it is still recognizably a Land Rover, thanks to prominent bumpers and large wheels. The Discovery is Land Rover’s foray into the future, and it certainly looks the part.

The 2018 Land Rover Discovery Sport does not cut corners when it comes to its material quality for the interior. Anything that might be touched is soft and pleasantly textured, and the seating surfaces are nicely upholstered. Chrome, bezeling and inlays abound, contained within a minimalist straight-lines design that Land Rover is known for. If this interior were any nicer, it would be downright decadent.

The interior of the 2018 Land Rover Discovery Sport is not just for show however - it is functional as well. The seats provide a lot of support and cushioning, and the suspension works hard to keep the vehicle feeling placid. The impeccable sound insulation only adds to the comfort of riding or driving this vehicle by filtering out almost all external noise.

The standard suspension on the 2018 Land Rover Discovery Sport is well-cushioned, but the optional Intelligent Dynamics package allows one to squeeze some extra comfort and performance out of it. Using an adaptive suspension, the Intelligent Dynamics system constantly changes the suspension tuning depending on driving style and conditions. That allows the car to offer the best performance while still keeping the passengers nice and comfortable.

The Land Rover Discovery Sport comes with an impressive features list of both standard and optional features. Leather, power seating and a large infotainment touch screen are among the standard features on all Discovery Sport models, while the high end HSE Luxury trim boasts practically all of the advanced amenities available to drivers today.

The 2018 Land Rover Discovery Sport has one of the largest and most convenient cargo areas in the compact crossover SUV segment. With 34.6 cubic feet behind the second row, there is tons of space to stash anything from sports equipment to building materials. The large opening and the tall, boxy layout of the rear of the car make loading and unloading easy, which is something that a lot of SUV drivers will appreciate.

Only a couple of other compact crossovers offer a third row of seating, and even fewer are luxury cars like the Discovery Sport. They are not as exuberantly comfortable as the first two rows, due to the car’s compact size, but can be a great addition for drivers who want the option of seating seven, but don’t do so on a daily basis.

As with all Land Rovers, the 2018 Discovery Sport comes with a standard, always-on four-wheel drive system. For many of its competitors, all-wheel drive is often an add-on feature. However, safety minded consumers will appreciate the across-the-board inclusion of the feature. If fuel economy of the constant all-wheel drive is a concern, there is also an option to disengage the rear wheels during high-traction situations as well.

With both standard all-wheel drive and Land Rover’s own Terrain Response system, the 2018 Land Rover Discovery Sport is just as capable on the trail as its larger siblings. The terrain management system allows you to choose between normal driving and the mud, sand, snow or ice settings, with the throttle response, transmission timing, and steering ratios adjusting to make going through each particular obstacle easier.

While luxury vehicles like the Land Rover family don’t get crash tested by the major agencies due to their lower sales volume, they are still very well equipped when it comes to safety features. A rearview camera and parking sensors are standard on all models, and automatic xenon headlights, blind spot monitors and a surround view camera are options on almost all models as well. A forward collision warning system with automatic braking is also available on the two higher trim levels as well.

The Discovery Sport falls somewhat behind its peers when it comes to fuel economy, even with this year’s upgraded engine. The lack of a diesel option, which some other Land Rovers have started introducing, also puts it at an economy disadvantage compared to many rivals.

The new engine added to the Discovery Sport this year only puts out 237 horsepower in the base model, which is less than last year and feels too weak for the car’s size. There is a 286 horsepower version available as an upgrade on the higher end models which feels more responsive, but it is an expensive addition.

Many of the options available on the Discovery Sport feel very expensive given what they contain. Some features that one would expect to come standard on a car in this price range, such as heated seats, are part of an expensive options package even on the highest trim line.

The competition for the 2018 Land Rover Discovery Sport consists of other luxury compact SUVs, including popular vehicles like the BMW X3 or the Volvo XC60. The BMW X3 is slightly more fun to drive on paved roads, though it lags behind the Discovery Sport in off-roading. It lacks the optional third row, however, making it less versatile. The Volvo XC60 also does not have a third row, though it is just as nice inside as the Land Rover Discovery Sport and is also capable off-road. It is not nearly as fun to drive however.

For a luxury compact SUV, the 2018 Land Rover Discovery Sport is very practical. It offers drivers up to seven seats of seating, a spacious and easy-to-use cargo area and effective on-road and off-road driving manners. In addition to all of that, it also brings world-class luxury and cutting-edge features into the mix, making it an excellent all-around option.

Save Money on a 2018 Land Rover Discovery Sport:
Are you Shopping for a New Vehicle? Find the Best Deals with "Free - No Hassle" Prices Quotes.