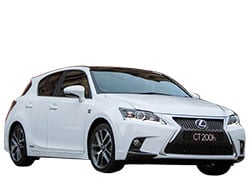 The 2016 Lexus CT 200h might as well be the least covered American green car. However, despite its relatively low media profile, this car has remained a leading US market selling green auto, outpacing such models like the BMW i3, Volt, and Leaf in sales.

The 2016 CT 200h is still standing alone as a luxury compact luxury hatchback running a standard electric/gasoline hybrid powertrain. For 2016, changes made on the CT 200h are largely limited to infotainment upgrades.

The 2016 Lexus CT 200h power comes from a 4-cylinder 1.8-liter gasoline engine that has been mated to a battery pack made from nickel-metal hydride and a pair of electric generators/motors.

Reviewers think the car performs fairly well. There is plenty of power in most of the driving situations.Test drivers are very impressed with the sharp and poised handling upon acceleration that also gives sharp steering.

For a hybrid car, the Lexus CT 200h handles quite respectably. A number of test drivers have noted that in the CT 200h Sport mode you will get a rapid throttle response.

The hardware of the 2016 Lexus CT 200h performs admirably. Compared to the majority of hybrids, it feels relatively agile.

The CT 200h’ fuel economy ratings are impressive. The Lexus CT is also known for keeping cost per mile low through the usage of regular unleaded fuel. As a matter of fact, it is not easy to find the same fuel cost per mile of the 2016 Lexus CT on another version of a premium vehicle.

The interior of the 2016 Lexus CT 200h, according to a number of auto writers is built using top-notch materials.

The infotainment system in this car utilizes a special mouse-like interface known as Remote Touch. Auto journalists think it's a very cool and clever system.

The 2016 Lexus CT Hybrid has been designed to seat 5. Reviewers are in agreement that the car’s front seats are quite comfortable, and they provide plenty of support when you want to engage in some spirited driving.

The CT 200h has been awarded the highest possible Top Safety Pick Plus rating by the Insurance Institute for Highway Safety.

Being a 2016 model, there is of now no reliability data regarding this vehicle and neither has there been any NHTSA safety recalls.

To avoid overpaying on a new car, shop prices online first. Get up front pricing before you walk into a dealership. We recommend the following free services; Car Clearance Deals, Edmunds, CarsDirect & MotorTrend.
These free services will offer you the lowest prices and supply you with multiple competing price quotes. You will know the best price before you visit the dealer.

Critics have expressed their disappointment with the poor acceleration and weak engine of the Lexus CT Hybrid. Some have also noted its slow response. Most of its rivals handle better and are quicker.

Several test drivers have reported that the 2016 Lexus CT 200h steering and handling comes at the cost of having a firmer ride. The brakes also feel somewhat inconsistent perhaps due to the efforts made into making the regenerative anchors of the hybrid to behave more like a sports vehicle.

Some reviewers have reported that the cabin materials of the CT Hybrid aren’t up to the class and standard normally seen in other models of Lexus. They say the cabin is really a smattering of some low-rent materials, perhaps a concession due to the relatively low price of the car.

It has been noted by auto reviewers that the back-seat legroom is deficient.

Although competing automakers are beginning to put up a spirited fight, the Lexus CT 200h has maintained its position as a quality compact 2016 luxury hatchback with great buyer value. If you are a buyer looking for a classy and premium compact car that offers affordability, top-notch safety and value, then you ought to give the 2016 Lexus 200h some serious consideration.
2016 Lexus Buying Guides: