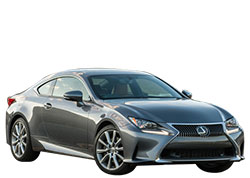 The year is starting off on a good note with the rumored 2016 Lexus RC 300 finally becoming a reality. Lexus lovers will be treated to an all-new body design, unrivaled streamlining, and chic spoilers, which critiques may argue is nothing different from the 2015 RC 300. Nonetheless, we are promised the same impressive handling on the road and remarkable fuel economy from the base coupe to the all-wheeler.

Equally competing for the buyer’s purchase power is the 2016 Audi A4 closing the gap fast with outstanding specs under the hood. As price tags near cancel out, these two machines are left to argue their case by giving something different than what was offered by their predecessors. Which coupe will stand out the more?

The base coupe handles a convincing 22mpg in city and 32mpg in the highway. It’s an obvious improvement from the previous 19/28mpg delivered by the 2015 RC 300 model. Lexus was clever in this revision, which is going to trample the 2016 Audi on highway cruise—32 mpg to 31mpg.

2016 Lexus RC 300 comes out as a 2dr Coupe for the base model but with the additional option of an all-wheel-drive. Under the hood will be a six speed automatic gear box with less talk of a manual transmission choice for those who like to be hands-on, literally, with their car. Comparing to the 2016 Audi, the option of the manual is available on their AWD Man Prestige trim, not forgetting that all trims will spot only 4dr—an area the 2016 Lexus RC 300 will face major competition on.

In addition to the best fuel economy on highways, the 2016 Lexus RC 300 will also have a larger fuel tank compared to the Audi. Both vehicles will run on gasoline, with the Lexus filling up to 17.4 gal above Audi’s 16.1. Though the critics may not see this as much, it still makes a difference gaining an extra mile on the road before the next refill.

The automatic, shiftable 6-speed transmission definitely needed roaring power to complement, and a V6 cylinder engine was the answer. No wonder so many test-drivers marveled at the 2015’s Lexus RC 300 to pick up speed fast while maintaining nimble handling. The same signature engine force was maintained on this new 2016 Lexus RC 300 and tramples over Audi A4 2016’s mere four-cylinder arrangement.

There will be a variety of colors for everyone to choose from for their car’s outer body look. The Lexus 2016 RC 300 will spot hues like:

For those who loved the sturdy body design in the 2015 RC 300, the same style has been maintained and a bit more gloss added to make it gleam on the road.

Even before diving to the ‘why?’ test drivers already vote the 2016 Lexus RC 300 as a very relaxed vehicle to handle. The interior is clothed in black, playa, Rioja red, flaxen or stratus gray leather/leatherette. Both front and back rooms are quite spacious—in fact more spacious than the Audi A4 2016 and there is measurement data to back that.

The 2016 Lexus RC 300 will feature both cruise control and electric steering options. One more thing to note about the steering is the tilt/telescopic engineering which when combined with the rear view camera makes packing or getting out of tight spots piece of cake. All Audio control buttons are in-built on the steering giving the driver maximum control on the road while tuning into their favorite music or radio station.

8) Luxury on the Road

The 2016 Lexus RC 300 is fitted with top end safety features like the 4-wheel ABS braking system complemented by emergency break assist. Lighting system features light sensitive headlamps with auto-delay tweaks and constant daytime lights. The coupe has an in-built pressure monitor for the tires, and both traction & stability control features to keep the vehicle steady on the road. Other safety features worth noting are:

Right now there are plenty of tweaks to play with inside the 2016 Lexus RC 300. But there is more interest to the driver’s mind like dual climatic controls, rear lamp defogging system, interior air filter and a rear tire mounted inside to maintain the sleek and lavish look of the exterior. There is a universal remote controller as well to manage garage doors or security systems when driving in or out of one’s compound.
Buying Tip:

For the Lexus lover who was opting for a new exterior design, this is bound to be a disappointment. The 2015 look is pretty much what you get on this new one, and very abysmal changes if any.

From the base to the all-wheeler, the signature trim is automatic without options for the manual. The Audi A4 2016 overtakes the Lexus on this one by providing a manual option on one of its trims.

Just like the body design, the 2016 RC 300 Lexus is still spotting the same colors its predecessor had. This will be a sad shocker for the eager consumer who was hoping for a different taste this time.

The 2016 Lexus RC 300 is a worthy buy over the Audi A4 2016 for some notable reasons. It already provides better handling and fuel economy and tank capacity on the road. There is a new technology for the Lexus lovers as well like the speed-sensitive volume controller and premium sound system that was an optional feature in the 2015 Lexus RC 300.
2016 Lexus Buying Guides:

Compare Local Dealer Prices
Find the Best Deal
Save Thousands on a 2016 Lexus RC 300! Start Your Own Online Price War