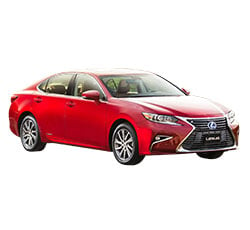 The Lexus ES 350 is a mid-size luxury sedan that has been produced and sold by Lexus since the 2005 model year. The car most recently went through a major upgrade with the 2015 model year when it received an interior and exterior facelift. The ES 350 is the most powerful and popular sedan ever produced by Lexus.

Overall, the 2017 Lexus ES 350 is very similar to the 2016 model year. The main changes to the car include a few interior style enhancements and a new GPS system. The new GPS system in the 2017 model year allows you to integrate your preferred smartphone GPS system onto the car’s display, which can provide you with more accurate and efficient directions.

The 2017 Lexus ES 350 comes with one engine option, which is a V6, 3.5 liter engine that produces an impressive 268 horsepower and is a powerful base engine option compared to other cars in its class. The sedan also comes standard with front-wheel drive.

Despite the strong engine performance, the ES 350 also has very strong fuel efficiency ratings. The 2017 model year receives an estimated 30 mpg when driving on the highway and 21 mpg when driving in the city.

While the ES 350 may be known for its style and luxury, it also comes with a range of built in safety features. For starters, the base model will come with a backup camera, lane departure warning, side-mounted airbags, and rear airbags. The car also has the same anti-lock brakes and traction control that has helped it to have a high safety rating for years.

The 2017 Lexus ES 350 has many features that help to make it one of the most comfortable cars on the road. It has a built in stability control system, which makes it a smooth ride even on rougher roads and at high speeds. Further, the car comes with auto climate control, multi-climate control, and a sunroof.

5. Base Technology Features are Free

The ES 350 also comes standard with a range of free technology upgrades. The ES 350 has an easy to use Bluetooth system, USB ports in the front and back of the car, a touchscreen display, an adaptive cruise control system, and a variety of different controls on the steering wheel.

The 2017 Lexus ES 350 also has a new GPS system that is gaining popularity with drivers. While Lexus used to operate solely with their own GPS program built into the car, drivers can now integrate their preferred smartphone GPS system onto the display, which can provide more accurate and timely directions and road conditions.

Historically, the ES 350 has had a boring and dull exterior. However, this has changed over the apst few years as Lexus has aimed to give the car a more sleek appearance. In recent years it has been given a more athletic body, LED headlights, and an updated grille, all of which make it appear more stylish compared to older models.

Lexus has commonly been a leader when it comes to interior finishes and the ES 350 continues that trend. The car will come standard with leather upholstery, but it can be upgraded to the new NuLuxe upholstery, which is more comfortable and durable. Further, each seat can be upgraded to have both heated and ventilated seats, which is ideal during hot and cold weather.

The 2017 Lexus ES 350 has over 15 cubic feet of cargo space located in its trunk, which is more than most cars in its class. Furthermore, the car will comfortably fit five passengers who will enjoy the extra leg room that has come with the recently updated model.

The 2017 Lexus ES 350 is also well regarded for having a top audio system. Those that are willing to pay for the higher tech package will enjoy the HD radio, 8 Bose speakers located throughout, and additional voice command controls that can be used and synced to your phone.

Overall, the 2017 Lexus ES 350 comes with less options than other cars in its class. Unlike some of the competing mid-size luxury sedans, the ES 350 only has one trim level and one engine option. However, many of the features that are available in higher trim levels with other cars can be purchased with technology upgrades.

For the third straight year, the Lexus ES 350 will use the Remote Touch interface display. This interface display does all of the tasks that one would expect, but it often requires additional steps and can be considered distracting to a driver.

Drivers that are located in areas with a lot of snow may pass on the ES 350 simply due to the lack of all-wheel-drive. The car comes standard with front wheel drive, which may not suffice in some markets.

Those that are considering the 2017 Lexus ES 350 will also consider the Lincoln MKZ, Audi A4, and Acura TLX. Overall, the ES 350 does compare well to those cars. Its base engine option is a little bit more powerful, has strong fuel efficiency ratings, and has many of the same base luxury and tech features. Those that are looking for more fuel efficiency may choose the Lincoln MKZ, which has a hybrid option.

In conclusion, the 2017 Lexus ES 350 has many of the same features that it had with the 2016 model year. The ES 350 has been one of the best selling luxury mid-size sedans on the market for the past five years and the trends is likely to continue due to its positive reputation.