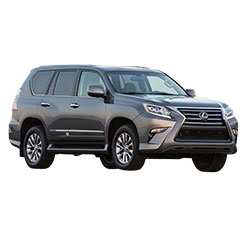 The 2017 Lexus GX 460 has seen better days. While this luxury midsize SUV keeps up the SUV end of the bargain, it looks less attractive when compared to the competition that has moved on to new innovations. It can go off road, pull a good-sized boat, and pack seven people in with plenty of cargo, but these are the minimum expectations for this class of vehicle.

There isn’t much that stands out as new in the Lexus GX 460 this year. As one reviewer noted, it feels like a throwback Thursday midsize SUV. However, the 2017 edition of the GX 460 does bring some incremental changes, adding new technologies that are becoming standard in other vehicles of this class. The basic chassis, though, is still the same as the Toyota 4Runner.

If you plan to go off road, the 2017 Lexus GX 460 can still go there, unlike the smaller crossovers that dominate the SUV market today. It has the height to clear small boulders and the four-wheel drive to handle rough terrain. It’s also big enough to pack in a half dozen people and their gear if you’ve got adventures planned.

Even though the infotainment system on the 2017 Lexus GX 460 doesn’t look like the latest technology, it’s easy to use and not complicated. The buttons and touchscreen are well labeled and the menus are common sense. It certainly beats overdone technologies that claim to be cutting edge but have difficult user interfaces.

The Lexus GX 460 has the spacious interior that you’d expect from a midsize SUV. It seats seven in three rows, and the back row is great for children. If you’ve got a big family or group of friends, the GX 460 has room for everyone.

A new bonus with the 2017 Lexus GX 460 is second row captain’s chairs. With these chairs installed, your back seat passengers will ride in the comfort of the front seats.

Another selling point of the 2017 Lexus GX 460 is the weight it can pull if you’re looking for a vehicle to take on long road trips with a boat or car in tow. It does well in the role it was designed to fill.

The 2017 Lexus GX 460 is a vehicle that’s had its problems and kinks worked out of it over the years and has the same quality workmanship as other Toyota vehicles. Reliability is one of the things sacrificed when new technologies and designs are adopted. Sticking to the tried-and-true does have its advantages.

The 2017 Lexus GX 460 has many of the collision avoidance and warning technologies that are becoming standard in the luxury vehicle market. A blind spot monitoring system with rear cross-traffic alert helps avoid unpleasant surprises on the road. The GX 460 is also equipped with a lane departure alert system that will give you a warning if you drift over too far.

The Lexus GX 460 can handle slippery conditions and bad weather thanks to its handling and size. If you need to commute in wintry weather, it may be a better choice than a smaller vehicle.

The 2017 Lexus GX 460 has 64.7 cubic feet of cargo space, which should be all you’ll need for weekend excursions and sporting events, even if you’re bringing a full load of people with you.

The Lexus GX 460 has gas mileage that you’d expect from a midsize SUV more than 10 years ago. While the competition has been finding ways to at least marginally improve their fuel economy with more efficient engines and hybrid options, the Lexus GX 460 continues to struggle to reach 20 mpg on the highway. If fuel economy is important, you may want to consider other vehicles.

The Lexus GX 460 has a powerful V8 engine, but in this heavy of a vehicle the acceleration is sluggish at best. The SUV handles like a truck, so don’t expect a smooth ride when taking corners. If you’re looking for something maneuverable, there are other SUVs to choose from.

3. The Interior Isn’t Decked Out

Compared to other luxury SUVs, the 2017 Lexus GX 460 seems to barely make the grade as a luxury vehicle in terms of the interior. The materials used are average and the interior design feels outdated.

The Lexus GX 460 has fallen behind the pack, but doesn’t give the buyer a discount to make up for it. Thus, it only makes sense for those who are loyal to the brand or who prefer an older style midsize SUV. Lexus has managed to keep up with the must-have new safety technologies, but that’s about all.

The 2017 Lexus GX 460 fails to get ahead of the pack of luxury midsize SUVs, but its failing is simply a matter of not keeping up with the latest technology and engineering. It’s a solid SUV able to go off road or carry a large family on long road trips with a boat in tow behind it. You’ll get this rugged SUV function with the higher quality interior and technology of the luxury market.