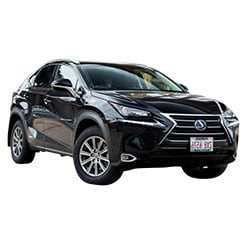 Should You Buy a 2017 Lexus Nx 300H? Here Are Some Reasons For and Against

If you are in the market looking for a new crossover SUV, the new 2017 Lexus NX 300H might pique your interest. This car gives you a pocket-friendly and classy path to owning a Lexus. NX300h is the only hybrid model amongst Lexus luxury-subcompact crossovers with definitive features that puts it on a pedestal. However, what niche does it dominate in the auto industry and how does it rank among its competition? This review provides several cogent reasons why it is a best-buy and some reasons why it may have no appeal to some people.

The 2017 version of the NX 300h model from the reputable Lexus car manufacturer brings new features to the table such as all-wheel-drive-only drivetrain. Also, there is a new Scout GPS Link navigation application that is standard for this model.

The 2017 Lexus NX 300H has an MPG rating of 31 in combined driving mode. This is much better as compared to all the other all-wheel-drive brands such as the RDX which has 22mpg, X3 with 24 mpg and MKC having an mpg of up to 22. The overall mpg return of the NX 300h hybrid is 29. This car is therefore remarkably fuel-efficient, especially in busy urban centers.

During its testing, the 2017 Lexus NX 300h received a very high rating from the Insurance Institute for Highway Safety. Optional features such as forward collision warning system and auto emergency braking were branded 'advanced' in the agency’s tests. Its crash test performance results, as well as rollover resistance, were positive and better than most compact crossover SUV’s. Further safety features housed by the NX300 are the rearview camera, blind spot warning, and a rear cross-traffic signal.

The Lexus Company has focused on restyling the recent models of the NX 300h to feature sharper edges and trims, creases and a less-dominating spindle-grille on the front like in the other models. The 2017 Lexus NX 300H is a bold expertly-built luxury SUV that commands attention wherever it goes. 17-inch aluminum wheels, illuminated door handles and LED headlamps with additional day lights are other exterior features that significantly contribute to its clean exterior styling.

Among the most exciting aspects in the 2017 Lexus NX 300H is that there are no trade-offs between its driving experience and its exceptional gas mileage. Whether it drives on the electric mode or gas, the acceleration is quite potent making it an excellent car for intermittent city driving. The NX 300h offers a subtle balance between its driving experience and driver indulgence.

The ride quality of the 2017 Lexus NX 300H is firm with an active suspension that works well on bumps. At high speeds, particularly on the highway, this car feels stable and settled, hence reducing the need to use more effort and concentration to keep it on course.

The aggressive styling of the 2017 Lexus NX 300H does not only end at the exterior of the car but also extends into the cabin. The center of the dashboard is fitted with an ergonomic control panel that stirs up the NX 300h’s grille. All the passengers have sufficient leg space and are supplied by top notch upholstery. The cabin is simple and user-friendly unlike some competing SUV’s crammed up with overbearing tweaks.

This Lexus model comes only in one trim level that is served with several excellent features. Outstanding tweaks in this trim level include a Scout GPS link application for maneuvering and power-folding steering wheel. There are also additional safety features that come with it such as the blind spot monitoring, 18-inch wheels, automatic wipers and cross-traffic signaling systems. An intuitive Parking Assist is a handy tool in this package alongside 2017 Lexus NX 300H cruise control and a lane change warning.

The 2017 Lexus NX 300H features a hybrid powertrain that works with both gasoline and electricity. At the core of the vehicle is a 2.5-liter 4-cylinder engine that has three electric motors. A nickel-metal hydride cell supplies the necessary electric power for the hybrid mode. These two systems put together yield 194hp. Its acceleration is also commendable for a hybrid car as it goes from zero to 60mph in 8.4s.

Due to the hybrid system, greenhouse gas emission from 2017 Lexus NX 300H is negligible making it a green car. A high fuel economy recorded from an NX 300h also contributes to the car’s eco-friendliness.

As compared to its competitors such as BMW X1 and Mercedes GLA250, the 2017 Lexus NX 300H provides the most comfortable seats for both the driver and passenger. In the F sports model, a supportive bolstering makes the seats very functional.

The cargo space in this luxury crossover SUV is 16.8 ft3 when the rear seats are folded, which is not only a decline from the previous NX 200t version but also incompetent among other SUVs.

This isn’t notable in the day to day stop-and-go urban drive. However, when the acceleration goes beyond the urban speeds, the whirring is quite dominant within the cabin.

The car is quite heavy, (4000 lb without curb weight) and the 194 hp output is just not sufficient to haul the whole load, hence the need for high revving at high speeds.

The use of a trackpad when most of its competitors have touchscreen multimedia interface is a major drawback for this car.

The car faces competition from other crossover luxury SUVs but comes out top in terms of interior comfort, fuel efficiency, and the hybrid technology. It is also cheaper than rivals like the BMW X3 and Mercedes GLA250. However, if you prefer cruising for longer distances, a turbo-diesel engine found in brands like Land Rover Discovery Sport or Audi Q5 hybrid would suffice.

The 2017 Lexus NX 300H is a compact SUV worth considering because its comfort, styling, and fuel efficiency perks are unmatched. Though it may have an insufficient cargo space and an inadequate multimedia interface, its functionality is great for city drives. Besides that, the aggressive signature spindle grille and new LED headlamps will turn a few heads as you drive in a 2017 Lexus NX 300H.