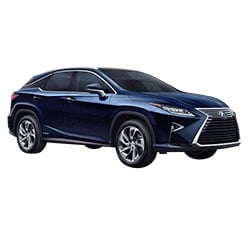 The Lexus RX 350 has been one of the most popular mid-size luxury SUVs on the market ever since it was first introduced with the 1997 model year. Since it has been unveiled and sold, it has been the best selling SUV in its class. The SUV is currently in its third year of the current generation, which is the fourth generation overall.

Overall, the 2017 Lexus RX 350 is pretty similar to the prior model year. The most significant difference is the introduction of the Sport trim, which provides some additional speed and power features. Furthermore, many of the safety features that were upgrades with the 2016 model year now come standard.

Similar to other vehicles produced by Lexus, one of the top features of the 2017 Lexus RX 350 is the interior style. The SUV comes loaded with top of the line finishes including comfortable leather seating throughout, a leather steering wheel, and heated and ventilated seats. Many of the luxury finishes that come in the base model are additional upgrades with competing mid-size luxury SUVs.

One of the top rated features of the 2017 Lexus RX 350 is the steering and handling. The SUV is considered to have one of the best steering and suspension system, which makes it easy and comfortable to drive in all conditions. The SUV has built in system allowing it to isolate road vibrations, which adds to the comfort.

While the 2017 Lexus RX 350 has a strong engine, it still gets pretty good fuel efficiency. The base model of the RX 350 gets around 28mpg when driving on the highway and 21mpg when driving in the city. However, when it is coupled with the AWD system, the fuel efficiency results tend to drop around five percent.

The 2017 Lexus RX 350 experienced a big improvement when safety features introduced last year were made standard, as opposed to upgrades. Drivers today will all receive rearview cameras, brake assist, lane departure warning, and blind spot monitoring as standard features. Overall, this has led to a very high safety rating for the SUV.

Overall, the horsepower and performance of the SUV is sufficient for most drivers. The V6 engine produces over 300 horsepower. It also has an eight-speed automatic transmission, which makes it very easy to drive for even novice drivers.

Cargo space in general in the RX 350 is not great, but the SUV does come standard with a very wide cargo bay. This is ideal for any situation where loose goods, such as groceries, need to be transported.

While the 2017 Lexus RX 350 does not come standard with the top audio system, it is an upgradeable feature. Those that upgrade will enjoy the HD radio, audiophile speakers, and improved music display, all of which rivals the top audio systems available today.

The 2017 model year should also be popular with those that enjoy tech features. The SUV comes standard with a variety of generous features including a panoramic sunroof, heated seats and surfaces, Bluetooth capabilities, and a touchscreen display that has the ability to control many aspects of the SUV.

Similar to the prior model year, the 2017 Lexus RX 350 has excellent smartphone integration ability. By simply plugging your phone in the USB, you will be able to integrate your phone instantly. One of the top uses of this is the GPS, which allows you to display your preferred phone GPS onto the SUV’s display.

The 2017 Lexus RX 350 is also popular with drivers that are looking for more towing capacity than is normally found in mid-size SUVs. The 2017 model year hast he ability to tow over 3.500 pounds, which is more than a few of the competing SUVs that can barely tow 3,000.

One of the biggest detractors about the 2017 Lexus RX 350 is the fact that the cargo space in the SUV is less than what many would want. There is about 18 cubic feet of storage located behind the two rear seats, which is less than the competitor average of around 22. Further, the SUV only has one back row of seating while some competitors can seat six people.

2. Technology and Interface is Considered Distracting

While the user interface in the Lexus has a lot of tech features that can be helpful, those that are not used to it have complained about it being too hard to use. Others have stated that its brightness can be distracting while driving.

3. Acceleration in Base Model is Poor

While the overall top speed and acceleration is sufficient for most drivers, those that are looking for more performance out of their SUV may want to look elsewhere. The 3.5-liter engine has a 0 to 60 speed of around 7.4 seconds, which is slower than its top competitors.

Overall, the 2017 Lexus RX 350 does compare well to its competitors. The main advantages that it has compared to its top rivals, the BMW X5 and Acura MDX, are its interior finishes and tech and safety features, many of which are available for free with the RX 350 but are considered upgrades in other SUVs.. However, many do prefer the competitors due to the fact that they have more acceleration power and cargo space.

In conclusion, the 2017 Lexus RX 350 will likely continue to do well in sales. Consumers that are loyal to the brand will enjoy the safety, style, and reliability that it provides. Furthermore, the newer Sport trim may appeal to some drivers that are looking for speed and additional style.