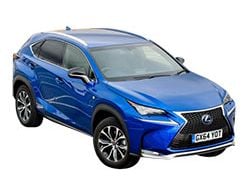 What 2018 Lexus NX Trim Level Should you Buy? What is the Difference Between the Trims?

Once a brand focused on comfort and luxury, Lexus has been revamping its crossover and SUV product line in order to make it sportier and more exciting, taking aim at a new generation of younger luxury buyers.

The Lexus NX is among the newer addition to the Lexus lineup, and represents the turning point in the brand’s crossover SUV philosophy. It is pretty agile and sophisticated, though some critics do point out too many similarities with its mass-market Toyota RAV4 counterpart, with which it shares the basic underpinnings.

The 2018 Lexus NX is one of the first major updates for this new model that debuted in 2015. After almost no changes in 2016 and 2017, this year’s model updates some of the car’s styling, improves the standard safety and infotainment equipment, and even changes the names of all of the car’s trim levels to the new 300 designation.

Like most Lexus vehicles, the 2018 Lexus NX does not follow a standard trim progression. Instead, the three different trims are differentiated by their mechanical abilities. The base NX 300 model serves as the standard model that most buyers are likely to gravitate themselves towards, while the NX 300h offers an alternative hybrid powertrain for better fuel economy.

The last trim level is the NX 300 F Sport, which adds several performance features and upgrades for a slightly sportier take on this compact crossover. All of the trim levels then come with a variety of upgrade options and packages to help buyers customize their preferred car.

In this guide, we go over all of the differences between the three models, as well as the standard and optional equipment that they offer.

The standard Lexus NX is a solid luxury compact crossover that is slightly less expensive than most other vehicles in its class - a fact that does not keep it from offering a good selection of standard features. The basic features include a leatherette interior, 17-inch alloy wheels, dual-zone climate control, a leather-trimmed steering wheel and gear shifter, power front seats, the Lexus Safety System Plus, and an 8-inch touchscreen infotainment interface with Bluetooth, USB, voice controls, and an 8-speaker sound system.

Lexus Safety System Plus is the active safety bundle that has been added to the standard features of the Lexus NX this year. It includes adaptive cruise control, lane departure warning, automatic high beam control, and a forward collision warning with automatic emergency braking. The car also comes with a rearview camera as well, and there is a choice between front-wheel and all-wheel drive.

In addition to those basic features, the Lexus NX 300 offers a full selection of very extensive packages and a good list of individual a la carte options. The two main upgrade packages somewhat correspond to trim upgrades on other vehicles.

The Luxury Package takes it to the next level, including all of the above features as well as an upholstery of perforated leather, wood grain interior accents, a heated steering wheel, and rain-sensing windshield wipers. Other major packages include the comfort package, which is a more limited version of the Premium package, bundling the heated and ventilated front seats, blind spot monitors, and auto-tilting outside mirrors.

The Navigation package adds a navigation system with a 10.3-inch touchscreen display, a 10-speaker Lexus sound system, an auto-dimming rearview mirror, and an extra USB port. The final package is the Cold Weather Package, that just adds a windshield wiper de-icer.

Many of the features in these optional packages are also available as individual options. The 18-inch wheels, auto-dimming mirror, heated seats, heated steering wheel, and the moonroof are all available as a la carte options. Other such upgrades available are a power liftgate, which is also available with hands-free access, parking assist, a panoramic camera, power folding and reclining rear seats, and triple-beam smart LED headlights.

The Lexus NX 300h is almost identical to the regular NX 300, except for its hybrid powertrain. The standard NX 300 comes with a 2.0-liter turbocharged engine that produces 235 horsepower, while the NX 300h instead uses a hybrid system that combines an electric motor with a 2.5-liter engine for a total of 194 horsepower. It gets much better mileage though, getting 33 miles per gallon in the city and 30 mpg on the highway, while the regular NX only gets 22 mpg city and 28 mpg highway.

The hybrid NX also only comes in an all-wheel drive configuration. Besides those changes though, the NX 300h is almost identical in both standard features and available options to the NX 300. The sole other difference is the available towing package that gives it a 1,500 pound towing capacity.

Deciding between the NX 300 and the NX 300h depends a lot on what the driver is after in terms of the driving experience. The slower engine and the more efficiency-focused tuning on the 300h make it feel a lot less responsive and quick, while the regular NX feels quite energetic.

However, for drivers who don’t consider power an important criterion, the higher fuel economy can be a fair trade. The price difference between the two models is also small - only $1,000 in list price - but the NX 300h is only available in all-wheel drive, which adds a little to the cost. Either can be outfitted quite nicely, so the comfort level is the same throughout, leaving it as a choice of personal taste.

While the NX 300h is the more efficient model of the NX, the 300 F Sport is the sportier version. It uses the same engine as the base Lexus NX, so there is not a significant difference in straight-line acceleration between the two, but the F Sport does add a few nice touches that make the F Sport feel like a more athletic performer.

The main difference is the more aggressively tuned suspension system, which gives the F Sport slightly better handling than the other two models. It also comes with a special leather upholstery for its standard heated steering wheel, special sport seats, paddle shifters, and sport gauges.

It also has a few styling makeovers, including more aggressive exterior elements, metal interior trim, 18-inch wheels and aluminum pedals. It is available in both front-wheel drive and all-wheel drive, just like the regular NX 300.

The Cold Weather Package, Comfort Package, and Navigation Package are all available on the F Sport, as is the Premium Package F Sport, which is identical to the regular Premium Package aside from the name. The individual options are also all the same as the standard model, with the exception of the Adaptive Variable Suspension system, which is an exclusive option for the F Sport.

As with the hybrid model, the difference in equipment and price is not really significant between the Lexus NX 300 and the NX 300 F Sport. It is slightly more expensive, but comes with a few nice extras standard, such as the very supportive sport seats.

Both those who want sportier styling from their car and those who want something that handles a little better can appreciate what the F Sport adds over the standard equipment. For everyone else, the base NX 300 is a slightly better value.

As with most Lexus models, the best choice for most out of the 2018 Lexus NX model line will be the standard NX 300 model. It is very versatile thanks to its variety of optional packages, and it starts below the average starting price point for the segment.

The NX 300 F Sport and the NX 300h offer nice sporty or hybrid alternatives respectively, but the market for both of those is much smaller than for the general purpose luxury compact crossover like the base NX 300.

Enthusiasts should give the two alternative models a try to see if they like their handling or efficiency better, but a lot are likely to still settle on the base model in the end, making it a solid starting point for anyone’s model search.

Buying Tip: To avoid overpaying on a new car, shop prices online first. Get up front pricing before you walk into a dealership. We recommend the following free services; Car Clearance Deals, NADAguides, CarsDirect & Motortrend.
These free services will offer you the lowest prices and supply you with multiple competing price quotes. You will know the best price before you visit the dealer.
Save Money on a 2018 Lexus NX:
Are you Shopping for a New Vehicle? Find the Best Deals with "Free - No Hassle" Prices Quotes.