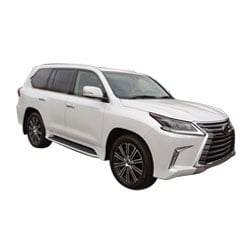 What 2019 Lexus LX Trim Level Should you Buy? What is the Difference Between Trims?

Finding the right luxury SUV is a lot easier said than done since the market is pretty saturated with these types of vehicles. The 2019 Lexus LX is a full-size luxury SUV that stands out against much of the competition. While you will pay a fairly hefty price tag, Lexus gives you a lot of good things wrapped into your chosen package.

There are three different trims to choose from. At the beginning of the line-up, you have the base LX 570 Two-Row. There is also the LX 570 Three-Row if you need the extra seating. At the top of the line is the stunningly gorgeous Inspiration Series. These seven-seaters are beautiful but will cost you over $100,000, which is why most buyers will likely stick to one of the regular LX 570 models.

The LX 570 is powered by a strong 5.7-L V8 engine that is able to generate a solid 383 hp and 403 lb-ft of torque. It gets paired up with a standard 8-speed automatic transmission and a four-wheel drive drivetrain system. Some of the shared standard mechanical equipment includes automatic load leveling, a height-adjustable adaptive suspension, 20-inch wheels, hill start assist, Multi-Terrain Select, and Crawl Control.

So, which version of the 2019 Lexus LX is the best fit for your needs? Read through to the end of this comparison review, and, by then, you should have a clearer notion of which LX 570 is the right vehicle for you or if you should get something entirely different.

There are two body styles for the 2019 Lexus LX: the Two-Row (which seats five people) and the Three-Row (which seats eight). Both are equipped with the same 5.7-L V8 engine and 8-speed automatic transmission. They also both get a combined 15 miles per gallon, which is fairly typical for this segment. Other standard mechanical features that both the Two- and Three-Row 570 models share include speed sensitive power steering, a rack and pinion steering system, power steering, an independent front suspension, a live rear suspension, a stabilizer bar, and 20-inch alloy wheels that come with all-season tires.

On the inside, you get a lot of the same luxury and convenience features on both of these vehicles. Standard infotainment features include Bluetooth connectivity, a 9-speaker sound system, real-time traffic information, a trial subscription to SiriusXM Satellite Radio, an auxiliary input jack, a DVD entertainment system, a 12-volt power outlet, and a telematics system. You can also find plenty of other creature comforts, such as heated front seats, a power sunroof, and a tilt-and-telescoping steering wheel trimmed in leather with multiple controls mounted onto it for easy access. Also, you get standard multi-adjustable power front seats, folding second-row seats, dual zone climate control, an interior air filter, tinted glass, voice command recognition, an automatically-dimming rearview mirror, and a multi-functional remote.

The biggest and most obvious difference between these two trim levels is that one offers a third row of seating while the other only has two rows. This does mean that there is a bit of a price jump between the LX 570 Two-Row and Three-Row. While the Two-Row has a starting MSRP of $86,080, the Three-Row's starting price tag gets hiked all the way up to $91,080. That extra $5,000 is basically just for the extra row of seats since basically everything else is the same on these two trim levels.

Compare the 2019 LX Three-Row vs the Inspiration Series. What is the difference?

As far as the engine goes, you will find the same 5.7-L V8 engine equipped on the Inspiration Series. Like the LX 570 Two-Row and Three-Row, it gets 383 hp and 403 lb-ft of torque, is matched up with an 8-speed automatic transmission, and comes equipped with four-wheel drive. And, like the two lower trim levels, it can tow up to 7,000 pounds and be optimized for some moderate off-roading adventures.

The inside of the Inspiration Series is striking as it juxtaposes white and black quite exquisitely. The Inspiration Series is given a black headliner and stark white leather seats. The seats are both heated and ventilated for your comfort, and there is an advanced climate control system (with a whopping grand total of 28 vents thoughtfully placed throughout the vehicle's interior) that works extremely well at heating and cooling all areas of the cabin. An air filtration system comes standard, and it helps to prevent allergens from getting into the cabin. Also, there is a smog sensor. When it detects the presence of smog, this system will automatically kickstart the recirculation mode, which is what keeps pollutants from the outside air from getting into the LX Inscription's beautiful cabin.

A rear seat entertainment also comes equipped on the Inspiration Series so that passengers in the second and third rows of seats can enjoy watching their favorite movies on a screen. The 9-speaker sound system that comes on the LX 570 trims gets swapped out in favor of a premium audio system. A head-up display also gets added into the mix. Another nice little luxury feature is the refrigeration unit that gets put into the center armrest. You even get fancy illuminated LX puddle lights just to show off a bit.

Choosing the right 2019 Lexus LX trim level might be easy for some buyers. In all honesty, the LX 570 Two-Row is a great choice if you only need seating for up to five people. It is stocked up with a ton of standard creature comforts and safety features, so you will not have to worry about spending even more money on equipping optional stand-alone features and packages.

Of course, if you want to add packages, the only one you can add is the Luxury Package. This package comes with four-zone climate concierge, upgraded semi-aniline perforated leather trim for the cabin, heated and ventilated front- and second-row seats, and LX projector door lamps. None of these things are really necessary, but they do add to the sense of luxury you get on the LX 570.

There are also some stand-alone features to consider adding to the LX 570. A leather and wood trimmed steering wheel and 21-inch split-10-spoke alloy wheels are available for both trims. The Three-Row has added options for a color head-up display, a cool box, a wireless charger, and a dual-screen rear entertainment system.

But, really, the Two-Row should suffice unless you absolutely need the extra seats. In that case, the LX 570 Three-Row should do just fine. Granted, there are less-expensive luxury full-size third-row SUVs out there, but, with the Lexus, you are paying for the prestige that comes along with the name.

Save Money on a 2019 Lexus LX:
Are you Shopping for a New Vehicle? Find the Best Deals with "Free - No Hassle" Prices Quotes.