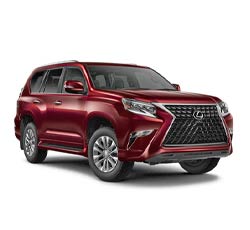 Should You Buy a 2021 Lexus GX? Here Are Some Reasons For and Against

In the crowded SUV market, the 2021 Lexus GX is remarkable for a few reasons. It's frame is similar to what one could find on a smaller pickup truck, and this gives it great capability and a quiet ride. It has a powerful engine that delivers a lot of horsepower, and it has several high-end features in its cabin. Its cabin is really spacious, having room for seven. This model is a nice example of what a luxury SUV can do, which is take charge of the road in style.

Since the Lexus GX has been around for almost two decades, it's been through a lot of changes in its time. For 2021, the SUV has remained the same in terms of how it looks. Lexus has brought this model more in line with other models by making Amazon Alexa a standard part of the infotainment system. Available on mid-level trims is a heated steering wheel wrapped with wood and leather. Most notably, there's a new package for this model year. The Premium Plus is a package that can be used to enhance the Premium trim. It's a good option for people who want power-operated seats in the third row and a premium audio system, but don't necessarily want to spend the money on the Luxury's extra components.

1. A Good Amount of Power

The GX uses a V8 engine that has a displacement of 4.6 liters. It's definitely on the larger side of what can be found in SUVs, and it comes with more than 300 horsepower and nearly 330 pound-feet of torque. This should be enough to keep most customers happy whether they're using their vehicles on adventures in the mountains or simply doing regular commutes around town.

Many consumers need larger vehicles so they can accommodate passengers, cargo, or both. The 2021 GX has more than enough space for the majority of prospective buyers. Leg room in the middle row is about 34 inches, and the third row provides almost 30 inches of leg room for two passengers. Total cargo capacity is nearly 65 cubic feet when all the rear seats are folded down, and there are roof racks that can be used to secure bulkier gear.

The Lexus GX can either come with a bench or captain's chairs in its middle row. This gives people the option of having accommodations for six or seven people. For some, six seats is enough, and the captain's chairs can give people more room to move around. Even if the bench seat is selected, people can easily get into the third row because it takes about a second to fold the middle seatbacks down. The bench has a 40/20/40 configuration, so each seat can be folded down independently of the others.

4. Can Be Used for Hauling Cargo

More than just a SUV that looks the part, the GX is a sturdy, strong vehicle. Its body-on-frame construction helps a lot in this regard. This Lexus model can come from the factory with towing equipment, and its towing capacity is an impressive 6,500 pounds. This is similar to what some pickups can haul, and it's far more than many other SUVs can do.

It goes without saying that consumers would expect a Lexus to be nicely appointed. The new GX doesn't disappoint, as it has either synthetic leather (NuLuxe) or natural leather seats. The front seats are power-adjustable, and they can be heated and ventilated. Illuminated door scuff plates are an option and can add to the overall ambience, and passengers will appreciate it if the available heated second-row seats have been installed. A power moonroof is standard, helping the SUV feel more bright and airy.

6. Exterior Look Can Be Enhanced

All trims of the GX come with illuminated running boards and premium LED headlights. Plus, the model manages to look graceful and athletic at the same time. If anyone prefers a vehicle with a more unique appearance, there are some available finishes. The Sport Design Package includes a dark gray finish on the front fascia and rear valance, a gunmetal finish on the exhaust tip, and dark gray 19-inch wheels.

Lexus has made a conscious effort to keep people safe in its vehicles. The GX is built with the Lexus Safety System + package. It consists of various monitors and advanced components that can be proactive about protecting people. Through adaptive cruise control, the GX can adjust its own speed to maintain safe distancing, and the high beams can turn on and off by themselves, depending on the situation. The GX can hit the brakes if necessary to avoid a frontal collision with a vehicle or pedestrian, and it comes standard with blind spot and rear cross-traffic monitoring. An available system is Intuitive Parking Assist, which can make it much less likely to pick up scratches and dents while maneuvering in small spaces.

The standard configuration of the Lexus GX is pretty solid. The SUV has all-wheel drive with active traction control, sits a good distance off the ground, and has an engine that can pull it through a range of conditions. For those who plan on spending a lot of time on the trails, there's an available Off-Road Package. It comes with Crawl Control, a protector for the fuel tank, a special cooler for the transmission oil, and different drive modes that can be optimized for sand, snow, and mud, for example.

9. Navigation Available on Every Trim

Navigation is a sought-after component. It can be so convenient to have a mapping system built into a vehicle because this saves people from having to keep looking down at their phones for directions. The higher trims come standard with navigation, and the base model can be upgraded with a Navigation Package. It includes Lexus's Enform Destination Assist program, which is basically a 24-hour concierge service that can be used to find specific locations like restaurants and landmarks.

Lexus uses Enform technology. This allows people to access certain mobile apps through the screen in the vehicle. Amazon Alexa is also included so that people can look up all kinds of information. Voice recognition makes it easier to access and control certain features on the infotainment system.

There has been a recent trend to make more eco-friendly vehicles, including hybrid SUVs. Clearly, the Lexus GX has not been part of that trend. It only earns 15 miles per gallon in the city. On the highway, it does a little better, but not by much. Its highway fuel economy is still just 19 miles per gallon. Having a combined mileage of 16 miles per gallon is nothing to get excited about; rather, it's going to be something that people have to look past if they're interested in the GX.

2. No Other Engine Available

There are many SUVs in the market that offer more than one engine. This gives people more control over their next vehicles can do, and it extends the market reach of those models. People who are satisfied with smaller engines can save money and go with the standard engines, and those who like power can pay extra for better engines. With the GX, there's only one choice, and this might not make people at either end of the spectrum very happy.

3. Where Are Apple CarPlay and Android Auto?

Anyone shopping for a new vehicle will have heard about Apple CarPlay and Android Auto. Unfortunately, these components are not a part of the 2021 Lexus GX even though they're widely found on other vehicles, including some of the most affordable ones. It doesn't really makes sense to leave out this type of smartphone compatibility, especially since many other Lexus models have these programs.

It's hard to find too many disadvantages in luxury SUVs. The market is crowded, but there are some ways in which the Lexus GX pulls ahead of comparable vehicles.

The GMC Yukon is a beast on the roads and comes with two available engines. However, it doesn't have the refinement that the GX has. Its base model only has cloth seats, and that lowest trim doesn't come with available heated and ventilated front seats like the GX does. Also, many versions of the Yukon have third rows that are smaller than the one in the GX.

First of all, Infiniti's QX80 is much more expensive than the GX is. Even in the luxury market, price matters. People have to pay more for four-wheel drive; otherwise, rear-wheel drive is standard. When set up with four-wheel drive, the QX80 does even more poorly than the GX does with fuel economy. In the city, the Infiniti earns only 13 miles per gallon, so its monthly gasoline bill is pretty much guaranteed to be sky high.

The GX would be a good purchase for any customer who wants an upscale vehicle that has three rows of seating and can confidently navigate its way through difficult terrain by relying on a high-quality all-wheel-drive system. There are only three trims of the 2021 GX, but there are plenty of options that people can take advantage of. Many of these available options are sold as packages. Considering the amount of money that people are prepared to hand over for a luxury SUV like the GX, the additional few thousands of dollars for navigation, for instance, is likely to be acceptable by many people.