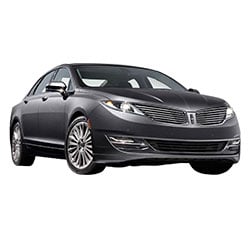 Should You Buy a 2016 Lincoln MKZ? Here Are Some Reasons For and Against

Marketed as a midsize urban Sedan, the 2016 Lincoln MKZ is designed for convenience and a smooth cruise on highways and cities. A lot of its controls are brought closer to the driver, allowing quick commands to be executed just by the touch of a button or voice activated controls. With a perfect balance between modern technology and artistic aesthetics, this is definitely a car to look forward to for the midsize fans.

Of course there are potential rivals to the 2016 Lincoln MKZ and critics predict a stiff competition with alternatives like the 2016 BMW 3 Series and the 2016 Audi A4. So what will warrant the market consumer to forgo the rival options and even consider an upgrade from the 2015 Lincoln Hybrid?

At a glance, the Lincoln MKZ 2016 is definitely a beautiful car. The exterior looks sleek and pretty streamlined with a front that reminds you of an Audi. Top of that, there is plenty of colors to choose for the exterior: Ingot Silver Metallic, Black Velvet Metallic, white Platinum Metallic, Magnetic Metallic, Ruby Red, Platinum Dune, Guard metallic and Luxe Metallic.

The inside of the Lincoln MKZ 2016 is quite posh, and isn’t badly off when compared to the Audi or BMW. The front seats are fitted with heat-technology and additional heating for the rear seats can be installed on request. The driver is allowed to communicate with most of the car’s functions, thanks to the inbuilt Touch Infotainment System; touch screen interface, two USB ports and Bluetooth.

4) Easy to Drive and Control

On the road, the car is fitted with rear parking sensors and cameras for precise parking in tight spots. The sedan also has an in-built blind spot monitoring system to let the driver know when cars approach their sides. The headlights are quite techy as well. They are designed to turn with the vehicle’s motion and pierce through fog and heavy rain maintaining a clear view of the road.

Compared to the 2015 hybrid, this new 2016 Lincoln MKZ has all the trunk space you can ask for. The sedan has a passenger capacity of 5 and passenger volume of 96.5 (cu.ft). Shoulder room, leg room, and hip room are quite spacious too.

Cruising along the highways and city roads is never complete without your favorite music playing out state-of-the-art music systems. The Lincoln MKZ 2016 has an FM stereo, MP3 player, CD player and built-in auxiliary input and satellite radio. Premium surround system and HD radio can also be provided on request.

The Lincoln MKZ 2016 is designed with a 4-wheel ABS system that applies to all the Disc brakes fixed on all wheels. Also included is brake assist, electronic stability control, and lane departure warning. To protect against impact, the Sedan is fitted with airbags on the driver and passenger seats, sides as well as rear head air bags. There is in-built pressure monitoring system to always alert the driver when pressure levels drop in the wheels.

The Lincoln MKZ 2016 tries to bring all the comfort it can to its occupants. It includes an onboard climate control monitor, A/C, and advances Dual Zone A/C. A wireless hookup for cell phones is available for hands-free communication. Others amenities the consumer may appreciate include:

The Lincoln MKZ 2016 packs 240 horsepower and an automatic six-speed transmission box. Under the hood is a 2 Liter 4 Cylinder engine with turbo-charge. On request, the Sedan can be tweaked to a 300 HP engine with a 3.7 liter V6 engine. It definitely gives the Audi and BMW a scare from horsepower to turbo-charge.

The Lincoln MKZ 2016 retails around the $30,000 mark, which is the same price tag the BMW and Audi are bunched in. So this leaves pricing factor out as all three sedan battle for attention on the features they offer. For the consumer who likes speed and engine power, definitely the Lincoln MKZ 2016 scoops the day’s prize.

All is fun and games until you press down the acceleration and your Lincoln swerves about. Critics say the vehicle has a noticeable torque steer problem—a problem that even an underpriced VW GTI managed to solve a long time ago.

2) Not the Best Interior Design

The interior may look cute and flashy until the driver interacts with the infotainment system. The touch features incorporated aren’t the best when compared to the advanced options used in the BMW and Audi. What’s more, the interior design may not be as appealing as one would find in the BMW 2016 Sedan.

If you are planning to carry a tall passenger, its best they sit at the front. The back has limited headroom space which may create some discomfort for taller people.

4) Not Much Has Changed

By putting the Lincoln MKZ 2016 and the Lincoln MKZ Hybrid 2015 side by side, it’s easy to notice that nothing much has changed. It makes one wonder why this new model is to be released in the first place.

After all is said and done, the consumer has a really tight decision to make when choosing between the Lincoln and its rival Sedans. The Lincoln definitely wins on horsepower and engine performance, but as far as aesthetics and spaciousness is concerned, the BMW and Audi are well ahead.
2016 Lincoln Buying Guides: