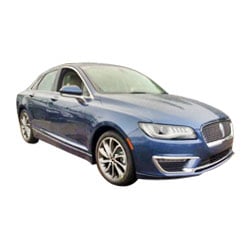 Should You Buy a 2019 Lincoln MKZ? Here Are Some Reasons For and Against

Essentially a more luxurious version of the Ford Fusion, the 2019 Lincoln MKZ ranks among the least expensive midsize luxury sedans on the market. It's a great alternative to today's pricer European models. With the arrival of more standard equipment, it's become an even more stronger value. While the available turbocharged V6 is powerful, some drivers may prefer the hybrid model's fuel savings. Cool exterior styling also helps the MKZ to remain competitive. However, does the new MKZ stack up well against the competition?

This year, a new Co-Pilot360 safety package comes standard on the MKZ. Lincoln has also reduced the number of available trims.

The 2019 Lincoln MKZ comes standard with a 2.0-liter, EcoBoost four-cylinder engine. This is the same power source used in a number of other Ford and Lincoln vehicles. While the engine develops an adequate 245 horsepower, it's strong fuel economy is what makes it so great. According to the EPA, you can anticipate averaging around 21 mpg in the city and 31 mpg on the highway. Fortunately, you don't need to use premium gas.

If you don't want the base engine, Lincoln allows you to get a hybrid engine for no extra cost. Although the hybrid MKZ only develops 188 horsepower, good torque makes it feel quite responsive in real-world driving conditions. Of course, most people will be more interested in the hybrid's fuel savings. Anticipate getting a combined 40 mpg on regular unleaded gas. This makes it just a touch less efficient than the Toyota Avalon.

Lincoln's EcoBoost V6 engine is for the drivers who demand more performance. It's only available on the Reserve II trim. With a total of 350 horsepower and 400 pound-feet of torque resting under the hood, you'll be tempted to punch the accelerator on an everyday basis. When tested at the track, the V6-powered MKZ recorded a scorching 0-60 time of 4.8 seconds. Fuel economy for the front-wheel-drive version isn't bad. You should be able to get up to 27 mpg on the highway.

The 2019 Lincoln MKZ is not a bonafide sports sedan. Nevertheless, it does deliver capable handling. An adaptive suspension system comes standard. The suspension dampers manage to keep the MKZ's body stable when making quick driving maneuvers. Although the MKZ isn't a hardcore performance machine, you should have no issues taking it on a twisty back road. Like most Lincoln vehicles, the new MKZ prioritizes ride comfort. Even when driving over rough road surfaces, there's very little bumpiness felt inside the cabin.

Aside from the hybrid MKZ, all of the other models come equipped with a six-speed automatic transmission. It proves that you don't need a sophisticated transmission in order to maximize performance and efficiency. Unlike some modern transmissions, the MKZ's transmission doesn't doesn't have trouble choosing between gears. Whether you're accelerating from a stop or driving uphill, you'll always be in the optimum gear. The transmission's seamless operation definitely enhances the MKZ's reponsivness.

The 2019 Lincoln MKZ's styling is inspired by the full-size Lincoln Continental. It has a special look that makes people stop and take notice. Among the MKZ's most attractive styling cues are its signature front grille and elegant headlamps. A sleek design also helps the MKZ to make a lasting impression. While the base MKZ is a good-looking ride, there are some nice appearance upgrades available. A lot of people will like the 19-inch wheels, which give the MKZ a more athletic stance.

Although the 2019 Lincoln MKZ is not as spacious as the larger Lincoln Continental, most families will find it to be quite relaxing on the inside. There's a respectable amount of space in the back. You'll also be able to easily find a good driving position behind the wheel. While you'll need to spend some extra money, the multicontour front seats are well worth it. Activating the massage function helps make long-distance traveling more enjoyable.

8. Good Value for a Luxury Sedan

In comparison to some of today's German luxury sedans, the 2019 Lincoln MKZ proves to be significantly cheaper. Prices start at roughly $36,000. At $45,000, even the range-topping Reserve II trim proves to be a strong value. Some of the standard features include adaptive xenon headlamps, an 8.0-inch touch screen, heated front seats, and an 11-speaker sound system.

Drivers continue to applaud Ford/Lincoln's Sync 3 infotainment system. The revised version is even better than before. You will like this high-resolution interface's smooth performance. Apple CarPlay and Android Auto come standard, so most of your favorite mobile apps will be readily available. Because the SYNC voice controls work so well, you can operate some functions without using your hands.

The 2019 Lincoln MKZ scored a good rating on all of the federal government's critical crash tests. Aside from boasting a five-star overall safety rating from the NHTSA, the new MKZ also now comes standard with a comprehensive Co-Pilot360 safety package. Automated emergency braking, blind-spot monitoring, and lane-keep assist are all included.

1. May Not Be Sporty Enough for Some Drivers

As mentioned earlier, the 2019 Lincoln MKZ is based off the Ford Fusion. While the MKZ handles reasonably well, it still may not be sporty enough for true driving enthusiasts. If you're looking for a more performance-oriented sedan, check out the 2019 Cadillac CTS or the all-new 2019 Hyundai G70.

2. Interior Is Not Extravagant

While the 2019 Lincoln MKZ doesn't feel like an economy car on the inside, many of its competitors boast a nicer cabin. This is especially true for the base model, which is only a touch more upscale than the Ford Fusion. You'll notice a lot of plastic components surrounding the interior. In order to get genuine leather upholstery, you must step up to a higher trim.

If you're craving a tire-smoking performance, expect to be somewhat disappointed with the hybrid version of the MKZ. It's designed to limit your number of trips to the gas station opposed to delivering a powerful performance. Although the hybrid-powered MKZ recorded a competitive 0-60 time of 8.7 seconds, there are much quicker hybrid luxury sedans on the market.

Unfortunately, the MKZ's standard xenon headlights only received a "Marginal" rating from the IIHS. Although the headlamps will adequately illuminate the road at night, they are still not the best. LED headlights are available as an option on the top-of-the-line Reserve II trim.

5. Could Benefit from More Headroom

There's ample legroom for your backseat passengers. However, headroom is compromised by the sedan's low roof. The available panoramic sunroof further cuts into the MKZ's headroom. This could be an issue for the drivers who have tall family members.

Before you go out and spend the money on a new 2019 Lincoln MKZ, test drive the Ford Fusion. Although some of the MKZ's luxury features aren't available on the Fusion, you stand to save a bundle of cash. A well-equipped Fusion SE costs less than $28,000.

You should also consider the 2019 Lexus ES, which has been fully redesigned. Although the Lexus ES does not offer AWD, its spacious cabin and standout reliability will appeal to a lot of people.

Among the best cars in the segment is the 2019 Mercedes-Benz C-Class. It has an especially elegant cabin. The C-Class also gives you several powerful engines to choose from. However, you must factor in this German luxury sedan's steeper price.

After test driving the new 2019 Lincoln MKZ, you may find it to be a great choice. While the base engine isn't bad, you'll have a lot more fun with the turbocharged V6. A lot of car shoppers will also like the sedan's Continental-inspired styling. The new model now comes standard with a Co-Pilot360 safety package, so you no longer have to pay extra for driving aids like forward collision warning.

Save Money on a 2019 Lincoln MKZ:
Find New Car Clearance Prices - Many Vehicles are Selling Below Dealer Invoice Prices.

Every dealer offers a secret price. Many prices are below invoice. Find yours here.
2019 Lincoln Buying Guides: